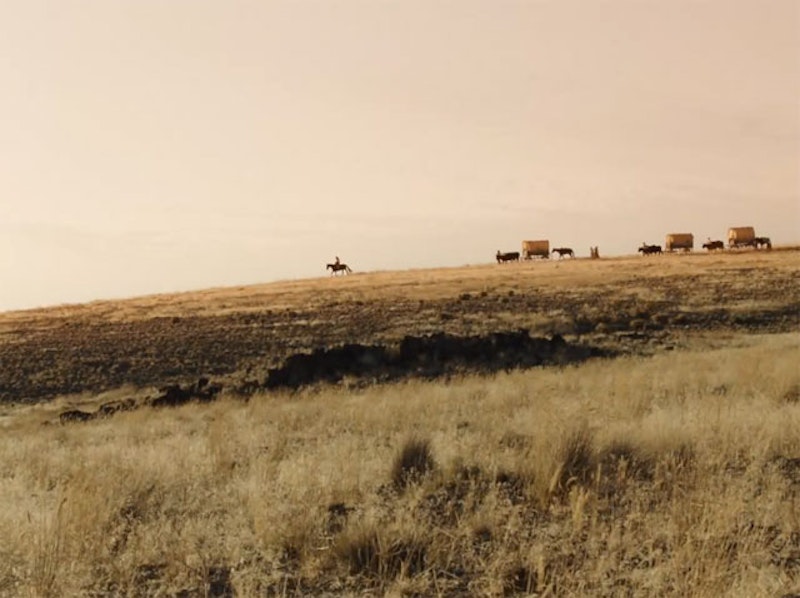 Let’s get it out of the way: Meek’s Cutoff, the new film by writer-director Kelly Reichardt (Old Joy, Wendy & Lucy), is the most gorgeously shot movie I’ve seen in at least a year. From the first frame, the uncharted west is the star of this movie: milky, orange clouds wisp gently across the moon as pioneers cross the plains, never failing to look dirty, tired, and unhappy. That’s more or less the bulk of Meek’s Cutoff, an hour and 40-minute meditation on isolation and disorientation that’s more often numbing than entertaining.

A small group of pioneers is traveling through the Oregon desert with dwindling rations, little food, and less and less optimism every day. Their hired escort, Meek (Bruce Greenwood), is getting them lost, and every day they’re more and more off track. They walk. They sit. They stare into space. Eventually they find an Indian. They capture him, fuck with him a little bit, and then begrudgingly take him along when one of the group suggests he may know where water is. The language barrier makes communication almost impossible, adding to their sense of alienation and distrust. This murkiness extends throughout: the ending is unsatisfying, but not unexpected. The contemplative pace of this movie is almost punishing at times, and that made me feel like one of the pioneers: bored, lonely, empty. On those grounds, Reichardt’s picture is a success: Meek’s Cutoff is a visceral depiction of pioneer life and profound loneliness.

Too bad it almost put me and everyone else in the theater to sleep. I applaud Reichardt’s fly-on-the-wall vision and Chris Blauvelt’s truly operatic cinematography, but unfortunately this movie works better on paper than in practice. Sometimes it feels symphonic, with stunning wide shots of our wanderers covering ground and a superb atmospheric soundtrack a-la Jonny Greenwood’s There Will Be Blood score. But most of the time it just feels turgid, and with nowhere to go, nothing to do, and nothing to talk about, so much of the character development and thematic content is suggested or implied, and it leaves the viewer in the position of having to figure out for himself what the whole thing was about. The ambiguous ending suggests that this film is about the journey rather than the destination, but without compelling content, Meek’s Cutoff is like a moving painting: beautiful, but dead.

You may say this was Reichardt’s intention, to portray brutally the endurance and loneliness of the old West and the confusion of early settlers. Certainly possible, but Meek’s Cutoff breaks the cardinal rule of filmmaking, and that is “keep it interesting.” I don’t care what it is; if it’s engaging for an hour and a half, it’s a quality film. Meek’s Cutoff works as an art piece, on the level of Warhol’s Empire or Sleep movies, exercises in conveying pure tedium. But as a film, it fails to win the audience’s affection and their attention.