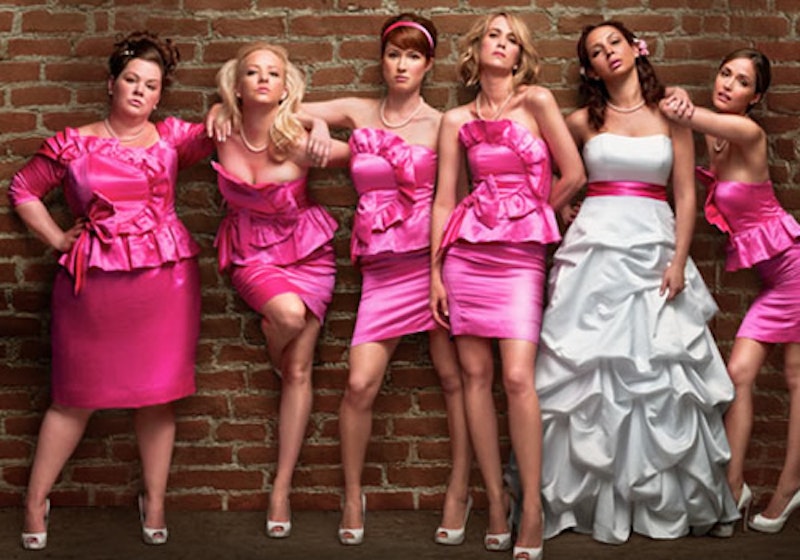 Be grateful for Bridesmaids. It’s one of the funniest comedies in years.

The ultimate Kristen Wiig moment may be this: pretending that you don’t have to throw up when you’re ready to upchuck your toes. She’s an artist at unsuccessful prevarication, at refusing to admit the obvious, at struggling to hide what she can’t hide. So in Bridesmaids we find Wiig with sweat crawling down her gray face as she gazes at a Tic-Tac. Eat the Tic-Tac and she throws up; refuse to eat it and she admits that she’s sick, that her lunch group’s diarrhea and vomiting are no coincidence, that she and they have all been hit because of the cute little restaurant Wiig found for them. The scatology is what grabbed the attention of audiences and critics, and it’s spectacular (we’re talking fountains). But it’s really a set-up for this moment, for the tremor that crosses Wiig’s face as she looks at the Tic-Tac.

Wiig reprises her SNL turn as the compulsive one-upper, but in context we see she isn’t so much needy as desperate. When Annie, Wiig’s character, keeps grabbing the microphone to extend her toast to the bride (“Real quick, one thing real quick”) it’s because the bride is her oldest friend and she’s worried the friendship is about to die. Annie isn’t a sneak. She’s sweet and helpless, a decent type too squeezed by life to breathe. She feels her way from word to word, hoping she’ll say the right thing and won’t be found out. This seems to be the default mode for many women these days, so no wonder the film has struck a chord.

Her rival in the toast duel is a glamorous trophy wife (Rose Byrne) who has swooped down on the bride in question, Annie’s friend from childhood (Maya Rudolph). The trophy wife, Helen, is a real bitch. “You’re so pretty,” Annie says when they meet. “You’re so cute!” Helen tells her. In fact, Helen, or Byrne, isn’t all that much prettier than Annie. She’s taller and she’s done up to much better effect. Bridesmaids is a movie about trying to hold it together and doing so against all odds. Helen is one of the few characters who don’t face those odds; when it comes to self-presentation, everything falls in place for her. Otherwise the movie is full of pores and flab; even Jon Hamm, as Annie’s user fuck-buddy, presents a jowl that looks like food left out overnight.

Of course, judging from what women say, the struggle against looking like crap takes up their lives. They’re stuck with it, for the same reason that the typical Wiig character undergoes a leaflike tremor as she moves from word to word: Do the slightest thing wrong and you’ll be found out. One character in Bridesmaids is free from this burden. That’s Megan, played by Melissa McCarthy. She’s fat and boisterous, and therefore a joke, but she gets what she wants. Looked at hard enough, Megan isn’t so much a woman as a man who takes the form of a woman who’s into men. When shown into a high-class fitting room, she admires the plush sofa by lifting it. That’s how she shows appreciation; she has to get her hands on the thing. (“Nice!” she says.) Megan knows her life has paid off because now she’s high up in national security. “I know where all the nukes are and I know the codes,” she tells Annie. In the end, Megan pulls Annie out of her funk by tickling her. I’ll say here that McCarthy’s performance is brilliant. Funny as Wiig can be, nothing in the film is funnier than Megan’s introductory monologue about falling off a cruise ship and being rescued by a dolphin.

Bridesmaids was directed by Paul Feig, a TV veteran best known for creating Freaks and Geeks, and produced by Apatow and some helpers. The script is by Kristen Wiig and Annie Mumolo, though news reports say Apatow made them put in the business about the diarrhea. Supposedly the scene is a concession to guy-comedy needs. If so, I can only point out that The Sweetest Thing, a terrible movie written and produced by women, is the only film I know of that put women through a similar shit bath. What it lacked, among other things, was the Tic-Tac moment, when the big horror of the shit explosion set up the smaller but more piercing horror of the moment when blame must be assigned. That’s what Bridesmaids is about, and it’s a big reason that the film is one of the best comedies to come out in years.