Two Priests Walk Into a Bar...

How does the Korean comic Priest stack up next to the American movie Priest? 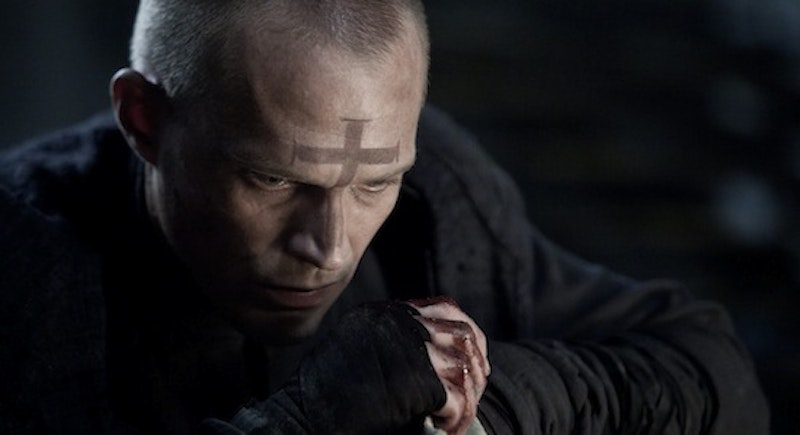 I’ve been assured, though, that the Korean comic Priest, on which the film was based, was quite different. I even had vague memories myself of it’s being different—I read a few pages of it some years back. So when I saw that a collection of the first three volumes of the series were being re-released, I figured what the hey, I’ll give it a try.

And I have to admit, it’s true. Min-Woo Hyung’s series is different from the movie. In fact, it’s so different, you kind of wonder why the studio even bothered to purchase the rights. Was the title “Priest” itself really so great that you’d want to spend some large sum of money on it? Because outside of the title…. Well, the main character here is not an ex-special forces guy turned priestly vigilante, but a historical priest who’s sold his soul to the devil.  The main female lead isn’t a superninja vigilante, but the leader of an outlaw gang. The main villains aren’t vampires but zombies. The setting isn’t an indeterminate neo-Old West future, but the Old West itself. More or less.

The “more or less” is why I assume the filmmakers felt they had to make such radical changes. As noted above, Min-Woo Hyung is Korean, and his grasp of the American context is… let’s be kind and say “idiosyncratic.” He appears to be under the misapprehension that the population of the 19th century West was broadly and devoutly Catholic. He also apparently believes that the Salem witch hunts occurred somewhere in the vicinity of Oklahoma.

It’s possible that Hyung is aware that the Old West wasn’t quite like this, even without the zombies and magic. But he treats the milieu with casual disregard for anachronism that is difficult to imagine in an American creator. There’s no effort to establish an alternate history, or explain why the Americans in this world are so committed to the Counter-Reformation. The scenario just blunders along, medieval imagery and Western genre elements mismatched with cheerful ignorance… the way a clueless American creator might blithely dress his Japanese characters in Chinese clothes.

Of course, the dunderheaded appropriation of, say, Eastern religion in Western texts is often offensive, shackled to a blandly uncaring imperialism. Turning other people’s Gods into plot points is fairly insensitive, especially when the act of appropriation is accompanied by real-life oppression. Even when it isn’t, it can still stick in the craw. As I mentioned in comments on my article about the movie Priest, the use of Christianity in the film was gratuitously sacrilegious. Christianity was turned into a warrior cult promoting genocide, and the Church’s longstanding commitment to peace was mercilessly mocked in the name of an apparently fascist God. As somebody who reads a fair bit of theology and has respect for many Christian thinkers from Kant to Niebuhr to Martin Luther King, I find that pretty annoying.

The comic also appropriates Christian imagery; our hero intones Bible verses and is improbably nailed to crosses. But it’s all so stupidly scattershot it’s hard to get cranky about it. In the comic, Christianity isn’t fascism; it’s just some cool exotic shit that’s sprinkled about as atmospheric gothic filigree. Again, if the Koreans had conquered us at some point I suppose I’d find it presumptuous. As it is, it just seems silly—and even kind of exhilarating in its ludicrousness. The scene where the lynch mob starts accusing the arrested outlaw of witchcraft was so unexpected I actually laughed out loud.

In fact, that scene was probably my favorite part of the book. Outside of that, it wasn’t so great. I like Hyung’s inky, angular art—it has a messily kinetic feel that works well for cowboys shooting zombies to bits. Unfortunately, the writing is less distinctive. This is a basic battle comic in the vein of seinen manga… which is to say, cowboys shooting zombies to bits is basically all that’s happening here. The narrative is barely there, a thin sheen of exposition binding together lengthy detours into gore. The characters are tragic backstories stapled to displays of violence. There are some feeble gestures at plot towards the end of the book, when the timeframe suddenly moves up to the present day for some unknown reason. But none of it is executed with either conviction or skill.

In the end, this is a professional genre product with a couple of interesting ideas that seem to result more from confusion than from imagination—but you take your interesting ideas where you can get them, I suppose. Why anyone wanted to make a movie of it is unclear—though you can see why, if they had decided to make a movie of it, they might jettison any connection to the actual book. Still, the comic is better than the film by virtue of being merely mediocre rather than actively evil.