“Everybody Knows Your Crank Can Hook a Tuna." 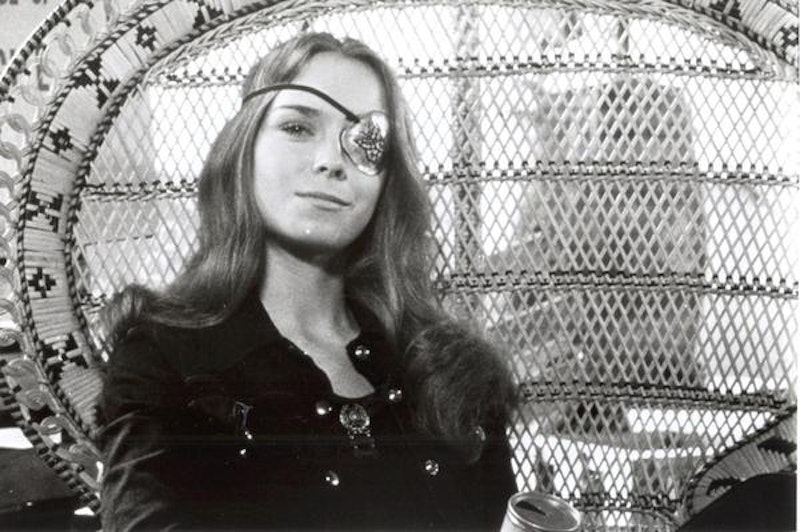 Switchblade Sisters (aka Jezebels) is the last major film of Jack Hill, one of the greatest and least known American directors. Hill worked almost entirely in exploitation film, toiling away mostly for the Corman studios on women-in-prison, blaxploitation, and other genre crap. Switchblade Sisters has everything you’d expect from such a director; there’s gratuitous violence, gratuitous sex, gratuitous T&A, and gratuitously preposterous acting.  As Roger Ebert noted with a sniff, “This movie falls far below Pauline Kael's notion of ‘great trash,’'' echoing the consensus opinion of the film.

Switchblade Sisters bombed on its first release in 1975, and its re-release with much hoopla in 1996 by Quentin Tarantino’s Rolling Thunder Pictures didn’t exactly rehabilitate it. Tarantino’s DVD package has just been re-re-released, and I doubt that’ll change things much either. Rotten Tomatoes gives the film a pretty rotten 53 percent fresh rating, and the intensity of scorn on display from many of the critics is impressive. Stephen Holden of The New York Times sneers, “To watch ‘Switchblade Sisters’ is to visit a never-never land of shopworn media images colliding in a tabloid high school of the mind.” Richard Harrington of The Washington Post fulminates inaccurately, “The acting is so bad that apparently none of the performers ever got another job in the movies.” He adds, with more justice that “the costumes in Ben Hur seem less dated that those on display here.”

Why exactly dated costumes would be a drawback is something I don’t entirely understand; the crazy retro-to-a-world-that-never-was wardrobe seems like a feature rather than a bug to me. My favorite stylistic choice is the gigantic ornate uber-tacky beret things that Lace (Robbie Lee) wears in her hair so she can look like Princess Lea (before there was a Princess Lea) while toting a machine gun in the climactic firefight. And a nod to whoever decided that gangsters should wear day-glo patterned shirts.

As this suggests, the film has many defenders of the so-bad-it’s-good variety. And there’s no doubt that Switchblade Sisters is a delirious camp-fest from beginning to end. From the amped-up woman-in-prison juvie lesbian nightmare to the bloodbath at the roller rink to the macho black female revolutionaries quoting Mao, the film careens from one flamboyant set piece to another. The dialogue is chock full of profane melodramatic quotables. For example: "You know, sooner or later every woman's bound to find out - the only thing man's got below his belt is clay feet." " My old man, God rest his ass, told me once, 'Son, don't ever let 'em push you, becuause once they get you moving, it's awful hard to stop." And of course, "Everybody knows your crank can hook a tuna."

Then, finally, there’s Robbie Lee as Lace—leader of the Dagger Deb girl gang—who speaks all her lines like her teeth have been stuck together and she’s sucking helium through a straw. Her performance starts out outrageous and moves on up to utterly insane, culminating in a full-on wild-haired wild-eyed Shakespearean rage of jealousy and despair. Her deranged, “He was treating me like a little gutter cat!” has to be one of the most ludicrously bile-filled lines in film.

It’s also, counter-intuitively, one of the most poignant, which is why I’m not exactly comfortable with the so-bad-it’s-good reading here. As Tarantino points out in his commentary on the film, Switchblade Sisters for all its goofiness, is a film with some surprising depths.

As in many of Jack Hill’s films, those depths involve a sympathetic and unusually nuanced take on female-female friendships. The movie is about the relationship between Lace and Maggie, the newest, toughest girl in school. The two fall into a quick, intense, love-at-first-beatdown friendship. This quickly turns into a love triangle, as Patch (Monica Gayle), Lace’s former first lieutenant and best friend, tries to pry Lace and Maggie apart. And then that turns into a love quadrangle when Lace’s boyfriend Dominick, leader of the Silver Daggers boys’ gang, falls in lust with Maggie. Despite the fact that he sort of rapes her, she reciprocates his interest. (I discuss the rape at greater length here).

So far that sounds a lot like YA teen girl melodrama, complete with crushes, jealous backbiting, and bitchy rivalry. And it is that in part. But the film balances this toxic view of women’s relationships with a more positive view. In the first place, Maggie and Lace really do care about each other. Lace goes out of her way to protect Maggie from a punitive cavity search in juvenile detention. For her part, Maggie reacts with rage when Dominic mocks Lace’s love letter in front of the rest of his gang. And even though Maggie is attracted to Dominic, she tells him repeatedly and convincingly that her primary loyalty is to Lace.

Moreover, the film makes a thoroughgoing call for feminist revolution. The Dagger Debs are more or less the ladies’ auxiliary of the Silver Daggers and they are mercilessly exploited. The boys’ literally pimp them out to other students, and force them to hold lit cigarettes in their hands so the men can bet on which of the girls will flinch first. Dom treats Lace like crap, sneering at her behind her back to his friends, sleeping with Maggie, and reacting with a torrent of abuse when Lace tells him she’s pregnant (“You think I’m ready to haul freight in some fucking warehouse for two dollars an hour so you can have a little brat suck on your tit? No thanks baby.”)

The solution to these myriad indignities, the film says, is feminism. Maggie’s courage and competence inspires the other girls to toss the boys out of the clubhouse and go it on their own, changing their name from “Dagger Debs” to “Jezebels” in the process. Instead of allying with white men, they switch to a group of black women revolutionaries.  In the triumphal apocalyptic showdown, the multiracial sisters sweep down with superior planning, courage, and firepower to kill the drug lords and politicians who oppress them. Death to the man!

If that were the end, we’d have an unambiguous but simplistic vision of feminist triumph. But Hill’s too clever for that. After the showdown with the man, there’s the showdown with the woman. Convinced that Dom was cheating with Maggie, Lace had betrayed the gang’s attack plans to their rivals. The hope was that Maggie would be offed; instead, Dominic is killed along with Lace’s unborn child. In one of the most painful scenes in the film she lies in her hospital bed and hysterically spins a fantasy of domestic bliss, pretending that Dominic had proposed to her rather than demand she get an abortion. “Can you see me having a kid, hanging around some dumb house doing housework and dishes and diapers?” she laughs in that helium-fueled whine, both pathetic and terrifying.

But the death of her man doesn’t free Lace. While the other girls throw off their false consciousness, Lace clings more tightly to hers, challenging Maggie to a knife fight over the dead jerk who was worthy of neither of them. Maggie’s victory, seen in silhouette, is a kind of exorcism, killing the part of her that chose Dom over her sisters.

Again, this isn’t exactly a happy ending. Lace isn’t just a part of Maggie; she’s a sister herself. By combining the teen melodrama with the feminist parable, Hill complicates both. Maggie never would’ve joined the Debs without Lace; it’s their love for each other that makes the wider sisterhood possible. Until the moment that Lace calls her out to fight, Maggie insists that all she’s done has been for the other girl, and she’s not lying.  Without the personal relationships, sisterhood isn’t possible—but those personal relationships are mired in poisonous sexism and jealousy. The society we’ve got furnishes the materials of the revolution; those are the only materials around. But that means that the revolution is inevitably tainted. Lace’s act of faith—her decision to befriend Maggie—makes sisterhood possible. But Lace’s weakness, and Maggie’s as well, means that Lace can’t stay true to her initial act. She doesn’t see the promised land, and as a result the promise is stained. By murdering Lace, Maggie gives the police the ammunition they need to put her away. The final scene shows her being shoved into the paddy wagon covered in both Lace’s blood and her own. It’s not entirely defeat: the gang seems rededicated to each other, and Maggie is defiant and exuberant. But it’s not victory either.

Stephen Holden concludes his review of the movie by claiming that Switchblade Sisters is “a place where the only thing that really matters is holding onto your unworthy louse of a boyfriend.” This is such an obvious misreading of the film that you wonder what’s behind it. After all, this isn’t Pretty Woman or Yes Man, or Boomerang, or any other of a billion Hollywood romantic comedies where the louse of a boyfriend gets the girl and that’s supposed to be a happy ending. In Switchblade Sisters, the fact that Lace holds onto her boyfriend is not romantic comedy. It’s hyperbolic, melodramatic tragedy.

Perhaps that’s precisely what makes Holden and other critics uncomfortable. Maybe the problem isn’t holding onto the lousy boyfriend, but portraying him as a louse in the first place—and suggesting that Lace’s love for him has not just personal, but social, and even apocalyptic consequences. For all its exploitation goofiness, Switchblade Sisters really believes that sisterhood matters more than men. Thirty-six years after it came out, that’s still an unsettling message.