Is it more Saw than Amistad? 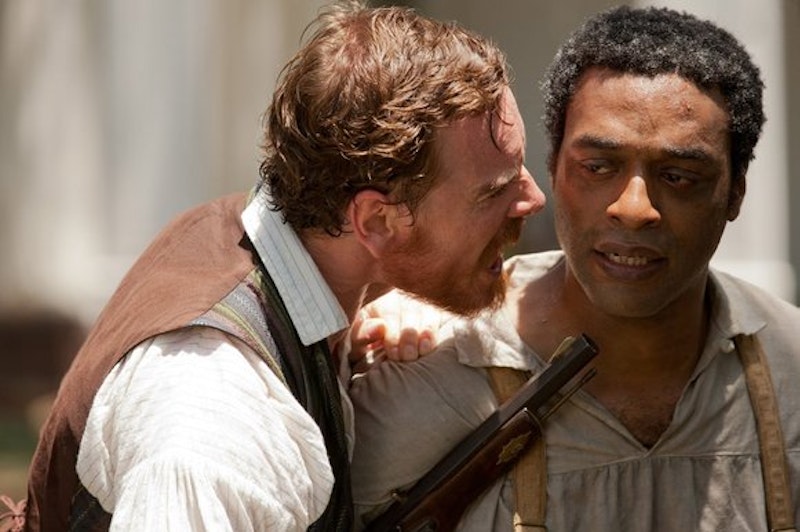 Cultural critics and politicians have long worried that media violence would lead to real-life anti-social behavior. Earlier this month, Armond White, CityArts film critic, may have provided an unexpected confirmation of those fears. White was so incensed by the very violent 12 Years a Slave that, according to a number of witnesses, he allegedly shouted obscenities at its director Steve McQueen during the New York Film Critics Circle awards ceremony.

White denies he was heckling, and I don't want to go into the pros and cons of the expulsion, but I do want to discuss more about violence and its effects, an issue that’s at the heart of White's loathing of 12 Years A Slave. In his review of the film, White says that 12 Years, about a Northern black man who is kidnapped and sold into slavery, confuses "[b]rutality, violence, and misery… with history." He argues that director McQueen is interested in "sado-masochistic display," and compares the results to The Exorcist and torture porn films like Hostel and Saw. For White, the film is detestable because it focuses unrelentingly on violence as violence; "This is less a drama than an inhumane analysis," he thunders, and is especially angry that there’s no sign that the protagonist, Solomon Northup (Chiwetel Ejiofor) has "spiritual resource or political drive." He concludes, "Patsey’s completely unfathomable longing for death is just art-world cynicism. McQueen’s “sympathy” lacks appropriate disgust and outrage but basks in repulsion and pity–including close-up wounds and oblivion."

This discussion of Patsey (Lupita Nyong‘o) seems at first quite confusing. There is nothing "unfathomable" about her despair; in the narrative, she’s a slave who is constantly raped by her owner, causing the jealous mistress of the house to beat and torment her relentlessly. She is violated and abused over and over; it’s not at all difficult to imagine that she might long for death. For that matter, in Amistad, which White admires greatly (it was his best film of 1997) there is an almost exactly parallel situation, in which a woman faced with the horrors of the middle passage kills herself and her baby by falling over the side of the ship. Why is her decision fathomable, while Patsey's is not?

I think that what White is reacting to is the way that violence is or is not framed as meaningful. Spielberg (who White adores) is a filmmaker of compulsive—one might even say facile—lucidity. He is careful to tell you again and again why something happened, and how it fits into the narrative.

Amistad shows numerous examples of violence, including whippings, drownings, stabbings, forced starvation, torture, and on and on—the body count, which includes dozens dead, is substantially higher than 12 Years. But all of these incidents of violence are carefully placed in a recognizable framework. The slave uprising and the murder of the white sailors that open the film, is a straightforward revenge story, nestled comfortably in Hollywood convention. The violence against the slaves is told in flashback in the course of the film's extensive courtroom drama; it is evidence presented to sway the court and (presumably) the movie viewers. Any confusing bit (why did the slavers choose to drown so many of the slaves they planned to sell?) is carefully examined and explained in the course of cross-examinations. Even the suicide of the woman mentioned earlier is girded round with sense—she exchanges a glance with Cinque (Djimon Hounsou) before she goes over the edge, and he nods at her meaningfully, as if to validate and interpret her choice for the viewers. Similarly, Spielberg at first does not translate the Africans' dialogue so that the violence done by and to them is (for most Western viewers at least) unspoken and uninterpretable. But as you go along the film interprets (directly and metaphorically) and contains the violence, until all of it is crystalline. By this alchemy, violence becomes empathy and triumph. The story of the injustice and violence done to the crew is told in order to win them the understanding of the court/movie audience, which in turn opens the gates to freedom—from slavery then and, by implication, from inequity now.

12 Years A Slave, as White says, does not make violence so fathomable. In one of the movie's most striking scenes, Northup's owner attempts to hang him. He’s interrupted and driven off by a man acting on behalf of Northup's former owner, Ford, who has not been fully paid for Northup. The interrupter then goes off to fetch Ford. Even though the hanging has been stopped, no one bothers to cut Northup down. Instead he stands there for an indeterminate, endless time, his feet shuffling on the ground, choking, as McQueen's camera watches mercilessly and the life on the plantation goes on around him, the only respite being when another slave scurries up furtively to give him a drink of water.

Eventually, Ford arrives and releases Northup, but there is never any explanation for the torture he underwent. It has no meaning except itself; the image of it, the length, the spectacle, overwhelms the narrative. Violence here is only violence. Similarly, Northup's kidnapping and ordeal is not presented as leading to a politically hopeful or uplifting end. Northup does not gain by witnessing the violence, and it isn't clear how the viewer gains either. Nothing, as White says, is presented "in order to verify and make bearable the otherwise dehumanizing tales." White insists that "Art elates and edifies," but violence in 12 Years A Slave does neither. It just sits there, an open wound, and when you it ends, you're not enriched or educated. You're depleted. Violence makes you less, not more.

One example of that torture-porn genre with which White dismissively groups 12 Years is a 2009 horror film called Martyrs. The plot centers on a quasi-religious conspiracy of torture. The brutalizers believe that inflicting pain on innocents will beatify those innocents, and transform them into saints, who will then, before death, offer a profound message to the world. White argues that 12 Years "accustoms moviegoers to violence and brutality" because it sadistically refuses to make its violence speak. Martyrs, though, suggests that people are accustomed to violence not through exposure, per se, but through narrative rationalization. Making violence speak—as evidence, as uplift, as spur to empathy—justifies it and excuses it. 12 Years refuses to make violence part of a bigger story. It doesn't want you to see violence and feel elated or edified, like the torturers in Martyrs who whip their victims in the name of catharsis. Rather, 12 Years wants you to look at violence and say, with White, "I wish I never saw it."