From High School Musical to Keeping Her Baby 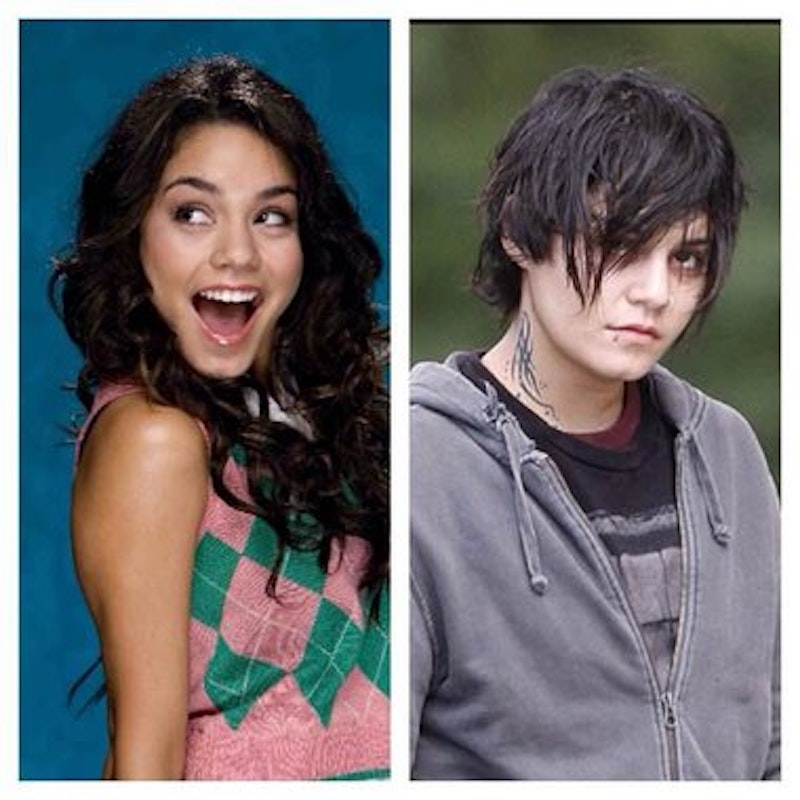 A whirlwind of love, loss, loneliness and drugs, Ronald Krauss' Gimme Shelter is not a far cry from the Rolling Stones song after which it's named. Based on a true story, the film follows 16-year-old Agnes ("Apple") Bailey, through homelessness, abandonment and the ostensible misfortune of her pregnancy. Apple is played by Vanessa Hudgens, who is clearly aiming to shake her Disney incarnation as an affectless teenybopper in High School Musical.

Between the emo hair and a generic accent, Hudgens' best moments are at the start of the film, those that don't involve the use of words. Her facial expressions and body language are believable, unlike the delivery of her lines. Her estranged father Tom (Brendan Fraser) falls flat, apparently unaffected by meeting his daughter for the first time. Their interactions tend to be awkwardly impersonal, and his wife Joanna (Stephanie Szostak) is simply irritating to look at. Apple finds herself in a lockdown facility after a car accident, having not injured her unborn child. She wakes up to James Earl Jones standing over her in a reverend’s suit and offering to aid her and the baby.

Hudgens explodes with an outburst of anguish and casts him away, which was one of the most heartbreaking moments in the film. Who the hell does that? It's James Earl Jones! Luckily, despite the attitude problem, he helps her find a shelter that caters specifically to homeless teenagers who are expecting. Kathy (Ann Dowd) is the mother hen of the mother teens, a religious woman who started the shelter out of charity and her own personal experience. The mention of Christianity isn't too overbearing, although tacky at moments. Most of other teenage mothers in the shelter are better actresses than Hudgens.

Alas, Apple is indifferent to the kindness of strangers. Her mother June (Rosario Dawson), a terrifying drug addict, refuses to allow her daughter to be "taken away" and throws a fit paralleling her daughter’s. Although she’s a psychotic drugged-out bitch, she manipulates the audience into loving her at times, taking them on a walk in Apple's shoes. Like in scenes with her father, Hudgens strains to illustrate the relationship with her character's mother, leaving Dawson to do all the work.

As her baby develops, Apple goes through a striking transformation. Mostly it seems that she hires a hairdresser and a makeup artist who somehow teach her to stop talking with that annoying accent. Her performance plateaus again until the baby is born, when in a surprising turn of events she is poignant and emotional. Her final scene is possibly even Kleenex-worthy.

Gimme Shelter is a decent effort, and not much more. It breathed life into the reality of teenage pregnancy and poverty, but for some reason cast a B-list ex-Disney star to do it. Hudgens isn’t awful, though sometimes I thought Gimme a Break was a more fitting title. The fact that the script is based on a true story is touching, but I would’ve much rather watched a documentary. The fact that Apple as a homeless teenager looked like a rock star proves Hollywood doesn’t love evoking true life in all its ugliness. Maybe Vanessa should get a head start on College Musical before it's too late.