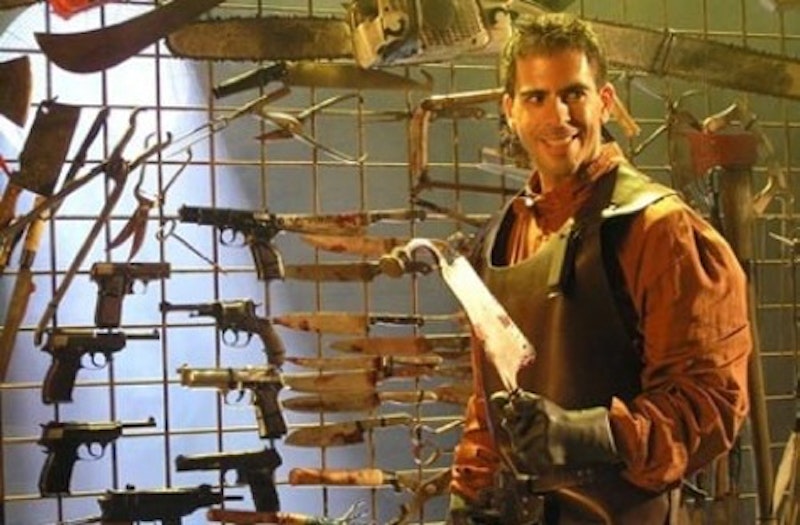 You'd think that graphic violence could never be entertaining in an era plagued by endless wars, multi-billion dollar defense contracts and rape culture. Yet the success of movies like Saw, Hostel, and Kickass prove that modern movie goers actually love extreme gore. Similarly, TV shows like C.S.I. and Dexter have gained a loyal fan base thanks to their raw depictions of murder and torture. To better understand this lust for imaginary blood, I talked to three rising stars of the horror film scene. Their opinions revealed that the new cinematic violence has emerged organically from a combination of established Hollywood formulas and an artistic desire to transform darkness into light.

Sean-Michael Argo has been the driving force behind 15 different horror/sc-fi/fantasy films and an online sword & sorcery program called JourneyQuest. His most recent project is the provocative sci-fi film Cleric. For Argo, more than anything else, it's the Hollywood tradition of film as "grand" spectacle that has influenced the move to use brutal violence as an important part of storytelling: "I think audiences enjoy seeing life, or better said the 'elements of life' presented to them in larger than life ways. This, in my opinion, applies to more than just violence... Anything we would call part of the human experience can, and is, enjoyed by the film and television audience because in those mediums such human experiences are presented in a more grand way. We like seeing things in extremes, because in those extremes the essence of the experience can be communicated and shared. With specific regard to violence, the film and television mediums allow us to explore those destructive themes in a safe storytelling environment."

According to Cleric star Seregon O'Dassey, a psychological oddity has led some to seek entertainment in stories that focus on pain and suffering, and O'Dassey knows more than a thing or two about entertainment. The actress has acted for nearly a decade, including many roles in violent horror films, including the 2013 splatter fest Captured Hearts.

"People like to read about or watch someone else's misery," she explains. "...The Germans have a word: schadenfreude. It's literally defined as a feeling of enjoyment that comes from seeing or hearing about the troubles of other people." This strange concept isn't just found in horror films—even comedies and romances rely on dark voyeurism to compell viewers. But is the exploitation of pseudo-sadism always a good thing? In O'Dassey's opinion, no. "There are some films that do go too far. Everyone is going for the 'shock' value, but the truth is violence and sex do have one thing in common: less is more and what you don't see is more enticing an/or mysterious than what you do see."

The work of writer/director Haylar Garcia is charged with unusual currency. The story in Garcia's new movie, An American Terror, was inspired by "the lingering horror of the Columbine massacre" and the many mass shootings which have occurred in the U.S. since then. Back in 1999, Garcia was living near the suburban Colarado area where Columbine occured, so like most Coloradans, he has a deeper understanding of the Columbine tragedy's roots, not to mention its cataclysmic aftermath. Garcia says that the core intention of An American Terror is "...to speak to the minds of potential teen killers before in fact they become those killers."

When I asked him if a film could be too violent, Garcia gave me an answer that was both philosophical and justifiably defensive:

Violence is something that we react to primally as humans, and thus it can be, and often is, a very important tool for filmmakers to invoke emotion, fear, and dread, which is essential for impact when juxtaposed with the cinematic invocations of things like love, heroism and triumph. The answer to this question is like trying to ask Michelangelo if paint can be too red. The paint must be as red as the artist needs it to be in order to express the idea of the apple he is painting. No film can be too violent in and of itself, it can only be too violent per the taste of an individual viewer, thank goodness people have the right not to watch things that are too violent for them personally... So the simple answer is a film CAN be too violent for some, while NOT for others. And in no sense should filmmakers be censored as a result of this kind of debte because that is a Pandora's Box with a far more insidious intent than even Leatherface.

Before working on this piece I was troubled by today's ultra-violent entertainment. I naively worried that maybe gory films and TV shows alluded to the advent of something far more sinister than a pop trend. Fortunately, after talking to Garcia, O'Dassey, and Argo, all such fears were dispelled. Whether expounding on the power of "schadenfreude," over-the-top Hollywood glitz, or the memory of a national tragedy, each of these artists offered convincing proof that the new blood drenched cinema is a therapeutic coping mechanism, the bi-product of an un-stable world where contextualizing violence through fantasy is just another way to confront the reality of its consequences.