Your Social Media Brand Doesn’t Matter (And Neither Does Mine)

With so many people vying to matter, almost no one does. 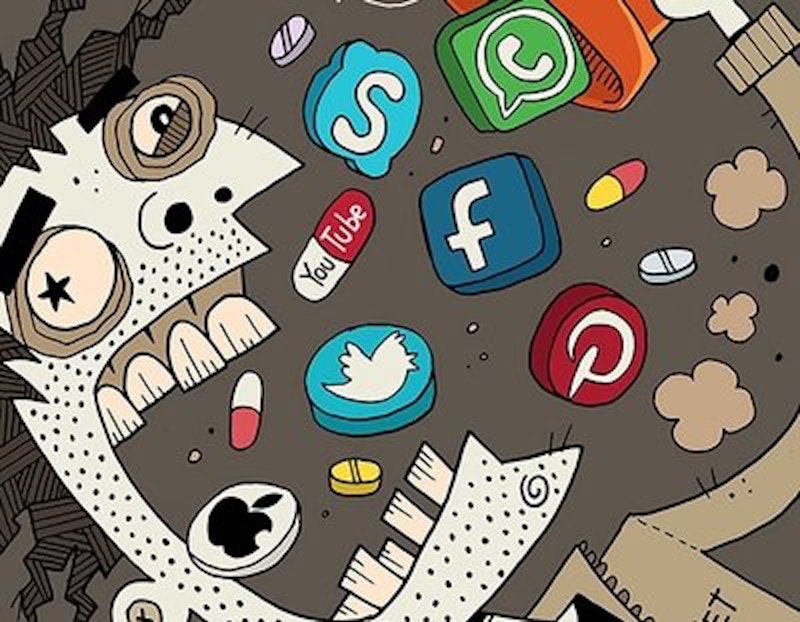 Everywhere one is admonished to "make the most of his life," to "live large," to "live outrageously," and so forth. Soul-searching trips are taken around the world, ostensibly to take filtered photos while engaging in heavy-duty "eat, pray, love"-ing. Yet if success in life is measured by living, we're all doomed to failure. How can anyone hope to save his life?

Jesus, when exhorting others to take up the cross in Matthew 16:25, explains in a rather menacing way that "for whosoever will save his life shall lose it: and whosoever will lose his life for my sake shall find it." The second part of this statement always disturbed me, the for “my sake” part anyway, because it seemed a direct call to martyrdom, without which life would apparently lack all meaning. Danish philosopher Søren Kierkegaard took this seriously, believing that the true Christian—of whom in his opinion there were none, or nearly none—was not simply someone who had a "cross to bear," who suffered unto death, but someone who actually brought suffering upon himself. That is, a life of misery and woe was not enough to win salvation, at least not without a voluntary decision to accept Jesus’s burden.

When I was an adenoidal teenager trapped in a state of affairs that seemed both hopeless and absurd, martyrdom of the sort that many early Christians lusted after struck me as a golden ticket. Why bother facing tribulations I hadn’t even freely selected when I could erase my map in a single glorious moment? I devoted countless hours to plotting out the scene, which went something like this: I’d focus what I assumed were considerable mental and libidinal energies on obtaining an unobtainable partner, who would justifiably reject me in all my domestic violence-forged brokenness, and then I'd spontaneously burst into flames, thereafter ascending into seventh heaven alongside the other Young Werthers who decided to hang up their cleats, empty their inkwells, and mothball their powdered wigs in the wake of similar spurnings.

There was, as it turned out, one problem: this was about the dumbest line of thinking that anyone anywhere could adopt, ever. Real suicides and real suicide attempts are absolutely gut-wrenching and born out of inexplicable pain... which is something I should've realized those many years ago, as I had at that point recently experienced the emotion-numbing aftereffects of a close relative's surprising bid to call it a career. The emptiness and resignation that prompts an action of this sort was absent in my case; rather, I merely wanted the attention that would accompany what I then viewed as the grandest of gestures.

This is where meaningless, unrealizable threats to "end it all" falter. If one does indeed croak, how on earth will he get to bask in all his wonderful obituaries and postmortems? How can he be certain he'll get treated to some third-person omniscient narrative in the grand A Christmas Carol/It's a Wonderful Life tradition? Emotionally threadbare people will be left behind, absolutely devastated people—although undoubtedly fewer than one expects. "Oh yeah, that dude. So, uh, whatever happened to him?" is a more likely reaction. And what of the individual for whom the action was ostensibly undertaken? Can you imagine laying something that heavy on anyone's plate, particularly someone who wasn't even interested in you in the first place? What a terrifying prospect.

Let's return to Matthew 16:25. The critical part here, I've come to believe, is "whosoever will save his life shall lose it." I used to bemoan my fate, such as it was, because I felt I didn't "deserve" such treatment. And if I did somehow "deserve" it, I needed to make a big show of this fact—to act out, to "be a man," to lead a heroic fourth-quarter comeback and defeat those richie-rich Alphas from Prep School High. But what I failed to understand then was that the only way to save your life is to lose it. And not to lose it "for Jesus" in a cockeyed bid for seventh heaven-dom, but to lose it right now, in your own lifetime.

The past hundred years have been referred to, rather neatly, as the "century of the self." Now each person has the chance to achieve virtual divinity—in the Gilles Deleuz-ian sense, he or she can easily become a cancerous body without organs (BwO) grasping endlessly after the most selfish desire-patterns. These BwOs victimize others and are themselves victimized, but more importantly they see fit to broadcast all of their goings-on as loudly as possible. Each infected BwO demands attention; it’s an attention-getting machine, an esteem-machine, a lifestyle branding-machine.

You encounter the BwO of this sort on social media, sometimes acting as a blaming-machine heaping scorn for its myriad sicknesses at the feet of others. Or they're a shade-throwing machine, an outrage-machine: "Can't you see how victimized I've been and how much your worthless existence affected me? Can't you just suck it up and apologize and help me grow my follows and improve my Patreon grift, you asshole?" These unwell BwOs are all mattering-machines, because they believe their lives matter in ways they cannot rationally describe but can certainly feel. "Why do I need to exercise reason when I have feelings? I feel like I need to be heard, to be loved, to be followed, to be worshipped, to have you contribute to my Patreon grift (which I wish were as much as my rival’s Patreon grift, and perhaps if I throw enough shade at them it will be!)."

By contrast, the healthy body without organs is, in playwright Antonin Artaud's words, "delivered from automatic reactions" and "restored to true freedom." Even if such a BwO is only a hypothetical construct, a horizon of unfettered possibility after which one must seek but never find, the first step toward reaching it is to lose your life while still living. In other words, you can't be saved in this lifetime—which is the only one you'll get—if you're still attached to your life in these times. I don't mean that one should go as far as the New Testament suggests (abandoning all material possessions and renouncing this world is the only proper method toward living as Jesus did, in Kierkegaard's opinion). But I do believe that 25 years of nearly unremitting abuse served one valuable purpose in my life: instead of driving me to a Young Werther-ian fate, it merely prevented me from ever entertaining delusional notions of self-importance.

The great curse of our age, abetted by recent technological improvements, is the rise of this mattering-machine. It's not enough to write; one has to be read. One doesn't just talk; one has to be heard. One's outrage warrants instantaneous redress. But think about it: now more than ever, nothing is read. Nothing is listened to. Voices carry throughout an echo chamber, but one is indistinguishable from another. The controversies of the day flare up like hemorrhoids, and with a precisely similar purpose—i.e., as retribution for the release of too much waste. They vanish just as mysteriously, and can be recalled, like the pain of hemorrhoids past, only with the most assiduous concentration. With so many people vying to matter, almost no one does.

I harbor no illusions that this will be read in full—most of us work for a living, for crying out loud!—but I also harbor no illusions at all. I turned on my high-fidelity speakers, tuned into old Orson Welles radio dramas and 1970s wrestling matches, and dropped out of the lifestyle-branding rat race a long time ago. If the alternative to all this dinful and dissonant public mattering is merely existing, the life I end up saving from following such a path of least resistance might very well be my own.