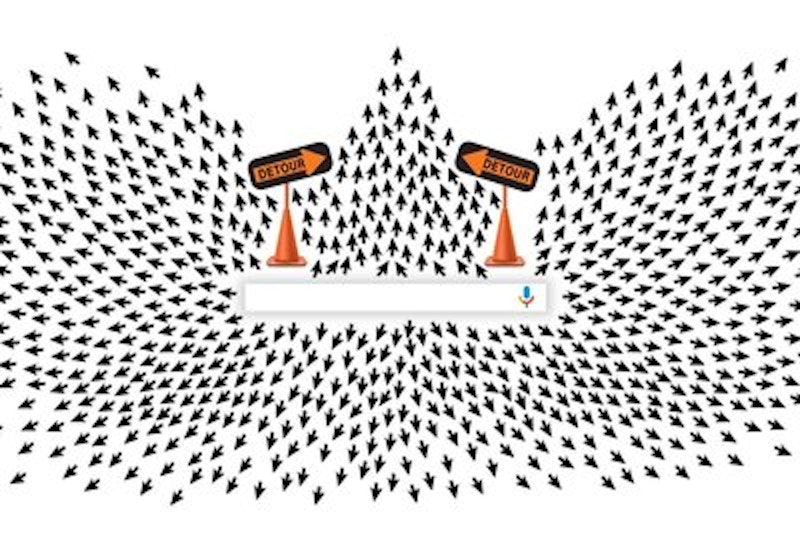 We can talk about the creepy algorithms all we like, but the truth is there are also humans at places like Google, its subsidiary YouTube, and Facebook making decisions that block or allow content from millions of users. When their insular political cultures decide (sometimes with help from advisors such as the leftist Southern Poverty Law Center) that guns, conservatives, or vague apocalyptic rhetoric are bad, they have ample means of making those things less visible.

One must suspect that some such tweak, perhaps inspired by the Florida school shooting but perhaps merely by the establishment’s awareness midterm congressional elections are coming, contributed to a curious variety of YouTube channels being axed, temporarily suspended, or imperiled last week—including ones about bizarre but seemingly harmless topics like “chemtrails.” Was it the fact that many of those channels have a conservative tone that made them suddenly more suspect?

At the same time, searches for “guns” on the Shopping function of Google were briefly impossible, even for items that weren’t actually guns but contained the word.

When the tech giants address such changes, they might offer no explanation at all—or just declare the banned/limited things upsetting or overly controversial. At the risk of making everyone on all sides hate me (as usual), my view has always been that (1) private organizations can ban whatever they like, but (2) they cannot violate agreements with users by banning things they said they wouldn’t (not even if there was no money changing hands and no formal contract, and as an anarcho-capitalist, I don’t give a damn what the law says; I’m telling you what would be right). And it would be in everyone’s interest if they didn’t do these things capriciously or stupidly, regardless of legality.

In short: as an owner, you can set the rules, but you should be forthcoming about what they are. Similarly, you’re allowed to fill your house with poisoned food but not allowed to give your dinner party guests the impression the stuff is edible, not even the tacit impression.

Furthermore, I’d say the argument for erring on the side of demanding transparency from the big tech organizations is getting stronger the more they partner with government, which I think has no rights at all. And partner with it they do. As if it weren’t troubling enough that Google gives political campaign advice, the search behemoth is now also reportedly helping the Pentagon build A.I.-enabled drones, while Amazon/Washington Post/Whole Foods/aerospace owner Jeff Bezos’ operation got some $600 million from the CIA for help constructing a database. You have to suspect that reduces the odds that your Harry Potter and/or weapons manual searches will remain closely guarded secrets.

Meanwhile, the people at debunking site Snopes are claiming it’s not their job to spot “satire” and thus that they were doing exactly what they should when they flagged as inaccurate an article from the comedic BabylonBee that reported “CNN Purchases Industrial-Sized Washing Machine To Spin News Before Publication,” which led to a warning from Facebook to the Bee to stop peddling fake news or else. (It helps CNN whenever the world loses its sense of humor.)

I admit there are some very lame “satire” sites that seem to exist for no purpose other than to do fake stories in the hopes people will believe them, which is troubling (and not funny), but you have to wonder whether Snopes and/or Facebook saw a chance here to play dumb(er) and thereby (try in vain to) help pals at CNN avoid mockery. If so, suppressing satire is an ugly business.

It’s not just the big tech and “fact-checking” companies that seem to be non-neutral referees lately, though. The dating site Bumble, which admirably admits its feminist leanings, is now asking users to report to them any males who have visible guns in their dating profile photos so that Bumble’s team can take unspecified “action” (I hope not a SWAT raid). Pity the women who wanted an easy way to spot someone with whom to go to the shooting range. Not on Bumble!

And while YouTube periodically threatens to nix fringe political pundits such as Syria Girl or Christian populist conspiracy theorists like RichieFromBoston—or Alex Jones who may admittedly qualify as both—the site doesn’t seem as troubled by, say, left-wing professors quoting Jones out of context to make him sound violent or racist. Nor does YouTube mind subsidizing some pretty radical left-wing users’ videos to the tune of $5 million in the name of enhancing diversity, among the subsidized an anti-Semitic 9/11 Truther who turned down an award from Revlon because of that company’s partnership with Gal Gadot, an Israeli.

It wouldn’t be easy to dislodge services like Google and YouTube from our lives, but that’s in large part because they did a great job for a decade or so of feigning neutrality. We took them for granted the way we used to take “the phone company” for granted as a neutral utility without ever shopping around. That kind of complacency can end suddenly, with real market consequences even for giants, if enough customers suddenly stop trusting.