The Voice Behind Mama Murphy 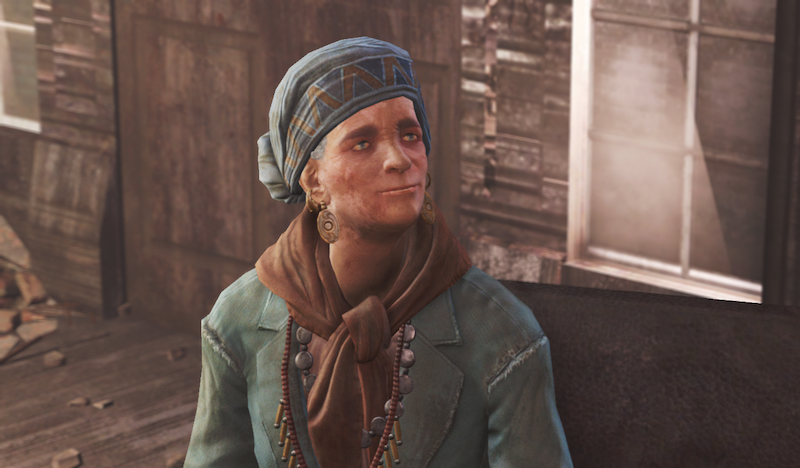 In the first 24 hours after its release, Fallout 4 generated more than $750 million. To put that in perspective, Mission Impossible: Rogue Nation, released the same year, earned significantly less over the entirety of its box-office run. I recently interviewed actress Maya Massar, who voiced the lovable seer Mama Murphy in this blockbuster game.

Splice Today: What did you know about the Fallout series prior to getting the job?

Maya Massar: I knew nothing about the series before getting the job, nor did I know much about it, for that matter, while I was shooting it. The project was listed under a different name and there was intense secrecy until well after it was shot. When I was booked on the job, I was told only that it would entail some “vocally stressful work,” but that all information related to the game—including my involvement, characters, lines, story, etc.—must be kept confidential until the release.

ST: How did you get the job on Fallout 4?

MM: I was called in to audition for what was then a facial motion-capture role. The character of Mama Murphy had a different name, and at that time she was 103 years old, a drug addict and had a Boston accent. I think I was considered for the role in part because I grew up in the Boston area. Not too may people who didn’t grow up there can actually do an authentic-sounding Boston accent. I was excited to audition.

I believe it was Austin Snyder and Timothy Cubbison of Blindlight sound studio who contacted my theatrical agent, Mariko Balentine of Minc Talent. I did a lot of preparation for the role. I take every role very seriously and wanted to develop and create an authentic and living character for Mama. I liked her right away. She was tough, but had a certain sweetness to her, and had obviously seen some pain in her life. I could relate to her. For the audition, a special mo-cap microphone was attached to my head, and magic marker dots drawn all over my face. I love motion capture work, and was thrilled to be working with these guys, even if it ended up being just one audition. But it wasn’t. I booked the job so there was plenty more fun to come.

MM: Having been classically trained—among other things, I studied Shakespeare at the Royal Academy of Dramatic Arts in London—and studied a lot of voice work, I have some mad voice-protection skills. But even so, after a certain amount of time doing Mama’s voice, my own voice was glad to get a rest. Playing Mama was a lot of fun, because I like the character so much. And because the game offers players so many options of pathways to take on their journey, we had to shoot all those options. That is, there was not just one script—and each version of the script called on a slightly different turn for Mama.

Everyone on the project was amazing. They were a really creative bunch, and open to discussion about the character and how she might evolve, which I loved. We ended up with a much younger Mama Murphy than originally imagined. As I mentioned, both Austin Snyder and Timothy Cubbison were the people who I communicated with from the studio. Kal-El Bogdanove was my voice director. We had conference calls with Todd Howard and the game’s lead designer, Emil Pagliarulo, who grew up in Boston.

ST: How long did it take?

MM: Oh wow, I’m not sure I recall how long it took. What I can tell you is that we didn’t shoot everything in one session. I was called back in with months between sessions. Each session was a few hours long. I won’t lie—there was a lot of dialogue to record.

ST: Have you played the finished game?

MM: I’m not a gamer at all—honestly, I wouldn’t even know where to find the game, let alone how to play it. Maybe, some day, some fan would like to teach me. I do hear that it got pretty great reviews, selling like crazy in the first two days it was out. I’m really happy that Mama gets to have a life, wherever she is, even if I can’t find her.

I have, however, seen Mama Murphy on YouTube. To be totally truthful, I have an image of her in my head and heart that’s a bit different from the version I’ve seen online, and I like keeping her that way. I definitely think of her as someone separate from me, and yet she’s also forever a part of me. I mean in a few years I could play her live, no animation needed. I’m that old.

ST: What kind of feedback did you get about your work on the game?

MM: Actually, I’ve gotten very little feedback on the work. A few fans have hunted my email down. Those dedicated folks have asked for autographs and said all kinds of nice things. But, in general, most people who play video games are not out asking for autographs.

ST: Would you work on a game again?

MM: Definitely. My experience on Fallout 4 was great. I was a bit disappointed when we ended up not using mo-cap for Mama Murphy, because I really love that work. But getting to voice the character was a good trip and I’d be delighted to do more game characters in the future.