Speedrunners seemed to share my obsession with The Legend of Zelda: Ocarina of Time, Nintendo's masterpiece. 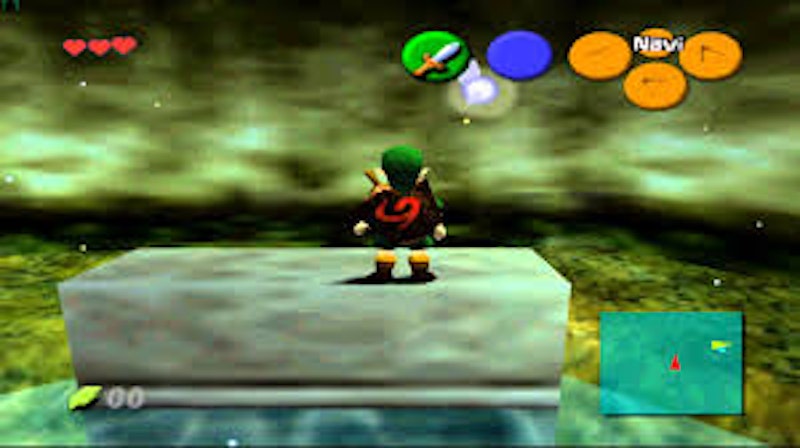 I'm a huge fan of The Legend of Zelda: Ocarina of Time. I've assembled the beginnings of a themed collection in my basement. After descending the stairs, you'll find a framed promotional image of Link and Sheik playing their respective instruments, as well as R. Blanton's beautifully illustrated map of Hyrule. And in a curio cabinet, you can see a replica box for the 1998 classic, a humorous Navi mug, and a working ocarina.

It’s no surprise that I was long fascinated by the speedrunning community surrounding the game. I loved learning about its history—the cheaters, the rivalries and changing tactics. While I knew you couldn't find the Triforce in Ocarina of Time, as a widespread hoax would have you believe, I liked to imagine that there was still more to discover. Speedrunners seemed to share my obsession with Nintendo's masterpiece, spending countless hours exploring every nook and cranny in the hopes of plotting a faster route.

A few years ago, I decided to give their pastime a shot, starting with a video tutorial from Tokyoboi, a speedrunning enthusiast. "This is going to be our first trick," he said. "It comes in the form of Aqua Escape. Basically, what we're going to do here is, we're going to exit out of Kokiri Forest early, without beating the Deku Tree, by going through that warp, right there. Usually, you would need the Silver Scale, I think, or Gold Scale. I'm not sure which one. You need one of the scales in order to get down there."

Tokyoboi explained a number of methods of glitching to the underwater warp. The first was difficult to follow. "You're going to get on this wall," he said. "Z-target it, backflip, side roll and untarget Z. Retarget Z, side-hop right, side roll, untarget Z, retarget Z, side-hop left, side roll without untargetting, slash your sword once, backflip, and then this is the position you need to clip into that wall area. So you're going to side-hop right and press B to jump-slash in midair." If you caught all that, you're quicker than me.

There was an easier way, called the Navi Dive. "Make sure you're on this edge," Tokyoboi said. "Just mash B. After the jump-slash, just mash C-up. You'll talk to Navi, but since Link was moving backwards, he'll fall through the water during this cutscene." After practice, I could pull off the trick.

But later in the video, Tokyoboi performed a move that dashed my hopes. Jumping from the highest level of the Great Deku Tree, he rapidly pressed the pause button so the action progressed frame-by-frame. Moving in midair, he slashed his sword against the wall at a precise moment, bouncing himself onto an otherwise inaccessible area. I'd seen the trick before. But hearing Tokyoboi explain it, and trying it myself, I knew that I’d never have the patience or fine-motor skill to be a speedrunner.

This made me wonder to what degree I share the same obsession with these gamers. Tokyoboi looked like he might’ve been around my age, but many of the premier speedrunners appear to have been born after Ocarina of Time was released. What attracted them to the title? I suspected it was less the game itself than the competition surrounding it. In other words, if Jet Force Gemini was the elite proving ground that Ocarina of Time is, my guess is that's where they would focus.

But I shouldn't make assumptions. While I won't be speedrunning, I plan to add to my collection in the basement. I want a replica Hylian shield, a miniature Gossip Stone and the official Nintendo strategy guide. A while back, I saw a statue of Darunia auctioned for more than $1000. I'd love that too, but like some of Tokyoboi's moves, it's just never going to happen for me.