His talk of sin and morality rings hollow. 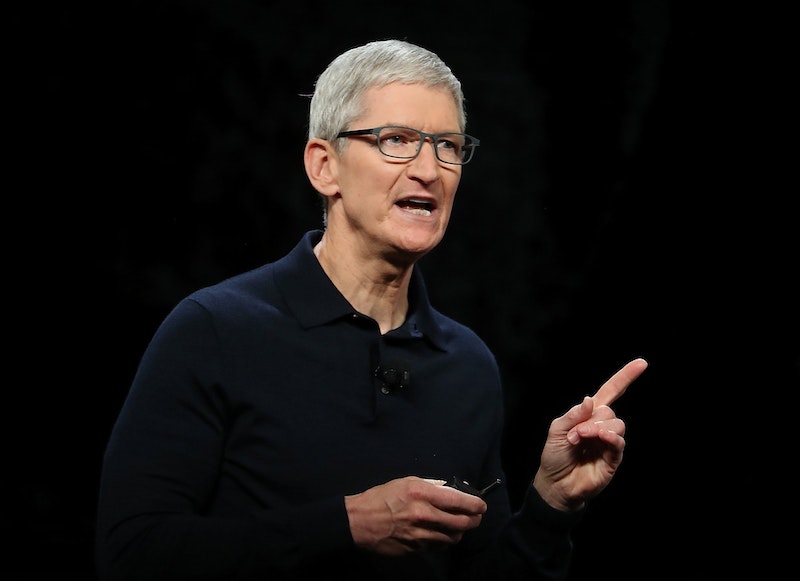 Apple CEO Tim Cook believes that God favors him. “I consider being gay among the greatest gifts God has given me,” he once said. That’s an unusual statement, given that corporate chiefs, wary of having their actions linked to religious beliefs, tend to shy away from such faith-based talk. In his latest proclamation involving religion, Cook said that tech firms that don’t ban certain people and material from social media and tech platforms are guilty of “sin.” "If we can't be clear on moral questions like these, then we've got big problems," said Cook. "I believe the most sacred thing that each of us is given is our judgment, our morality, our own innate desire to separate right from wrong. Choosing to set that responsibility aside at a moment of trial is a sin.” With this nonsensical, disingenuous assertion, Cook reaffirmed his status as a major hypocrite in the business world.

The current Apple CEO bears little resemblance to Steve Jobs. He’s a logistics guy who climbed the corporate ladder by developing cozy relationships with a Chinese regime that locks up hundreds of thousands of Muslims without a trial. According to Bloomberg, workers at the Pegatron iPhone factory in China make an average of $650 to $850 a month. That means that if they had absolutely no living expenses, they might be able to buy the latest version of the iPhone with a month’s wages.

How moral was it for Apple, in 2016, to force 90 extra hours per month on Pegatron workers while reducing their hourly wage from $1.85 to $1.65? And what about the morality of Cook living in luxury while paying others a pittance just because he can get away with it in China? Cook’s presumably convinced that his firm’s activity in China—a moral blind spot for many tech firms—is moral, a conclusion he probably reached via motivated reasoning. You have to wonder about the morality of taking jobs away from American workers and giving them to China, where workers have few legal protections.

Motivated by profit, Cook has Apple doing business in countries like Saudi Arabia, Iran, Qatar, the United Arab Emirates, and India—where it’s illegal to be gay (homosexual activity can get you life in prison in India)—while simultaneously championing corporate boycotts of states passing anti-LGBTQ legislation. Cook’s God gave some in those nations the same “gift” he got (although they may not see it that way), but he won’t use his stature to stand up for them.

Cook was doing his moral preening about sin and morality at a speech he gave after receiving the Anti-Defamation League's "Courage Against Hate" award, although the “courage” he exhibits as a CEO is of the riskless variety. He boasted that Apple has never allowed songs that promote white supremacy on any of his company’s platforms because it’s “the right thing to do,” a simplistic and self-serving analysis that ignores the nuances of the concept of free speech. In the tech world, “the right thing to do” has become indistinguishable from what’s politically correct.

Compare Tim Cook’s fiscal 2017 compensation package of $102 million to the factory worker he pays $1.65 per hour. What God would approve of that? Closing that gap, which Cook created by forging unholy alliances within an authoritarian state, would be the right thing to do, but it would take money out of his pocket. Cook won’t sell white supremacy songs, which generate approximately zero revenue. He booted Alex Jones from iTunes, a cost-free act. Cook’s a major sinner. His approach to business is, per the corporate norm, almost entirely amoral. His moral posturing is offensive and dishonest. Matthew 6:24—”You cannot serve both God and mammon.”