Life in the Valley 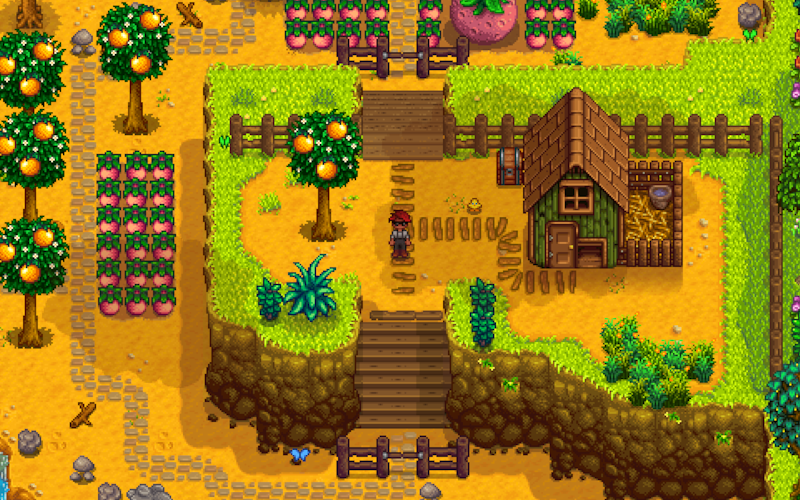 After weeks of hearing friends talk about Stardew Valley, I acquiesced and purchased a copy. I was initially skeptical since my previous attempts at growing crops in the real world were rather unfulfilling. But I was quickly engaged in maintaining my virtual farm and indulging in the idyllic rural fantasy that the game spills over in every detail. I felt the long-lost sensation of being glued to my seat, unable to take myself away from the experience until the following in-game day.

Stardew Valley is an indie farming simulator, reminiscent of the more traditional “Harvest Moon” games that began on Super Nintendo. The player creates a character who inherits his or her grandfather's farm. Tired of the corporate drone life, the player moves to Stardew Valley and is tasked with restoring the run-down farm to health and becoming a productive member of the community.

Gameplay consists of farming crops, foraging, raising livestock, mining for ore in a monster-infested mine, fishing, and interacting with the other denizens of Stardew Valley. These mechanics interweave with each other skillfully to entice the player to experiment with other areas of the game. But it's not just the mechanics and their interactions that are noteworthy. Stardew Valley's conceit of rural escapism is the basis for its appeal. It’s why the game succeeds.

“Design elegance,” helps define this game. Developer ConcernedApe understands exactly what players would want out of this experience. In this way, Stardew Valley manages to achieve its design goals in ways that many bigger games struggle with. The ultimate goal of Stardew Valley, the connection with people and nature, speaks to a common fantasy borne out of current frustrations with modern reality.

However, there should be a lesson in the game's design. In the very beginning, the player's in-game grandfather encourages the player to connect themselves with both nature and people, thematically reinforcing the desire the game appeals to. While attempting to precisely realize the fantasy that Stardew Valley offers would be difficult, the fact that the game appeals to these very human desires means that the best idea is to take a bit of Stardew Valley when you turn off the game.