Can Pepe Ever Truly Die?

Internet culture and the zombified meme. 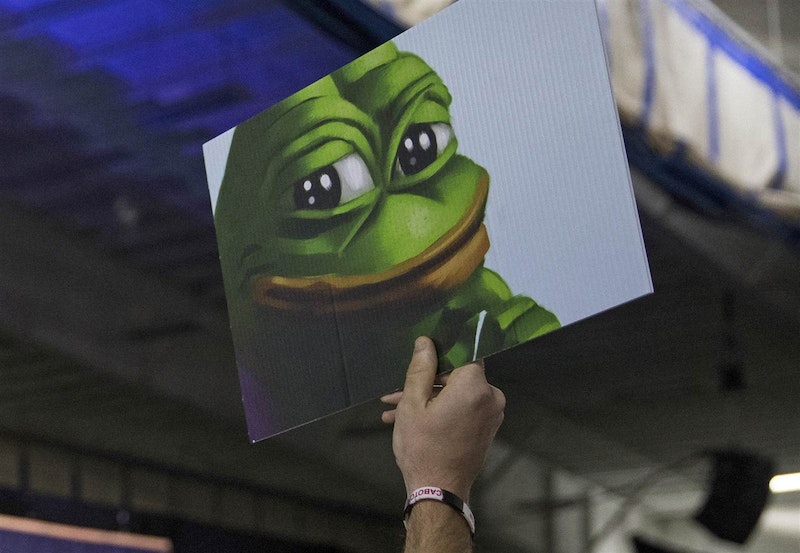 This week brought the death of Internet icon “Pepe the Frog.” Initially a character in Matt Furie's Boy's Club, Pepe became a 4chan darling. Initially, his appearances were benign in nature, associated with reaction images on 4chan's /b/ board. However, in 2015 the meme had found its way to /pol/, a board known for extremist ideology and one of the incubators of the modern alt-right movement. Soon, Pepe was transformed into a white supremacist mascot and spread beyond the confines of chan culture. During the 2016 election, Pepe became the calling card of alt-right ideology and was soon identified as a hate symbol by the Anti-Defamation League, citing its racist and anti-Semitic uses. Both the ADL and Furie attempted to save Pepe, but to no avail.

Furie's latest cartoon depicts Pepe resting in an open casket. While this is obviously meant to communicate that Pepe is dead, alt-right commenters are clearly going to disregard this authorial act. Pepe will persist, at least until his status fades. Question: who does Pepe really belong to? Furie’s relinquished ownership of the character, so is this a solidification of his status as “owned” by the alt-right?

This act of appropriation, transformation, and re-contextualization is a postmodern coup, the “death of the author” maxim in its purest form. Ultimately, it doesn't matter what Furie says because Pepe hasn't belonged to him for a long time. The fact that Pepe has been transformed means that these memes are covered under fair use. Even if they weren't, there's no way that Furie could go after all the people using Pepe. He doesn't have the power that a large corporation like Disney has to enforce copyrights.

In fairness to Furie, this could afford him peace of mind. He can at least express the desire to put the character behind him by depicting him as dead. No one else has been bothered by Pepe's rise as a hate symbol more than Furie, as it was clearly not his intention to produce such a symbol. However, Pepe is likely going to be discarded at some point. Generally, memes fade almost as quickly as they appear. For many months, it seemed like there wasn't going to be an end to Chuck Norris jokes or memes about Harambe the gorilla. But, outside of dedicated subcultures and archivists, they remain as artifacts of another era. The alt-right will probably use the language of memes to eventually obtain a new mascot, likely employing the same level of disrespect they showed Furie's work.