There’s no future for humanity in Zuckerberg’s “Metaverse” or any virtual reality. 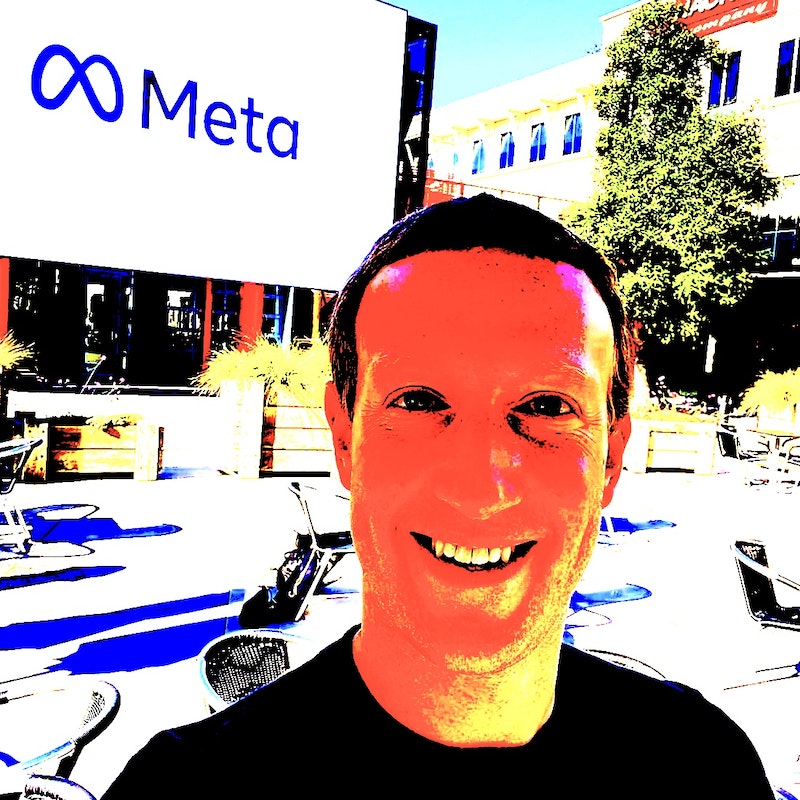 When was the last time you thought about Ray Kurzweil? This dude was everywhere in the mid- and late-2000s, presented as a pop scientist and a modern day Nostradamus—another dude you don’t hear much about anymore—but I haven’t heard a peep from him in years. Just reading the name threw me back in time—what did he get right? First he fucked up and made everyone think that all technology advances at an exponential rate, when it’s really just semiconductors and microchips and shit like that (central in all the supply chain backups). Nevertheless, his prediction of a technological singularity occurring around 2045 seems on pace: Mark Zuckerberg’s “Metaverse,” a corporate rebranding of Facebook a la Clear Channel/iHeartRadio, brings us that much closer to cyborgs.

You could argue we’re already half-robot: is your smartphone as essential to your daily life as your medication? Is it a pressing emergency if you lose it? I’m not talking about recreation or the cost of losing a smartphone, and I’m not being glib, what if you lose your smartphone, will you be able to buy anything? Do you still carry cash? How soon until people stop carrying cards? Once the smartphone becomes as necessary as keys and wallet (or just becomes your wallet), we’ll be able to see the singularity on the horizon. Perhaps Kurzweil will be redeemed: the reason we haven’t heard about him in a while is because he got 2009 completely wrong: besides forecasting an endless dot-com boom, he basically said we’d be living in Jetsons land by then, and by now, turned into gray matter or batteries for The Matrix.

But Meta made me think of him, meaningless name change it may be. Kurzweil didn’t predict the 2008 financial crisis, Donald Trump, ISIS, or the not-so-novel coronavirus, but computers? This guy knows computers (I’m assuming). Zuckerberg, as far as I know a human man, is so devoid of charisma, and his product so viscerally repulsive to so many, is one of our world’s masters. I’m not alone in wishing his trip into virtual reality all the failure in the world, and at the very least, I think most people find this concept, especially when realized by the company formerly known as Facebook, really disturbing and not something they’d ever want to get involved with. But some people will, and they won’t all be “old.” TikTok and Instagram are already depressing and melting the brains of young people across the world, and when a new platform with appealing VR comes along, everyone will flock to it.

Every social media platform is stagnating. TikTok has supplanted everything, but it too will recede, and then what? What is this garbage priming people for? This is more than complaining about “the boob tube” or mere screen addiction. There’s an impasse in social media and communicating online, and people will either ease off or dive into something new. Thank God “Meta” is some of the lamest shit I’ve ever seen, and properly horrifying to most. I don’t know a single person who wants to use virtual reality in any meaningful way, or at all even. Those headsets aren’t even fun as toys. And you expect me to live in one? No.

The world dodged a bullet with Meta, but hack Kurzweil may turn out correct, and he has time to win his singularity bet. 2045? Please. Who knows what will happen in the next 24 years? Everything is already speeding up. The only way to stymie the singularity and the destruction of humanity as we know it is to jump ship completely as soon as possible. A wallet on your phone is one thing, and a wallet implanted in your palm is certainly another, but alternate realities are simply not acceptable. Parallel realities are not acceptable. There’s no universe but this one, and Zuckerberg can have his “Metaverse” and determine all of the rules and consequences for the rest of his life, but human beings will not be a part of his alien ware.