A letter to Mark Zuckerberg. 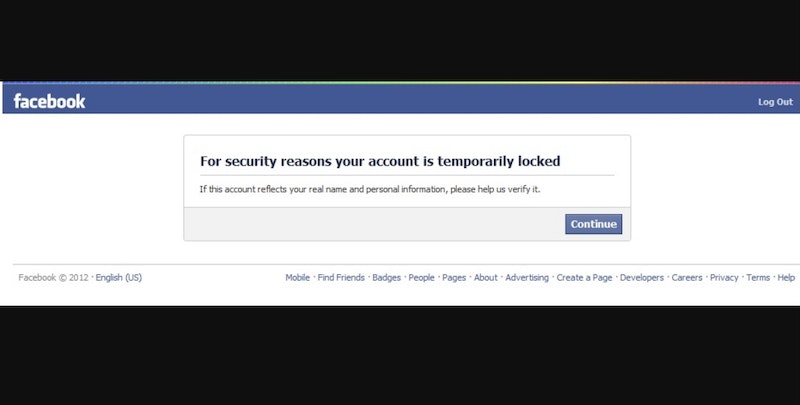 I’ve been locked out of my Facebook account since April 25th, 2022. The ostensible reason is that you have seen some “unusual activity,” which “may mean” that someone has used my account without my knowledge. I was sharing a post at the time, which suggests that the only person using my account was me. The post was about my life and I was sharing it with my friends. You can read it here if you like.

You’ll see that it’s a personal story containing information that only I could know and that would only be of interest to people who follow my work. It’s not about the war in Ukraine, security matters, or a critique of NATO. It’s not pro-Russian or pro-Chinese. It doesn’t question the mainstream media narrative on geopolitical events. It’s just an ordinary story about an ordinary man, sitting on a rooftop in Cardiff in 1973, wearing a ring that he’d forgotten he once had.

The message I received as my account was being locked was that my profile was no longer visible, and that this was done to protect me. How does this “protect” me? I no longer have access to my account or contact with people in my wider circle. This doesn’t feel like protection to me. It feels like abuse.

You tell me that in order to unlock my account you need to see a copy of my ID. This is strange. What if someone were to steal my ID and set up a false account of their own? How am I to know that these messages really come from Facebook? You might be one of those ransomware programs for all I know. In fact, that’s exactly what it feels like: like a ransomware attack in which all of my data is held hostage to extract information from me.

Earlier today a friend told me that they’d received a friend request from me since I’ve been locked out. It turned out that this was a mistake and that he was getting me mixed up with someone else, but it’s worrying nonetheless. Who knows what’s done in my name while I’m not able to monitor my page? Who knows what abuses are being committed when I can’t see what is going on? Excluding me from Facebook makes me more vulnerable, not less. It makes my profile more likely to be hacked and my identity more easy to steal. This is the opposite of protection. It’s exposing me to attack.

I’ve been on your platform for many years. I can’t even imagine how many posts I have put up in that time. Hundreds of thousands: photographs, memories, articles, jokes, opinions, memes, life events, the daily accumulation of a life online. A large portion of my leisure time has been spent on Facebook. You hold material that belongs to me, that’s personal to me, about the birth of my grandchild or the deaths of my mother and father or my retirement. I shared all of this to my friends and followers in good faith, on the understanding that it still belonged to me. Mine is only one of billions of voices out there, but significant to me. How can it be that I no longer have access to my own story?

I’ve tried several times to photograph my drivers’ license to share it with you, but your algorithms always reject my attempts. I did this before, when I was trying to take out advertisements on social and political events. Either your algorithms are faulty or my hand is shaky. All of my attempts have come to nothing, which leaves me stranded, without access to my community.

Is this what we signed up for when we first stepped into the digital world? It’s humiliating to be asked to prove you are who you are by a machine. Your algorithms are badly calibrated if they can interpret someone sharing their own posts as the work of interlopers. The only interloper in this exchange is Facebook. It’s you who’s standing between me and my friends. It’s you who's questioning my identity. It’s you who continues to interpret my ordinary activities as “unusual.”

I wouldn’t mind if I could speak to someone about it. That’s what is so frustrating about the process: the fact that there seems to be no human beings involved at all. Human beings are being questioned, hurt, excluded, but it’s all being done anonymously, at a distance. There should at least be a call center, or someone I could speak to and help me sort this out. I think if anyone were to look at my record, they’d see immediately that I’ve been locked out unjustly and correct the mistake. It would only take one sane, sensible human to undo the lock and allow me access to my account again.

The contradiction at the heart of Facebook is that it poses as public space when it’s privately owned. It’s public in that it depends on the public to share their posts. That’s its purpose. The reason why it became so popular is that in the early days it made sharing easy. Once you could put up a post on Facebook and it would travel around the world. Occasionally posts would go viral: if they struck a chord, if you said the right words, or your sentiments chimed with the public mood. That’s no longer the case. Facebook has been deliberately hobbled. These days posts are only seen by a few. You have to pay to get your material read even by your own friends. It’s impossible to get important information into the public mind unless you have the money to do so. This skews the narrative in favor of the rich and powerful, which is what the internet promised to change. Were we naive to think that it would ever be otherwise? The rich always win in the end. How could we expect a media platform owned by a rich man to ever do anything but promote the interests of the rich?

So what am I to do? I can’t send you ID that meets your criterion. I can’t speak to anyone. I can’t text, email or send you a Tweet. I can’t corner you at a party to ask your advice. You’re the final triumph of the anonymous over the intimacy of exchange. You’re an arbitrary machine that stands in judgment of my humanity. You allow me no foibles, quirks or eccentricities. I must act like a machine to get your approval. I must suppress my excitement and eagerness to communicate in order to comply with your “community standards.” I mustn’t share too much, as this could be interpreted as spam. (On the other hand, if someone pays you enough you’ll share their material as much as they like.)

I can be cut off at a whim, on the say so of an algorithm. I can be ejected from my community, like a criminal sent into exile. I can't argue with this. I can’t complain. There’s no court of human rights I can refer to and get this decision overturned, no court of appeal or moral arbiter. Everything is beyond my power. Everything is in your hands. Is this the age we are moving into now? It’s like the Middle Ages, except that, instead of land barons controlling the countryside, we now have tech barons controlling the digital landscape. You’re part of the new media aristocracy ruling our lives. You produce nothing. You create nothing. You add nothing to the store of human value. All of that’s done by us, your online serfs. We produce the content that gives your digital platform its meaning. We produce the currency that gives Facebook its worth. It would be valueless without us. And yet you rule over us as a Lord surveying your lands, high up in your fortress, exiled from the world.

Unlike me your exile’s permanent. I may not have access to Facebook, but I still have my friends. I can go round to my friends’ houses and get a cup of tea. I can share the news and the gossip, with or without Facebook. Not you. You have no friends. The only people who can possibly understand the depths of your isolation are other billionaires. Billionaires don’t really like each other. They’re rivals, not friends. They live in a permanent state of suspicion of others people’s motives. Does Elon Musk plan to undermine you? Is Jeff Bezos taking your business? What is Bill Gates really up to? You’re neurotic people, wholly lacking in empathy. You don’t get to be a billionaire by trusting other people or sharing your ideas, time or space.

As for me, I’m happy enough. I’ve discovered the real world again. I’m enjoying the spring. The birds are singing and the woods are full of flowers. I have more time on my hands, now that I don’t have to bow to your demands. It’s true that some of my endeavors have been hampered by my lack of access: that I can't share my contributions to Splice Today or Whitstable Views, for example, or that I can no longer see the minutes of meetings held by the Whitstable Carnival Association (of which I am the treasurer). But this is a small price to pay for the lesson I've learned, which is that any material shared on Facebook is unsafe, that it can be stolen on a whim, and that to be in the service of your corporate ambitions is to lose a little of my soul.

Facebook used to be good. Now it sucks. Please fix it or we’ll go somewhere else.