Your Library: The Modern Video Store 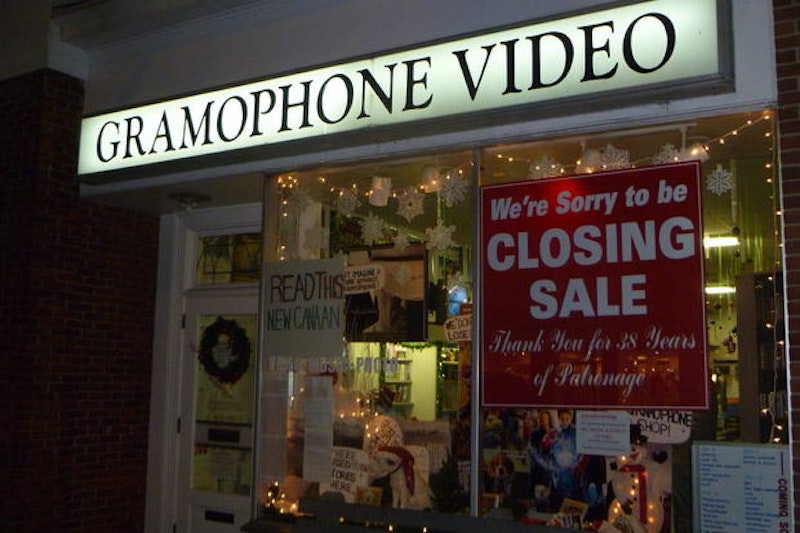 These mark the final days of Gramophone Video in New Canaan, Connecticut, and as far as owner Jack Trifero is concerned, the force that drove home the final, crushing blow was the local library: that nefarious and demonic purveyor of free information.
It’s not often that you find people fighting against the services and materials that a library might offer, as such a stance usually comes with the stigma of being steadfastly anti-intellectual, but the free distribution of DVDs at the New Canaan library has, apparently, driven Trifero out of business and rendered it impossible for him to pay his almost $36,000 in unpaid rent, though for anyone who is aware of current technology, it’s apparent that his anger is misplaced.

I’ve been entrenched as an employee within a large system of libraries for over a decade, and it’s always been true that libraries have a disproportionate amount of interest in distributing movies, beginning with our unreliable VHS tapes, to oft-scratched DVDs, and now, we’re only just approaching the delicate realm of Blu-Rays. Obviously, acquiring these types of materials has never been in the interest of driving small video shops out of business, and we’ve never paid attention to competing with Blockbuster, Netflix, or any other number of film distribution services. We are an animal of a different nature completely: the library possesses an inherent obligation to satisfy the informational desires of their public, determined by the fact that this public pays taxes which support this entity—and will invariably brandish torches and shout “I pay my taxes, so you have to do what I want!”

I’ve been on the receiving end of tax-themed diatribes a few dozen times while working at the circulation desk, so I’m certain this attitude of entitlement is unquenchable until said patron has a copy of Cheaper by the Dozen Two in their hands, right now. There is a marked difference in attitude between people who want to pay for something and those who believe that they’ve already paid for something.

Of course, Trifero is completely correct in his assertion that the library is mainly interested in its circulation statistics. It’s a fact that isn’t often discussed, but a library will bulk up whatever part of its collection that will generate the highest circulation statistics, as these are the key to improved funding, even when it means depriving people of materials that are more valuable on an intellectual level. If you can prove that your traffic is increasing, it’s another weapon in the fight for additional funding, which ultimately means better materials—but that point in the budget never seems to come, necessitating a constant fixation on the lowest common denominator in order to, one day, serve the highest. Certain local library directors have become notorious for tracking the current location of all of their DVDs and attacking libraries who might keep them on their hold shelf for an extra day and depriving them of a day of circulation stats, which is certainly not a courtesy which they bestow upon their books.

Books, in many ways, have become secondary in many modern libraries. We circulate nearly as many DVDs as we do books, and a significant portion of library patrons will only check out movies and never touch any other type of material. We are video store clerks with a loftier title and worse pay, and it’s a state of affairs that libraries aren’t thrilled with either. We’re trapped in an infinite loop that seems inescapable as long as libraries are paid for, in any small portion, by taxes. Just like Trifero, we are fighting to survive, but we’re willing to shift the nature of our business to do so.

Trifero cannot fixate all of this ire at libraries, though: illegal downloads and extremely cheap instant streaming on an increasing number of devices are the largest contributors to the transforming nature of information science, to which a video rental store is inexorably tied, whether they’re aware of this or not.

As I wandered into Gramophone Video for the first time this past weekend, most of the shelves were emptied out, and former rentals were now being sold for $4, with (used) new releases at $8. Sealed DVDs hovered around $30 each, a price that I’d not seen on a DVD in 10 years. A dozen untouched copies of Cyrus were displayed at the front of the store, which seemed to severely overestimate local demand (while libraries generally purchase only one or two copies of any given item, depending upon active demand). It was an understanding of the video rental business that hadn’t seemed to change in an inordinately long amount of time, but the new balance also seems impossible to strike without a radical shift in the nature of the business itself.

This is the conundrum facing any business that engages in the trade of information science, which is changing so rapidly that we often need to forget everything we know in order to simply keep pace.

While I’m absolutely a proponent of small shops in any town, it’s obvious that Trifero’s anger is misdirected and simply needed a tangible target. It’s tragic to see any community business collapse, but it’s a question of willingness to change, and not competition from a local library. We pay for convenience, but some of us are also learning to let go of our reliance upon convenience, and this is a positive trend for humanity to embrace. Sorry that your business got swept under, Mr. Trifero.