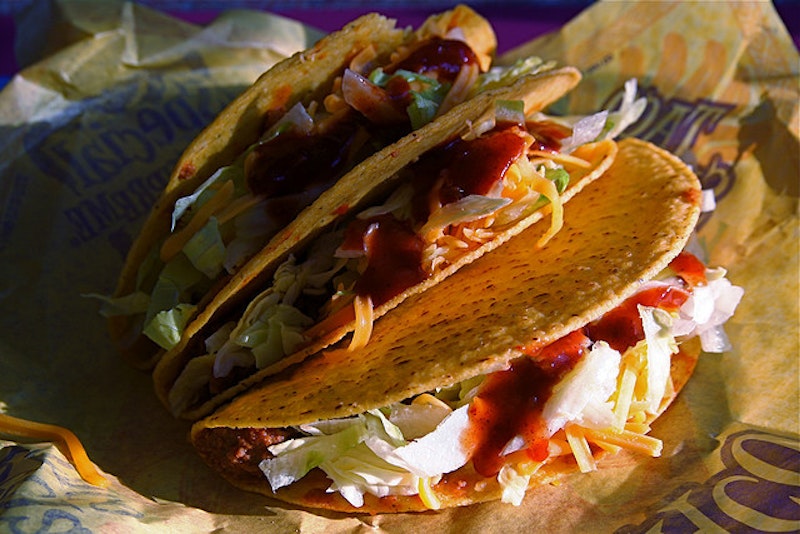 You may have heard the shocking news last week that the meat in Taco Bell’s taco―gasp!―may not be actual beef. Or at least not much of it. A law firm in Alabama has filed a class action suit on behalf of a California resident, who, according to the legal filing, believed that the taco meat filling was in fact beef and therefore suffered an injury in fact and lost money because she did not get what she paid for.

Really? She thought she was getting 100 percent Grade A ground beef in a fast food option that costs less than a buck? Okay, yes, Taco Bell should be following the USDA labeling rules, and if it’s true that their taco filling is only 35 percent beef, they should probably use one of those snazzy marketing euphemisms that are so popular these days. Anyone for a Double Layer Meat-Filling Taco, now with real Beefe® flavor? But the lawsuit misses the point about why people eat at Taco Bell. It’s not because it’s healthy and high quality; it’s because it’s fast, cheap and delicious. If the majority of their customers were at all shocked by this news, it was probably because they were surprised the tacos have any beef at all in them.

Though the chemical names that pop up in the other 65 percent of the ingredients are being slung around like Taco Bell has been trying to poison us all, the truth is that there is nothing particularly harmful in the mix. All of the ingredients are used in the processing of food. The “isolated oat product” and sodium phosphate may actually be relatively healthier for you than a taco stuffed with protein. We do need fiber for regularity and phosphates for bone strength, after all.

Nor is this kind of corner cutting out of the ordinary in the fast food industry. The filling for Jack in the Box’s tacos comes with a fair amount of soy, as well as Monosodium Glutamate [http://www.jackinthebox.com/pdf/Ingredients.pdf]. McDonald’s chicken nuggets top out at about 44 percent chicken [http://www.associatedcontent.com/article/195157/exposing_mcdonalds_chicken_nuggets.html], so more than half of each delicious tidbit is composed of fillings, preservatives and emulsifiers. Even when something is what it’s supposed to be—Burger King’s burgers seem to be the real deal, for example, though they are more expensive—it’s still not good for you. A single Whopper [http://www.burgerking.co.uk/nutrition?producttypeid=17&productid=1] has about half of the recommended daily fat and sodium intake and a third of the daily calories. And that’s before the fries and soda.

Fast food is junk food, but I’m not about to argue that people shouldn’t eat it. I’m a huge Taco Bell fan, as a matter of fact, and the truth is that it doesn’t really do any good to rail against fast food. People will eat it, no matter what’s in it or what they call it, because it’s cheap, filling and good. It would be better if it were an occasional treat rather than a daily affair, but that is a different issue from what is actually in the food. So long as it’s safe and people consume in moderation, what is the harm in a 35 percent beef taco?