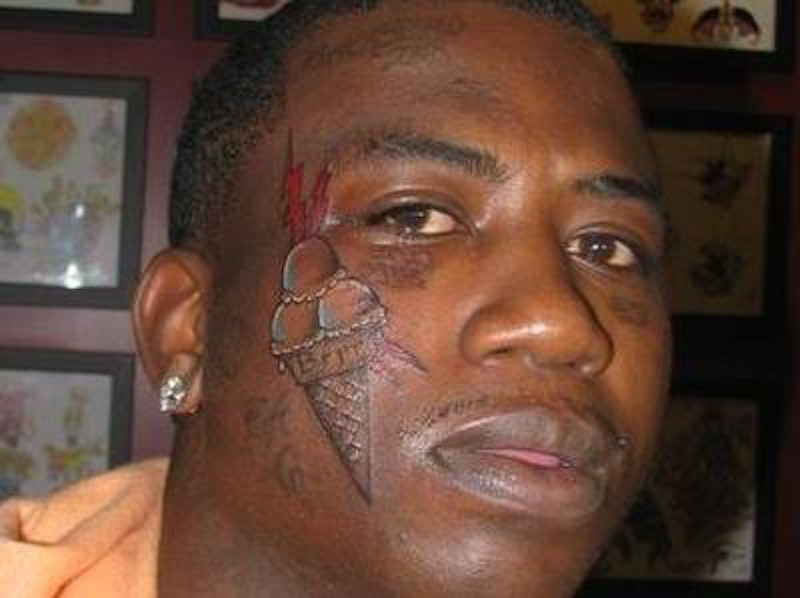 At some point in the recent past, a scar-tissued ice-cream cone—a scar-tissued, three-scoop ice-cream cone emblazoned with the legend “Brrr” and sporting a pair of lightning bolts, bunny ears-like—was tattooed to the right cheek of Atlanta rapper Gucci Mane.

Why, you ask? Does it really matter why? Conspiracy theories and psychiatric documentation can offer explanations, but whatever the reason, day in and day out, dude is rocking a crazypants face-tat 24/7, rain or shine, awards show red-carpet or Costco grocery aisle—unless his embarrassment reflex somehow kicks in and he starts rocking a Bart Simpson ski mask.
But don’t hold your breath for that.

Below are a few understandable reactions to this new adorable addition to Mane’s burgeoning face-tattoo menagerie.

I.
“What fucked-up frat did you pledge?”

II.
“What did you do to piss off the psycho-clown ice-cream truck driver from Twisted Metal III?”

III.
“What flavor, or flavors, is the ice cream up on your face?”

IV.
“Yeah, yeah, I saw you on the New York Magazine blog. Right, you’re that basket case rapper who can’t score a gold plaque, aren’t you? It’s a good thing you got the tattoo.”

V.
“I prefer tiramisu, and prefer it with much less passion, but I applaud your courage and lust for traditional American dessert fare.”

VI.
“I mean, it’s a statement. A bold statement—a statement that’s easily misinterpreted. It’s not as though anyone’s going to buy that you sold out, that you’re trying to help Pharrell sell shoes or whatever. But, like, well, I know you, but let’s say I didn’t know you, and you showed up unannounced at a casual, low-key get-together I was hosting at my condominium, dressed much as you are now—M.C. Hammer slacks, tank-top, ostentatious gold fronts—or even in something more subdued, more single-twentysomething-on-the-make, a ladykiller get-up, you know what I’m saying. But anyway, there you are, dressed to the nines and accompanied by an entourage, you show up on my doorstop and again, I don’t really know you, and we’re joking like old pals, fist-bumping and stuff, but look, I’d want to give you lots of ice cream. I would feel moved, no obligated, to bust out the Ben’n’Jerrys and Breyers’ and whatever else I had on hand, and inevitably would end up disrupting the conversational flow with awkward attempts to foist bowls of Rocky Road and Double Chocolate Chip Mint upon you, and maybe it’d be okay, we could laugh it off, you’d pass the ice cream on top your entourage? I don’t know.”

Homie: I’m going to a house party. You comin’?

Gucci: I don’t know, yo. The terms of my probation specify that I can’t smoke chronic or drink, so I gotta skip out on that; I’m not trying to get sent up again, I’ve got 17 mixtapes dropping next month. But maybe we can go somewhere else.

Gucci: Yo, are you for real?

Homie: That’s your name, dog, what people call you—your partners, your ladies, your agent, even your own damn mom.

Homie: Look, I have a mirror here. Check it out.

Gucci: Man, wipe your shit down! There’s coke residue all over this mirror.