The Wing Bowl Captures The Best and Worst of Philadelphia

"Wow, it's kind of intimidating to be in the presence of so many great athletes." 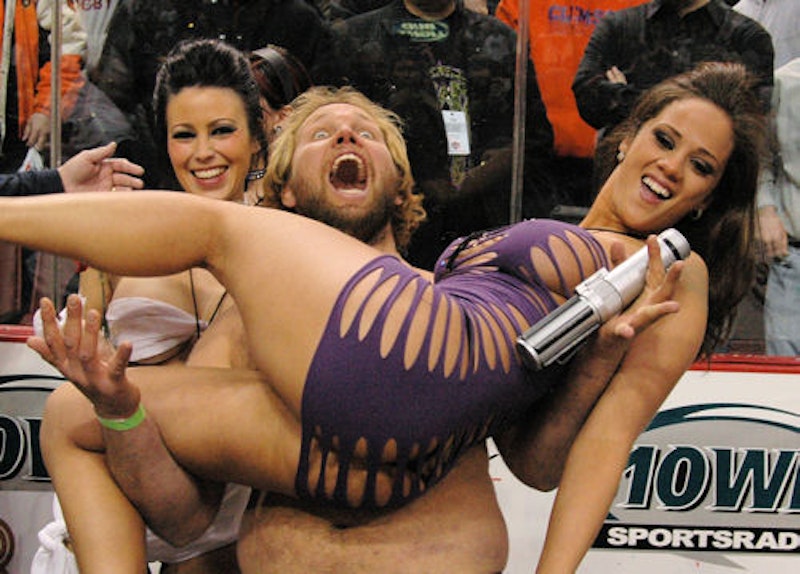 Those who paid attention in history class might identify Philadelphia as the birthplace of the most prosperous nation in history, where many foundational American documents were drafted, or as the onetime second largest city in the British Empire (after London, late 18th century). In the 21st century, it is mostly known as that city somewhere between DC and New York where you can tuck into an excellent steak sandwich with cheese, but not without encountering some of the most obnoxious sports fans on earth.

We Philadelphians are acutely aware of the image of our beloved city, as you’d be hard-pressed to watch national Eagles football coverage without a commentator reminding the audience that Philadelphia fans once booed Santa Claus and pelted the jolly elf with snowballs. But don’t ask a Philadelphian to care about this image. Most will beam with pride at the mention of the arraignment court established in the basement of the infamous “Vet” (home to the Eagles and Phillies from 1971 to 2003) or how when that same Santa Claus sought redemption at a 76ers basketball game in 2003, fans heckled him with even greater venom. Such a reputation comes with an intense emotional investment in the success and failure of Philly’s sports teams. Philadelphians understand that the rest of America finds joy in witnessing the demise of a Philly team. After all, how could such detestable fans deserve a championship? Knowing this target is on the city’s back, the week before the Super Bowl is a particularly agonizing one as the Philadelphia Eagles have only made the game twice since its inception in 1967. Yet for nearly 20 years, the resilient Philadelphia community has sought refuge at one place on the Friday before Super Bowl: The Wing Bowl.

“You heave you leave” is the motto around Philly at six a.m. on that Friday. Before an impotent February sun rises over this icy, salt-crusted city, tens of thousands of shivering Philadelphians pack the sold-out Wells Fargo Center (home to the 76ers and Flyers) as contestants of all shapes and sizes devour thousands of chicken wings drenched in hot sauce. Armed with vintage Eagles jerseys, light beer, and Pat’s cheesesteaks for breakfast, the Philadelphia faithful lucky enough to secure tickets cheer on not just the contestants, but also the women in attendance to engage in acts that are suitable for the radio station that hosts the event (flagship sports station 610 WIP) but not television. Many of these women are promoting local gentleman’s clubs that run special post-Wing Bowl lunch specials, and many had no intention of exposing themselves before the deluge of “SHOW YOUR TITS” chants proved too compelling.

The pomp and ceremony surrounding Wing Bowl begins months before when the WIP morning team holds open tryouts. Would-be Wing Bowlers propose an eating feat that the morning team either accepts or denies as worthy of an entry. While most fail in spectacular fashion to complete their propositions while Philadelphians tune in on their drive to work each morning, some, such as “The Polish Assassin” or “Joel the Cannon” secure their place. These two participants consumed 24 hard-boiled eggs in 3.5 minutes, and 1.5 lbs of Pumpkin pie in two minutes, respectively.

When that special Friday finally arrives, roughly 25 of these eaters have proven themselves worthy and begin the day with an entrance parade that can be likened to a professional wrestling match mixed with the Mummers Parade. Participants stroll into the arena boasting ornate costumes and floats, escorted by “Wingettes,” hand-picked by the morning team itself. There is no lack of creativity, according to chief of ceremony and radio personality Angelo Cataldi, but he feels that final product is a bit unpolished. “Great ideas, but not all that good at executing. When it comes down to it, these guys are just fat slobs. We’re not having a Mensa meeting in case you were wondering.” Most contestant entries are an ode to Philadelphia sports teams, adding to the pep rally spirit of a city always ready to erupt in chants. This year, the fan favorite float was “Mound (sic) Rushmore” that included the busts of Philadelphia’s four ace pitchers which comprise what is widely believed around the city to be the greatest pitching rotation of all time. Fans sitting in the first few rows of the Wells Fargo arena are encouraged to bring ponchos in order to avoid the onslaught of half empty beers and mustard-laden pretzels that are thrown at the contestants during the opening procession.

After the national anthem, which the morning team concludes is that last time they’ll have the collective attention of the riled-up crowd, the official rules are read, including, “All decisions are final no matter what they are,” and “No throwing wings at any of the judges.” The long awaited competition finally begins, comprised of two 14-minute periods and a final two-minute period. The past three champions have eaten over 200 wings.

The competition is peppered with self-loathing Philadelphia humor such as the “Donovan McPuke award” given to the first contestant who violates the hallmark “You heave you leave” rule and is disqualified. The award is a dedication to the moment when McNabb vomited in the waning moments of the 2005 Super Bowl, succumbing to the juggernaut Patriots. Contestants are regularly reminded that they are not allowed to dip the wings in water in order to more easily slurp them down as fans become increasingly drunk and unruly. Outside, the sun begins to rise.

This year’s winner was “Super Squib” who consumed 255 wings in the 30-minute period, edging out Wing Bowl legend “El Wingador” by a mere wing. But perhaps the most famous person in attendance was Takeru Kobayashi, who is considered the greatest competitive eater of all time. On the sidelines with the morning team, Kobayashi concluded, “I’ve never seen anything like this before…I think the craziest event I’ve ever been to… I’ve been involved in eating competitions all over the world and none of them ever demonstrated women and alcohol like this event.” Super Squib takes home $50,000 worth of prizes and the adulation of tens of thousands of Philadelphians who head to work for what is sure to be a very long Friday.

Championing such worthy causes of gluttony and casual six a.m. drunkenness, Wing Bowl undoubtedly gets heavily scrutinized by food banks and mothers of 18-year-old class-cutters alike. Yet nothing better captures the Philadelphia psyche and unrelenting passion of its citizens. Wing Bowl provides an opportunity to both cheer on and whine about Philadelphia’s teams. Whether to mourn the Eagles, or usher in a Phillies season and the more pleasant weather that accompanies it, Wing Bowl has evolved from a one-on-one wing eating grudge match to a Philadelphia treasure. Outsiders should not confuse the event with an excuse to drink at the crack of dawn, to indulge in greasy food, or to ogle the adult dancers in attendance. Rather, the prevailing ethos is one of camaraderie and optimism in Philadelphia, its sports teams, and the impending year of emotional highs and lows that characterize America’s first great city. My father offered me a nugget of consolatory wisdom in 1993 when I witnessed my first Philadelphia heartbreak of many to come—the legendary Joe Carter walk-off homer that won the Toronto Blue Jays the World Series. “There’s always next year in Philadelphia,” he told me. Wing Bowl is a celebration of that perpetual next year.