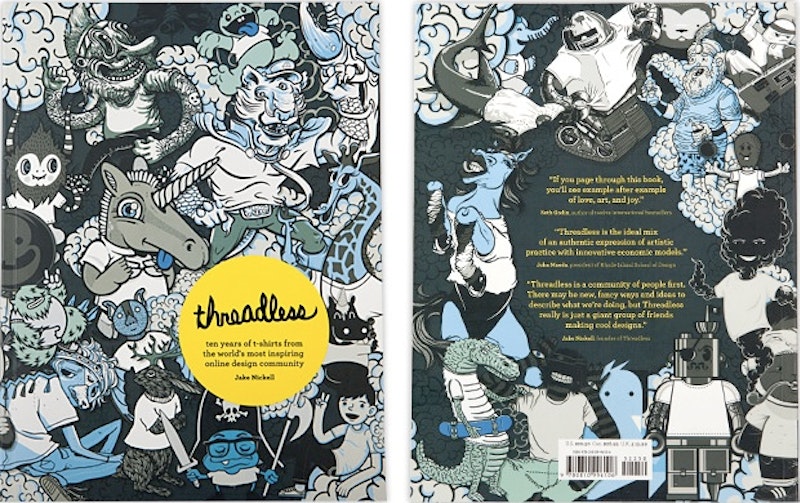 I’m not going to lie: I want to work at Threadless.

I don’t know what I’d do, or if they’d even want me, but I’m convinced that I couldn’t possibly be cool or creative enough to really fit in. I feel the same way about Pixar, and Legoland. And most relationships. Threadless just seems so freakin’ cool: a dream job for a creative force who takes art seriously enough to know that it should never lose its sense of enjoyment.

A little over a decade ago, Threadless had the brilliant idea to crowd source t-shirt design ideas, while simultaneously polling their online audience about which shirts they’d actually buy, effectively removing a majority of the conjecture associated with creating a new product. Enough momentum was established that their shirt sales were essentially guaranteed after a few years of struggling through the mechanics of starting a business. Profit followed, and innumerable other businesses popped up following this same model, to varying degrees of success. Threadless captured something rare and explosive.

Threadless, by Threadless founder Jake Nickell and published by Abrams Books, collects the cumulative wisdom of running a ridiculously successful small business, accompanied by a visual timeline of the evolution of t-shirt design, interviews with designers, and a whole lot of pretty pictures. Threadless functions effectively as a one-stop reference for the ways that design has shifted in the past 10 years, for both good and gross. It’s just as much a book about good business as it is about art, which is a pretty interesting combination itself. Harvard teaches Threadless as a business class. How’s that for serious?

It’s not a compendium of every Threadless design ever released. Instead, it functions within themes and years. It relegates most of the terrible “food with faces” and “talking objects” eras to a few pages, and keeps their TypeTees to a minimum. I’ve always been a little repulsed by shirts that make “clever” verbal statements: rip-offs of The Tick like “Don’t destroy the planet, it’s where I keep all my stuff.” or smarmy things like “If you can read this, make me a sandwich.” Thankfully, this is a very minimal part of Threadless’ business and a small part of the book, even though it’s an essential hurdle to be aware of.

We get to see Threadless evolve past their early shirts which boldly depicted unicorns having sex (which really don’t even compare to the violent “Gimme a BJ, bitch!” shirts that dominate Spencer Gifts today), and into a period of time when obtuse, intentionally ugly design (“Let Our Veins Do The Talking”) was flailing impotently against all smart design sensibilities, but there’s also a lot of really great art to punctuate these movements. Standards moved from four colors to full color and became more inclusive of hand-drawn designs over carefully vectored images. Design, the great oroborous, always circles back around to where it started. While Threadless doesn’t say as much, it’s made very apparent.

Today, Threadless designs feel more like anything is possible, without technical limitations preventing innovation—but more than anything else, it’s really, really inspiring. From awful designs that happen to be very popular to truly beautiful designs, Threadless serves as the perfect design barometer in whatever incarnation it takes, from website to book, and even restores a little hope that there’s room for genuinely good design in the perpetually mediocre mainstream. It gives you something to angrily fight against, or something to joyfully contribute to, but it rarely falls into a place of indifference.