The long and glorious tradition of pumpkin carving. 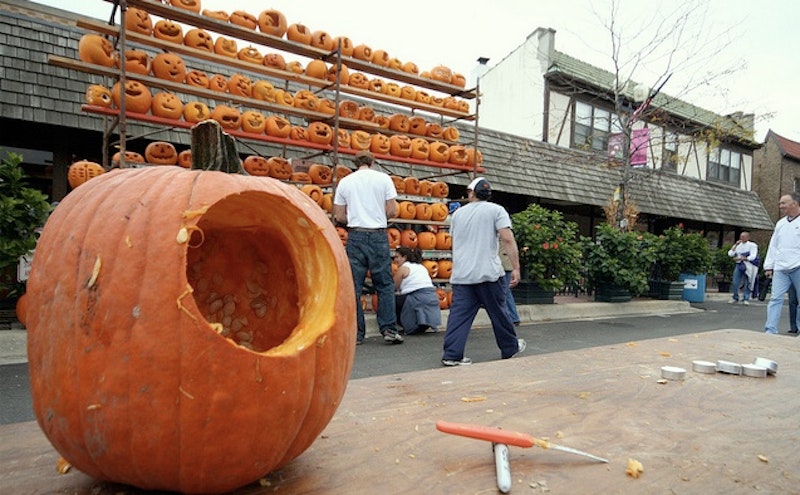 That the Stepping Stone School lot was a glass half-full at 2:45 p.m. offered no comfort; I was egregiously early. Or was I? Alecia’s understanding was that the event—“Carve A Pumpkin With Dad Day”—began at 3 p.m., yet the flier on the glass double doors dissented: 3:30 p.m. Upon entering Nodin’s classroom at 3:25 p.m.—lumpy, dirty Wal-Mart pumpkin tucked under one arm, cut-rate carving tools clamped under the other—I joined three or four other dads, who were putting finishing touches on their jack-o‘-lanterns.

Costumed and pajama’d four- and five-year olds clustered around them on tip-toe, rapt and adorable. Everywhere there were heaps of pungent orange pumpkin viscera. Nodin broke away from one of these groups when I arrived, but my presence didn’t thrill him; it was as though I’d intruded on a particularly involving, exclusive dream of his. Sitting at one of several small group-project tables repurposed for the afternoon as a gourd autopsy slab, surrounded by his curious classmates, we couldn’t connect. In his pre-K domain, with its particular mores, hierarchies, and logic, I was an intruder. My presence confused him. In turn, I struggled to simultaneously involve him in the pumpkin-carving process, to interact with his peers, and to figure out how, exactly, one gouges a pumpkin into a grinning demonic horror.

Had I carved a pumpkin before? Certainly I’d been present when other people carved pumpkins. Certainly a string of pumpkin-related memories paraded by, on command: the gargantuan pumpkin we grew in the backyard during kindergarten at the Milford Mill Child Development Center, my hands smeared with slimy pumpkin guts, the distinctive aromas of hard oval seeds or pumpkin bread baking in my mother’s oven. A few weeks earlier, we’d carved them as a family, on the back patio. Until Alecia unwrapped the carving set and I began to scoop out handfuls of orange goop, Nodin’s excitement was palpable—then, all of a sudden, Alecia and I were on our own.

At Stepping Stone, Nodin leaned against me in a daze, as if his world were in mid-collapse, a twist on the “Friendship George meets Relationship George” problem. His mien, posture, and listlessness signaled this wasn’t what he wanted. He was hungry. He was tired. Were we almost done? He wanted to go home; he didn’t want to talk to his friends, who wanted to help me. A clutch of tykes leaned in dangerously close as I gingerly carved a hole in the top of the pumpkin with a humongous kitchen knife I borrowed from another dad, deathly afraid of jerking the blade up or down with too much force and sending someone to a nearby ER. A chatty pint-sized Snow White offered assistance with excavation and suggested that the smile I was carving needed more teeth. A mischievous, un-costumed boy worked in unwanted concert with Nodin in an odd, half-hearted effort to doodle faces for me to carve, faces that were ultimately the size of a baseball and ruefully surreal. A laughing, mop-haired Puck placed his face on my shoulder and harangued me nonsensically for several trippy moments, and the litany of abuses and antagonisms Nodin had attributed to the boy in weeks previous finally made sense, leaping into belated focus.

Caught in this awkwardness and lack of parental ease, I was suddenly my own stiff, kindly father and Nodin was me as a standoffish young boy, the cycle perpetuated. There was the sense, additionally, of my short-term transformation into someone or something representational, a stand-in for fathers unable or unwilling to take time off of work to carve pumpkins with their kids, accompanied by an irony: kids whose fathers weren’t there were more psyched to watch me fumble my way through pumpkin-carving than my own son was. He came to life, out of his trance, when it was time to clean the outside of the pumpkin, to gather damp paper towel to wipe away the pulpy guck. We didn’t get it all, of course, or the crusts of dirt, and streaks of innards remained within the skull of the most generically carved pumpkin ever. Our pumpkin, conceived on a single unaligned day in a multitude of happier ones.