It Really Is the City of Angels

Like many before him, Forest Casey moved to L.A. to find excitement. He ended up holding the Spit Bucket. 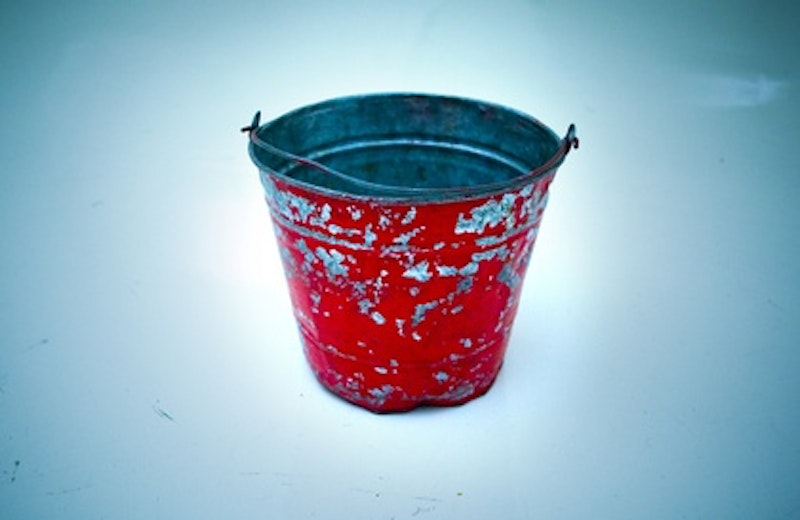 The Bucket itself. Photo by the author.

Sometimes, I worry that nothing else interesting will happen to me. I'm not going back to Mexico anytime soon. My life isn't going to be in any real danger in the foreseeable future. I'm frightened of the day when my new stories will be about products for which I waited in line; the day when my new adventures are merely adventures in consumerism.

This is largely the reason I moved to Los Angeles—to escape mediocrity. L.A. might be fake, it might be expensive and superficial, but it is rarely boring. There's always a fire to photograph or an undercover cop shooting to keep me from getting to work on time. Excitement! Adventure!

At least, so I thought. For almost two full weeks, my life has occurred without incident. I would wake up, go to work, come home, have a beer and go to sleep—mostly in that order. Mediocrity, it seemed, chased me across the country and found me in L.A.

And then I held the spit bucket on a commercial for a fast food restaurant.

Let me back up a bit. I came to L.A. to work in commercials. Not as an actor or a director or even as a producer—I wanted to create the concepts behind the commercials, to come up with the ideas. I still want to, actually.

As you can imagine, this is a tough business to break into, so I sought employment on the other side of the industry—with a commercial production company. My company organizes the crew and the casting, rents the locations and pitches the directors to the ad agency.

I started working in production six months ago. Since then, most of my work has been office work; I still hadn't gotten my hands dirty with any actual work work. You know, all you would imagine commercial production to be—staying up past your bedtime to get those last shots, feeling like you're part of a real team. This was the kind of excitement I'd been lacking.

On the morning of the fast food commercial shoot, my mom woke up early to drive me to the set. I'd been a bit nervous about the shoot—my first time as a production assistant, getting above the desk and out of the office at last. My mom was in town with my brother to look at colleges and needed the car for the day, so there we were, driving into the Valley as if it were my first day of school. Mom even offered to make me a bag lunch. I politely declined.

The set was crowded early, with grips and gaffers and production assistants all moving to build the shot. Of course, this being a city of professionals, none of them looked excited. In fact, they all looked old. As if all of the Runaway Dads in America wound up in Hollywood after deserting their families, destined to carry heavy objects and wear surf-related clothing. For the rest of the day, they sat around on apple crates, defiantly checking their iPhones. At one point, they used gaffer's tape to make paper footballs and spent about an hour flicking them around the set.

That's not to say the commercial was worth more of their attention. I really shouldn't mention the name of the fast food restaurant, but I can say that one of their sandwiches is making a triumphant return (I hope that I didn't spoil the surprise for anyone). To celebrate, the ad agency cast the typical spectrum of actors under 30 and had them dance with the sandwich, look longingly into its eyes and eat the shit out of it for about eight hours.

Now, when this commercial finally interrupts your favorite program, you'll see our cast of seven enjoy about one sandwich each. But on the day of shooting, the actors needed to consume about 25 sandwiches for the sake of coverage. Close-ups, wide shots, two-shots—every take meant a new sandwich in the hands of the actor.

Obviously, if the agency wanted the actors to eat all of these sandwiches, they would have just cast Joey Chestnut. So, every time the director yelled cut, the actors would spit out the remains of their undigested sandwich into a red bucket. And it was my job to hold the bucket.

As you would imagine, this is an overwhelmingly disgusting process. The sandwich in question is smothered in onions and barbecue sauce, creating a red paste, threaded by strands of chewed meat. The smell was unexpectedly clinical, as if I could smell the preservatives and the Red Dye # 6.

If you ever find yourself holding a spit bucket, expect to do some deep thinking. Expect first to recall the strength of your college degree or, if you don't have one, maybe just a challenging crossword puzzle you completed. Expect to be confused—do your qualifications make it more or less depressing that you're holding a spit bucket?

Expect to start a list of all the degrading episodes in your life—every shitty job, every moment of embarrassment. Expect to be surprised that the spit bucket episode, as bad as it might seem, inspires more boredom than disgust after a few hours. They say "Cut," you thrust the bucket upwards, the actors spit, you avoid looking at it and cover the top with a paper towel, creating layer after layer of a tedious lasagna.

Expect to reflect on the preposterous nature of your job. You'll probably be very well paid (about $30 an hour). Of course you will feel that you deserve this but, likely, you will still find it strange that such a job exists in the first place.

I wouldn't advise asking, "Why was I chosen to hold the bucket?" Generally, that question doesn't have any satisfying answers. It's more like: Because you were there and looked reasonably cheerful, because you were new, because they felt you wouldn't say no.

On a happier note, expect to grow an unnatural bond with all of the actors. On the sets I've visited, actors usually spend their time sleeping or trying to flirt with the girls in wardrobe. You, providing them an extraordinary service with your bucket, are a new experience entirely. You'll make friends quickly. You'll also gain respect from the crew members, as everyone respects the person with the lowest, crummiest job on set. But don't expect them to actually be friendly with you.

If your mom happens to drive you to the shoot, expect that you will be a bit cross with her when she picks you up. In truth, holding a spit bucket for a few hours isn't a bad way to make $225. But to give the story more weight, you'll want to seem upset and offended. Try not to get too grouchy.

And, finally, expect to spend much of the day putting together an article in between takes. Trust me, you'll realize that you're doing something interesting, an adventure finally worth writing about.