From Lamé to Lame

This is how a scenester evolves into a Jo-Ann Fabrics customer. 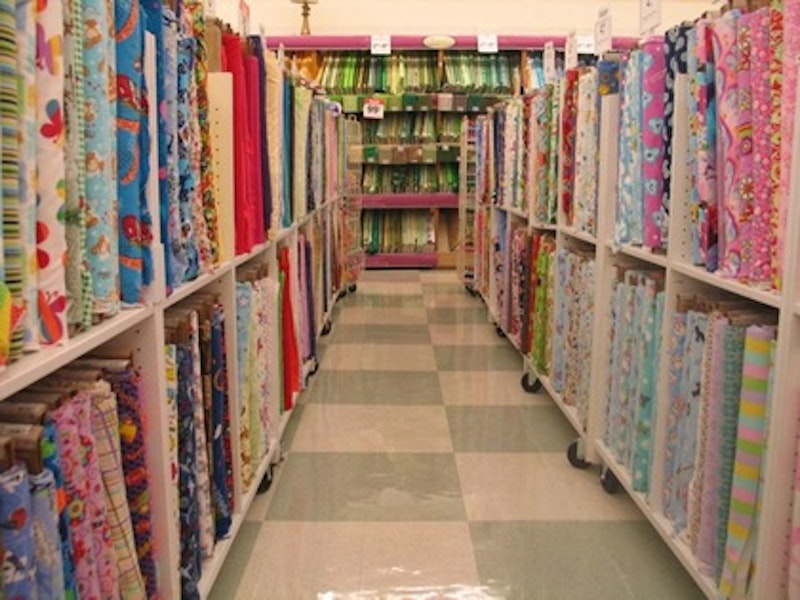 It’s Friday evening and my boyfriend and I are out being domestical, popping around looking for cleaning supplies and cool things to put into my new apartment. The Boy tells me that he wants to make some pillows for my couch, so we opt for Jo-Ann Fabrics. When we get there, I immediately notice three things: 1) it smells like potpourri, or as my grandmother calls it…“poppa-touri”; 2) there are no black people; and 3) the average customer age is 82.

Now this is a Friday night!

On the drive back home the following conversation develops: “What chu want to do tonight, boo? You wanna make dinner and watch a couple episodes of Design Star?” “OMFG YES!” I squeal, completely stoked to cook dinner, watch Design Star and spend time with my boy. Just one second. How did I go from spending my Friday nights as the Queen of the Dance Floor to fuckin’ shopping for fabric with old white ladies?

Let me tell you, I used to be a serious club kid. Do you hear me? S.E.R.I.O.U.S. I loved nothing more than going out for hours on end. Fo’ shizzle. All college students know that what real adults call “the weekend” occurs, in fact, every day. My weekends used to look something like this:

But despite this extensive partyage, I never did anything super wild and crazy: not a single drug, practically zero one night stands and maybe like four alcoholic drinks total, over a five-year period. My friends be like: (smack of the lips) “Girl, you borin’ as hale!” And then I go: “Whatever, tricks! It don’t matter!” ‘Cause you better believe I was always one of the fiercest bitches up in the club, okay!

My obsession with going out started when I got to college. See what had happened was, the summer after my freshman year of undergrad, I ingeniously convinced my folks to let me “take some summer school classes at Berkeley,” A.K.A. rambustificate in San Francisco. This was probably my wildest moment ever. Within seconds of landing in California, a bosomy 3000 miles away from mommy, I fuckin’ bleached my hair (read: black people should never have blonde hair), started wearing crazy M.I.A. colors and was out all hours of the night. Since I wasn’t 21, I couldn’t get into the regular gay clubs on the weekend so I had to go out on really obscure nights like Monday when this one place was 18 and over.

I haven’t been that wild since. And now, I want nothing more than to have a great boyfriend and sit at home and build IKEA furniture or watch Design Star with him. When I compare Today Madison to Berkeley Madison, I realize that I’ve gotten more boring by the second. But whatever, I still wear crazy outfits and kooky glasses, and proudly sport a homohawk (the faux mohawk gay boys wear in order to be gay). The only difference is that now, you can’t get me to go out, especially not to a gay club. What happened to me! Is this what all us scenesters have to look forward to with increasing age?

Naah. A real scenester stays a scenester. I think you just get sick of the superficiality of the typical nightlife. Because if you really think about it, going to clubs, gay or straight, is a little bit like going to your high school prom every weekend: everybody drinks like it’s the last drink they’ll ever have for the rest of their lives; everybody is out looking for a piece of ass or a little bit of titty; and people just do really, really stupid stuff. Especially white people. White people do some crazy shit when they drunk.

Or maybe you grow out of a given scene as you get older. At first, my only scene was the gay scene. I wouldn’t set foot into a place that wasn’t gay. Then I got sick of that and transitioned to hipster dance parties because I relished the irony and androgyny of the hipster scene. Nothing better than a pair of black thick-framed glasses with no lenses, gold lamé leggings and a t-shirt cut off at the waist.

What people don’t understand is that, above alcohol, hook-ups and getting totally fuckin’ coked out, a good nightlife is about creating a spectacle. It’s about making a fashion-forward character out of yourself and having fun. Yeah. It’s that one time of the week when you can get dressed, I mean like get really crewt, and own the dance floor.

I think I realized that there are other reasons to be young than pAArtying. Like having, um, goals. Maybe it’s a generational thing. I’m currently earning a Ph.D. from an Ivy League university and am waiting to become a superstar any day now. All of my other friends are either in graduate school or seriously working on their career. Two of my best friends are in serious relationships with people who are equally goal-oriented.

I guess that’s why people have mid-life crises, huh? At the end of the day, you’ll get a great job, a hot wife/husband/partner, two kids, pets, a mortgage, etc. And then you wake up in the middle of the night, swearing, surrounded on all sides by Leave It to Beaver and you’re just like “WTF! I used to be so fierce! What happened!”?

I’m already wondering, “What happened?” but I’m not really sweating it. My days of LastNightsParty.Com and going out Sex and the City-style aren’t over. You don’t get older, you get better. And as long as you’re wearing a great outfit, you’ll still be totally fierce.