The Robot Worker in Catonsville 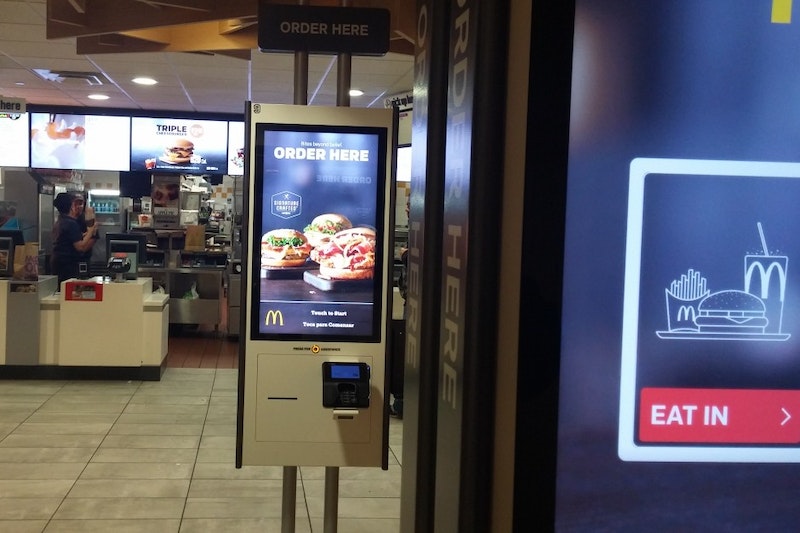 It's only natural that, on occasion, I get out the door a little later than expected going to school. Since classes get out at lunchtime, breakfast is important. But of course, if push comes to shove, I can easily pick up breakfast in Catonsville. But the last time I went to the Catonsville McDonald's, I discovered a major change in the store: the addition of automated kiosks.

The kiosk was fairly straightforward, input an order and bring it to the front. I was made immediately uncomfortable, wondering if the far thinner human presence at the counter was a sign of loss of human labor or perhaps my own flawed perception filling in the blanks. Either way, I could certainly feel a shift, a step closer to Carl's Jr.'s CEO Andy Puzder's vision of a completely automated fast food restaurant. In all fairness, I still had to interact to human workers at the counter. I was never able to shake the feeling that this was an omen, that someday those workers that got shifted to cleaning and waiting tables would be replaced by other bots.

This automation is also an attempt to bring McDonald's closer to more of a fast-casual experience. Upon ordering, the customer takes a number like they would in a place like Noodles & Company or Fuddrucker's. An employee brings the food out, making it feel distinctly odd. The transition is incomplete, since the food still retains the same level of quality that it had for as long as I've lived. After all, the reason one opts for a fast-casual as opposed to plain old fast food is because of the bump in quality without completely sacrificing convenience.

All of this indicates that McDonald's serves as an artifact of an earlier era. The fast food giant was created in a context of a changing postwar infrastructure, it was the birth of suburbia and the dominance of the automobile that created the conditions for McDonald's success. Mcdonald's is attempting to adapt to the current cultural context, and automation has the additional benefit of long-term cost cutting. But what kind of cultural context is being created, and is it something we should necessarily want?