How Jeremiah Tower ruled the culinary world until his sudden flameout. 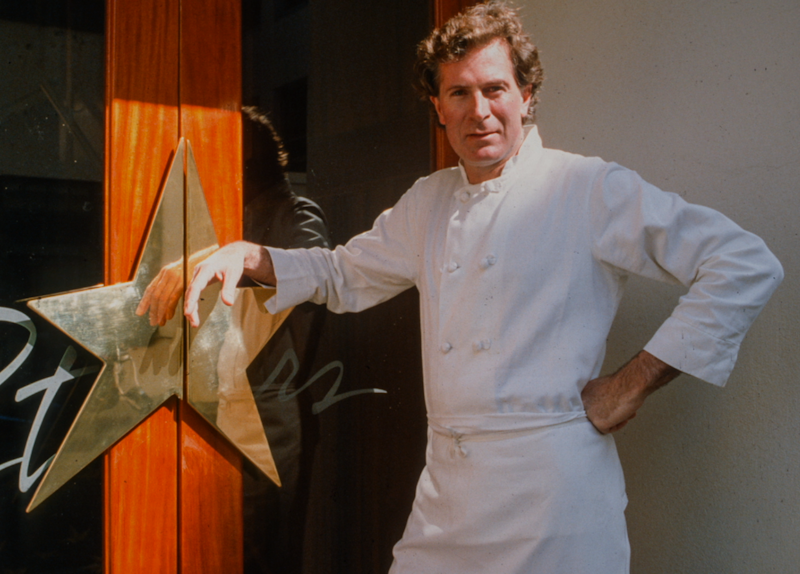 Among the legendary restaurants in American history, Berkeley, California's Chez Panisse is one of the few to where the introduction of an entirely new culinary genre could be directly traced. It was serendipity, as Alice Waters and her husband opened the place in 1971 in an arts and crafts house on Shattuck Ave. mainly as a hangout for her counterculture friends. She'd traveled in France and was inspired, not by Michelin-starred eateries of Paris and Lyon, but by the small restaurants in the country that cooked whatever was fresh every day.

Waters learned to cook, while acquiring no notable technique, through on-the-job self-training. One day, a young and handsome recent Harvard graduate with an architecture degree applied for a cook’s position. Although he'd never held any job, this gastronomic prodigy named Jeremiah Tower was soon to become the head chef and equal partner in the business. It was the first chapter of a meteoric career that would catapult him to the apex of the culinary world in just a few years.

Successful European chefs like Wolfgang Puck and Daniel Boulud all had long, arduous apprenticeships in kitchens starting in their early teens. They never even thought about having their own place until decades later, which is one of the angles that makes Tower’s story so paradigm-bending. Another is his eventual, precipitous fall from iconic celebrity-chef status, but that wasn't to happen for years. Just as remarkable is the fact that nobody outside of the cuisine subculture has ever heard of Tower. He should have a restaurant empire along the lines of Puck’s by now, but instead he’s destined to be known as the great master chef manqué.

Tower only answered the Chez Panisse want ad because he was broke. Raised in the most luxurious of circumstances, his allowance had dried up after the recent death of his grandfather. As a child of 10 or 12, when away from his boarding school in England, young Jeremiah would travel on luxury liners with his neglectful parents, who’d leave the budding epicure alone with carte blanche approval for any meal he wished to order from lavish menus. As he recounts in the documentary about his life, The Last Magnificent, food became his closest companion in a private fantasy world. Collecting menus became his passion, and he read ancient cookbooks like others would novels.

By the time he fired up his first burner at Chez Panisse, Tower had accumulated a wealth of culinary knowledge. To Waters’ simple and unadorned fare, he added an element of sophistication and theatricality. After featuring a succession of menus inspired by various regions of France, Tower decided one day to use available local ingredients to create what he called the Regional California Dinner, accompanied by California wines.

The grandfather of American cooking, James Beard, caught wind of Tower’s innovation, and California Cuisine was born, putting in motion a movement in which chefs substituted high-quality, fresh local products for ingredients sourced from afar. Veering from the orthodoxies of French cuisine, they felt liberated to begin cooking with eclectic techniques and flavorings borrowed from Asian and Hispanic food culture. Chefs seeing Tower grilling a duck breast and topping it with mango chili salsa made them realize they'd henceforth be limited only by their imaginations.

People began flying in on Lear jets to dine at Chez Panisse with Tower in the kitchen, but the partnership became strained in 1978. Tower left and soon opened the Santa Fe Bar and Grill in Berkeley and then, in 1984, became head chef and co-owner of the San Francisco restaurant that was to cement his culinary legend status—Stars. In large part due to Tower's influence, people were now starting to pay attention to chefs’ names, so he built an open kitchen and made the cooks the stars of the show instead of the anonymous laborers they'd always been.

Every evening at Stars resembled a theatrical production, with Tower often overseeing the proceedings in his immaculate chef’s whites from the edge of the dining room with a flute of champagne dangled in his hand. His technique was pure, inspired and free of gimmicks. It takes a rare talent to make a black bean cake famous. When the chef felt playful, he'd put a hotdog on the menu and suggest Champagne to wash it down. The reviews were glowing, describing Tower's magnificent looks, charm, and sophistication. All the stars came too—Rudolph Nureyev, Robert Redford, Luciano Pavarotti, Mikhail Gorbachev, and many others. Tower, the first celebrity chef, would chat with them as their equal in his posh accent. Everyone was welcome, however. It was that kind of place.

The “grand cafe” Stars represented the spectacular rebirth of American regional cooking—the time when American chefs no longer had to bow to the superiority of their French counterparts. In celebration, every evening Tower hosted the biggest party in a town packed with sybarites. People close to him think Stars became the embodiment of a dream he’d formed in childhood to assuage the pain of his tramatic upbringing that lingered  into his adulthood. The pursuit of perfection was the palliative the chef required.

Tower was, at his core, a rebel. That spirit, combined with an ethereal talent, produced the unique energy of Stars that enhanced the already spectacular cuisine. Alas, it was destined to become a supernova, exploding under the weight of lawsuits, a major earthquake, and Tower’s own enigmatic, mercurial nature. When the restaurant finally closed in 1999, the onetime toast of the town fled San Francisco and faded away into obscurity abroad. His closest friends realized they didn't really know much about the inscrutable culinary genius.

In a downbeat coda, Tower inexplicably became head chef at Tavern on the Green in New York City’s Central Park in 2014. It's the kind of high-volume tourist trap where people take their grandmother from Connecticut for her birthday meal. It was just a five-month stint for the 71-year-old faded legend, who the critics were laying in wait for. The New York Times’ restaurant critic, Pete Wells, wrote, “The fun stops when the food arrives.” Nobody had ever said that about Tower's cooking before.

Tower, who now bears a remarkable resemblance to author John Le Carré, restores old houses in Mexico, content to spend his dotage in solitude. Jeremiah Tower started off like Orson Welles, who made Citizen Kane when he was 25, and Marlon Brando, who became an acting sensation at 26 in Streetcar Named Desire on Broadway, but has ended up like Greta Garbo, just wanting to be alone. His influence, while subtle by now, won't fade away.