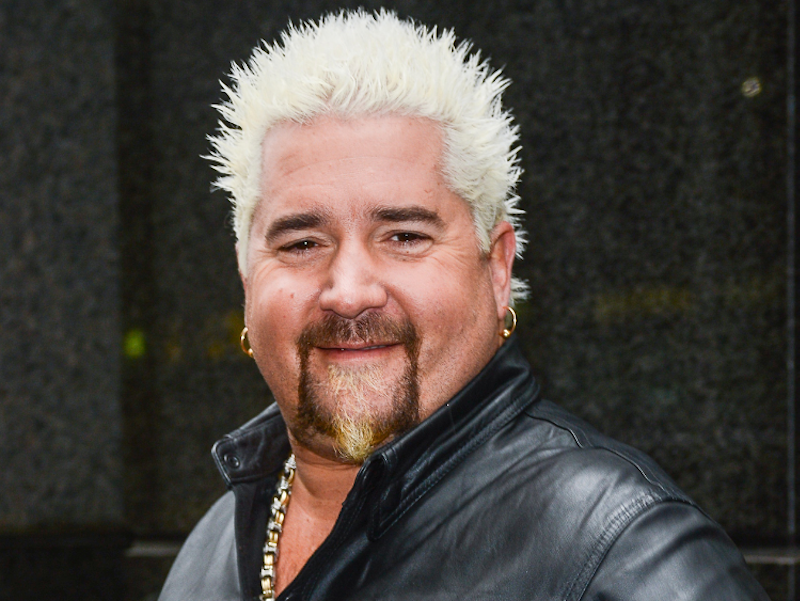 The “Flavortown” sign has been taken down and the front door padlocked. Tourists and fans of ironic dining hoping to experience the fruits of celebrity chef/TV star guy Guy Fieri’s “no boundaries” imagination at his Times Square restaurant will now have to settle for the Hard Rock Cafe or Bubba Gump Shrimp Co. when they're in the area, as The New York Times’ zero-star Guy's American Kitchen & Bar, which opened in 2012, is no longer selling its $16 sashimi tacos, $18 Brown Derby Cobb, or $23 Cajun Chicken Alfredo.

The self-described Mayor of Flavortown, who appears to channel Sammy Hagar, hasn't specified why the eatery is closing, meaning the place was losing money. The flamboyant or, alternatively, mind-bendingly obnoxious (depending on your point of view) restaurateur claims to have opened over 63 restaurants around the world, but doesn't talk about the ones he's closed. He now owns less than 10. When Fieri opened his 500-seat gustatory Terror Dome, Pete Wells of the Times gave it a famously withering review that stated that the menu was “an unreliable predictor of what actually came to the table.” That's when one of the menu items was “Guy’s Pat LaFrieda custom blend, all natural Creekstone Farm Black Angus beef patty LTOP (lettuce, tomato, onion, and pickle), SMC (super-melty-cheese) and a slathering of Donkey Sauce on a garlic-buttered brioche.”

If Fieri's temple to the weird culinary combo of pretension and cheesiness is appealing, you can still get it in, for example, Guy Fieri's Vegas Kitchen and Bar, and sample such gustatory wonders as Sashimi Won-Tacos drizzled with "wow-sabi" cream, the Guy-talian Fondue Dippers, or The Mayor of Flavortown Burger with its “meat blanket of seasoned pastrami.”

Fieri’s menu items apparently come to him in fever dreams after he’s dosed up on whatever stimulant he's addicted to and binge-watched, without sleeping for several days, dozens of videos on the cuisines of foreign nations that share no culinary commonalities whatsoever. What else other than the combination of drugs and sleep deprivation could prompt the chef to come up with bizarre creations like his Jackass Roll, a sushi roll with a filling of pulled pork, french fries, and Asian-flavored chili mayo, or the wings that are “trimmed into lollipops" and finished with “off-da-hook wing sauces.” Guy and his “krew” never let up on the gas of their wow-factor machine.

The bleach-blond, flame-shirt-wearing Fieri achieved his unlikely status in the upper strata of popular culinary world much the way Donald Trump made his way into the White House. Trump did it after gaining name recognition during his years as the host of a reality show, while the inventor of Brutha's Badass Caesar Salad (aka Caesar salad) rose to fame through his constant appearances on the shows he's hosted on Food Network, one of which involves chefs who are given two minutes to go through the aisles of a grocery store collecting items on a shopping list worth $200 each. Chefs who get every item win the $20,000 grand prize.

There was a time when Food Network focused on fairly serious home cooks, and even kitchen pros. It featured talented, accomplished chefs like Mario Batali, Jacques Pépin, Sara Moulton, and Ming Tsai. Around the time Fieri won the Next Food Network Star competition in 2006, the network decided to abandon any pretense of integrity and shift gears in search of wider appeal. Perhaps impressed with the success of A&E's Dog The Bounty Hunter, the TV execs decided Fieri had The Right Stuff to be become the network's new star. At one time, in addition to hosting the show he's mainly known for, Diners, Drive-Ins and Dives (or “Triple D!” as the chef likes to call it in his usual shout), Fieri appeared on six other Food Network programs. He didn't actually cook on any of those shows, including Triple D, which may have something to do with the fact that his culinary skills are limited in the way that Trump's verbal skills are.

Fieri’s tried to bill himself as a guy who doesn't chase frivolous food trends because he's just a regular Italian guy cooking “real food for real people,” but he's the inventor of barbeque/Japanese fusion cuisine. What kind of “real” people have a hankering for fries in a maki roll? The aptly-named Jackass Roll is what results when someone with a ham-handed touch thinks he can pull off a trick. There's just no reason for it to exist.

Times Square has had to survive the demise of its raunchy movie houses and peep shows, and now it must deal with the loss of Flavortown.