The Dying Delis of Los Angeles

With cheap alternatives like Subway offering $5 sandwiches, delis are in a pickle. 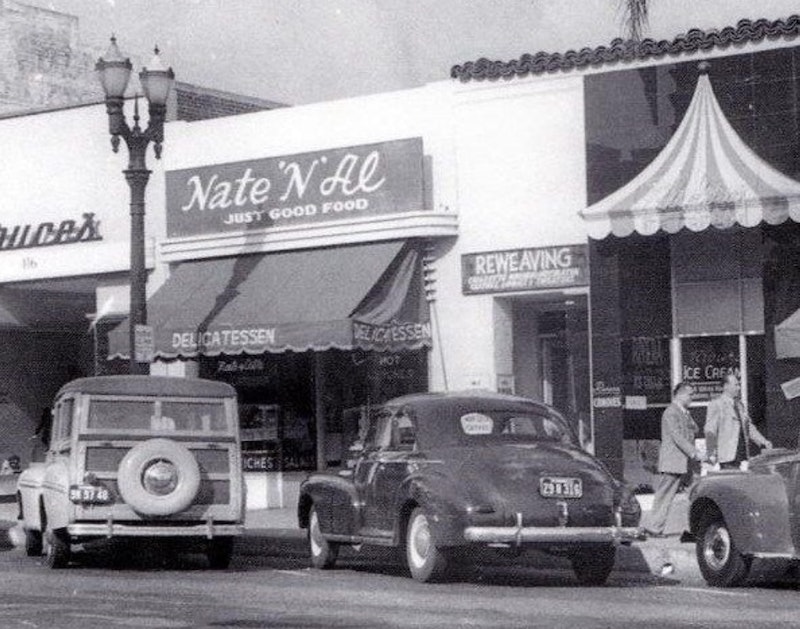 Delis are dying throughout Los Angeles. In the past 10 years, the city has lost Junior’s in Westwood, Greenblatt’s in West Hollywood, Weiler’s in Northridge, Jerry’s in Studio City, Izzy’s in Santa Monica, Solley’s in Van Nuys, Billy’s in Glendale, Steve’s in Pacific Palisades, Victor’s in Hollywood and Label’s Table in the Pico-Robertson area. Nate ‘n Al’s in Beverly Hills was set to close in 2020 after 75 years in business until it was rescued at the last moment by music executive Irving Azoff. Canter’s Deli on Fairfax closed their dining room but stayed in business through takeout orders.

There are several reasons for the demise of Jewish delis. They’re expensive to run. The main ingredient is beef and with rising food costs, customers now fork over $25 for a pastrami or corned beef sandwich. With cheap alternatives like Subway offering $5 sandwiches, delis are in a pickle.There’s the factor of succession. Delis are often a family business and the sons and daughters of modern deli owners are less likely to follow in their parents’ footsteps. Jake Dell, a third generation deli man from Katz’s Deli in New York said, “After a while, you start to see delis disappear because there’s no one left to take over.”

Changing food trends have victimized delis. To a vegan or vegetarian, a fatty pastrami sandwich is a nightmare. The only vegetables you’ll find in a traditional deli are pickles and fried potatoes. Some have altered menus to conform to health-conscious palates. Canter’s offers paninis, Nate ‘n Al’s has salad options and Wexler’s offers gluten-free matzo balls. Mort and Betty’s in downtown LA is a plant-based deli featuring “corned beet” tacos made from beets and sauerkraut and “lox” made from carrots, red onions and dill.

For true deli devotees, healthy eating is the last thing on their minds. Delis are about tradition. The food is that of Eastern European Ashkenazi Jews—cured meats, salted fish, dark bread and smoked cabbage. Kosher dietary laws forbid pork. Fish, dairy and meat must be separated. Authentic Jewish delis offer the “Six K’s” of Jewish food: kishke, kasha, kugel, knish, kreplach and kneidelach (aka matzo ball). Drinks must include Dr. Brown’s Cream Soda and Cel-Ray. And all sandwiches must be served on rye bread. (Milton Berle joked, “Anytime someone orders a pastrami sandwich on white bread, somewhere a Jew dies.”)

When I was young, my family patronized Art’s Deli in Studio City. Their slogan was “Every sandwich is a work of Art.” The walls were covered with photos of thick sandwiches and menus had a Yiddish-to- English glossary. Every table had pickles, yellow and spicy-brown mustard, horseradish and dried bagel chips. There were napkins to wipe the kippered herring and creamy potato salad from your lips. On Sundays, I drove with my father to Art’s for takeout. We grabbed a number and waited a half-hour as my father kibitzed with film industry friends and I nibbled on the free black & white cookie samples.

Art’s catered my bar mitzvah. Penny-pinching families opted for Jerry’s even though everyone knew the corned beef was inferior. My grandparents, who lived on the west side, loved Junior’s. I wasn’t crazy about Junior’s sandwiches, but their desserts were great. They had gooey chocolate babkas, syrupy rugelachs and fresh macaroons. Their hamantaschen, a triangular pastry filled with apricot or prunes, was delicious.

As a teen, I befriended Harold Ginsburg, the son of Art from Art’s Deli. One Saturday night, Harold opened the deli at one a.. for friends. He gave us free access to the kitchen. We invented a blender drink called a “Cheesecake Shake” with milk, chocolate syrup, malt powder and a piece of cheesecake. We made foot-high Dagwood sandwiches with corned beef, turkey, pastrami and a secret stash of ham. Harold’s only request was, “Please don’t chop off your finger in the meat slicer.”

After high school, I moved from the valley to the Fairfax District. My new deli became Canter’s even though their corned beef was sub-par and the Matzo Balls were hard as a rock. Canter’s was open 24 hours and became a go-to after-hours hangout. One of the great nights of my youth was seeing the Pixies perform at the Roxy on Sunset followed by sitting in a Canter’s booth adjacent to Tom Waits and Iggy Pop. It was surreal seeing an octogenarian waitress serve a Bronx Special to Iggy while Waits told her, “Keep the coffee coming, babe. I have a doctor’s note in my back pocket.”

In college, I briefly dated a woman who worked at Nate ‘n Al’s. She said the restaurant sold more than 10,000 pounds of pastrami a week. She cued me to the secret of a good Matzo Ball. Instead of using box mix, Matzo Balls should be made with Matzo flour, schmaltz (chicken fat) and seltzer. She taught me to always order a Mishmosh: Chicken soup crammed with Matzo Balls, kreplach, noodles, rice, chicken and vegetables.

Matzo Ball soup serves a healing function in Jewish culture. Known as “Jewish penicillin,” it’s a panacea for all of life’s ills. When a friend lost her mom in a car accident, I instinctively took her to Junior’s for Matzo Ball soup. When my wife or I feel sick, we order a 64 oz. jar of Matzo Ball soup from Factor’s. A Los Angeles Times article said Matzo Ball soup reduces blood pressure, is filled with electrolytes and contains anti-inflammatory properties. The downside is that Matzo Balls cause constipation due to the high carbohydrates and small amounts of fiber.

Delis are makeshift offices for film producers to finalize deals or for lawyers to break bad news to their clients. Jewish families gather at delis to birthdays, graduations and wedding announcements. Screenwriters love delis. Mel Brooks wrote History of the World: Part 1 at Junior’s and Space Balls at Nate ‘n Al’s. Larry David wrote numerous episodes of Seinfeld at Art’s while Quentin Tarantino wrote parts of Inglourious Basterds at Jerry’s.

A surprising survivor of the LA deli downturn is Langer’s. Located at the corner of 7th and Alvarado, Langer’s has thrived since 1947. Their success is perplexing. They’re in a bad neighborhood, parking is difficult and local traffic is a nightmare. Yet they keep churning out their famous #19 sandwich for $24 each (thick-cut pastrami, cole slaw, Swiss cheese and Russian dressing on rye bread).

A relative newcomer is Wexler’s, located in a booth at the downtown Grand Central Market. They take an artisanal approach offering their own cured lox and sturgeon, barbecued cod, homemade pickles and babka French toast. Their corned beef is good, but the portions are measly. This is also the case with Wise Sons Deli in Culver City. The pastrami sandwiches are thin enough to be appetizers. Trisha Langer, daughter of Norm Langer, recently opened Daughter’s Deli in West Hollywood. Her sandwiches are decent, but don’t compare to her father’s.

Delis are like old friends. Every time one shutters it feels like a mini-death. I recently stopped at Art’s Deli in Studio City around two on a Wednesday. The place was empty. I purchased a corned beef sandwich with a bottle of cream soda. The sandwich didn’t have as much meat as the old days, but it was still extra-lean and tangy like I remembered. It made me feel warm inside.