It’s a commentary on society. 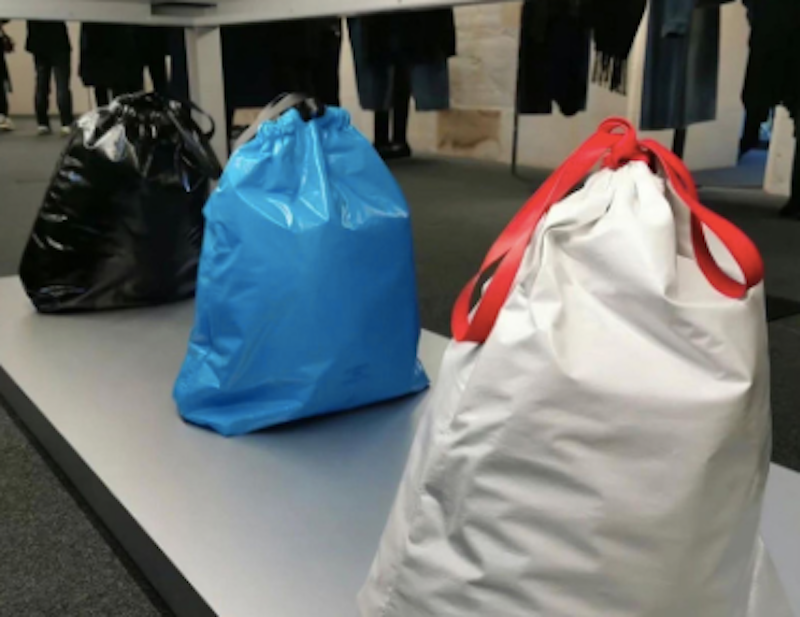 During the summer in New York, there’s nothing less appealing than the piles of garbage spread out on the sidewalks, overflowing not only with people, but also the remnants of last night’s takeout dinner. With their pungent smell, aggravated by heat and humidity, these black plastic bags are a sight for sore eyes. They’re also an extra expense for those city dwellers who once re-used supermarket shopping bags to throw out their garbage before the state banned plastic ones in 2020.

Even so, a 50-count box of Glad’s more durable black garbage bags is priced fairly affordably at about $18 on Amazon, and is billed as their solution for the heaviest loads, with “advanced rip and tear protection.” It’s not difficult to imagine, then, that those who scoff at the Glad bag’s price would probably double upon hearing the price of Balenciaga’s Trash Pouch: $1790, not including taxes.

In fairness, the Trash Pouch isn’t made of the flexible, low-density polyethylene (LDPE) of plastic garbage bags, rather, it’s crafted out of patent calfskin leather, and seems very functional. As a large sack bag, it can hold a lot, a key point for a New Yorker whose daily haul often includes not just personal essentials, but laptops, workout clothes, subway reading material, and more. But at its price, it’s no wonder that social media users have turned it into fashion’s latest hot meme. What could they expect from an item whose designer, Demna, “couldn’t miss an opportunity to make the most expensive trash bag in the world, because who doesn’t love a fashion scandal?”

Demna Gvasalia, the Georgian-born designer whose family was displaced in the wake of the Russian invasion in the early-1990s, has made similar comments—both spoken, and through his designs—in the past. His work has been influenced by his childhood in the Soviet socialist era, which he has dejectedly noted was almost devoid of fashion, and full of dull, shapeless clothes. His desire to poke fun at authority and the status quo is clear in this, and many of his previous designs: his 2017 riff on the ubiquitous blue Ikea Frakta bag, and this year’s $1500 destroyed, Converse-esque high top sneakers. He’s been called fashion’s greatest troll for a reason.

Although his may be the most expensive, Demna isn’t the only one who has done a high-end take on this household necessity in recent years. Lanvin sent their version of trash bags down the runway in 2014. Independent brands Fashion Brand Company and Amehl have made them in the past five years, and are now reissuing them, probably in reaction to the press around Balenciaga. The fact that these designers independently created their own iteration of the same item points to a larger issue. They’re all providing their interpretation of society, and the picture isn’t pretty.

Holding a trash bag can be a funny conversation starter, but it’s also about what we think of the world and our place in it. In Roland Barthes’ words, “It is not the dream but the meaning that sells.”

The greater meaning behind Balenciaga’s Trash Pouch is driving its popularity and the conversation around it. Far from a trivial item, this bag and its counterparts represent the growing view that our society is headed into the trash. It’s the rise of authoritarian, dictatorial governments, the international post-pandemic recession, regional conflicts with global implications, impending environmental disasters. These are all real issues that understandably make people—designers and consumers alike—skeptical, and pessimistic about the future.

That’s not new. But expressing ourselves, including apprehensions and fears, through memes—whether in the form of a social media post, or an overpriced, luxury version of a household staple—is new, and shouldn’t be taken so lightly. It’s a legitimate form of criticism, imbued with social, political, and economic meaning.

—Doris Domoszlai-Lantner is an historian and archivist of fashion and dress. Read more about her work at www.dorisddl.com and follow her on Instagram and Twitter @doris_ddl