Satan’s Anus: Dishwashing through the Pandemic

The filth and the fury. 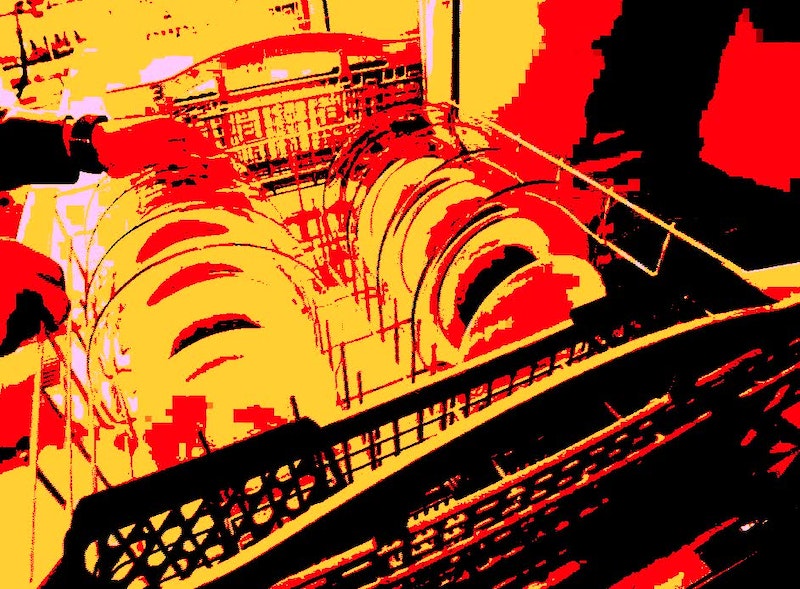 Of course they hired me on the spot. Nobody else wanted to spend seven hours a day suffocating in Vietnamese-level heat, gagging on a stupid COVID mask, getting soaking wet and wearing your muscles to exhaustion by scraping eggs, chocolate, bread dough and other muck off of trays, plates, soup bowls, assorted cutlery and Tupperware that piled from floor to ceiling.

But there was no choice. I’d become a dishwasher.

Industries are collapsing due to COVID. My own profession, journalism (or maybe it’s my former profession) is bleeding out. That doesn’t really bother me, as I long ago decided that most official journalism is garbage and I was going to think and write as a free man, no matter what the consequences. Better a free-thinking dishwasher than a very important editor or TV personality who’s a captive mind.

Coronavirus has revealed that as a culture we have, as the Jungian psychologist James Hollis put it in his new book Living Between Worlds, “lost the map.” Our old ideas of success and failure and what matters are shaken. Does the world need so many journalists?  Or managers? Or consultants? Or movies? Were they really feeding our souls?

So, like Hollis or Dante, when “the way is lost” you sometimes just have to knuckle under and walk through hell. You have to make a buck on your feet, with your chest and arms and inside your own body, not in cyberspace or on Facebook or Twitter. You revert back to those summers when you were a kid, cutting grass, shoveling snow, bagging groceries. That puts us back in touch with ourselves.

I’d plenty of experience as a waiter and bartender from my college years, but tipping would be hit-or-miss during the pandemic. I also didn’t like the late hours. I could work in a retail store, but that was too much exposure to the heavy-breathing public. Then I was walking through a town in Virginia when I came to a French bakery. There was a sign in the window: “Dishwasher Wanted Apply Within.”

A couple of hours later I had my rubber apron on. The first wave came. My back, legs, shoulders and arms creaked with muscle memory from years before, nights spent bartending at the Cinema ’n’ Drafthouse in Maryland or wrestling the punters during shows at the Bayou in Georgetown. A line from an old Batman comic came to me, when the caped crusader tossed out a line to pull himself in after being kicked off a building: No need to panic. You’ve been here before.

Wave after wave of dishes rolled in. Trays wheeled in mounted on towering carts, everything covered in cheese, dough, caramel and other goo. Big bowls appeared, clattering and filled with ice cream scoopers, knives, forks, grabbers, whiskers, and wooden gewgaws. Still more trays. And yet more. Hose off with hot water, scrape, dunk, soap off, move right to left, right to left, right to left. The cook walked by and said something in French. He didn’t know I took two years in high school. Yes it’s nice out. Oui. Il fait tres beau.

At the end of my shift I drove home, completely water-logged, sore like I just played a game in the NFL, and exhausted. I wasn’t sure I could even make it from the car to my front door.

That night a friend called, and when he heard I was a dishwasher, he said found my situation “poignant.” I’d been a book author, a contributor to places like The Washington Post and The New York Times, and the target of an explosive and well-publicized 2018 political hit. My friend reminded me of something I hadn’t though about since my time at Catholic University in the 1980s. At the end of the Inferno, Dante and Virgil can only escape hell by climbing up Satan’s asshole. “You’re stuck in Satan’s anus,” he said. “You just gotta keep climbing.”

Yes, the only way through it is through it. And the crisis, if we’re lucky, will remind us how far we as human souls have become separated from our true selves and bodies. “On a collective level,” Hollis writes in Living Between Worlds, “our culture’s treatment plans for the absence of a personal, intimate relationship with the gods are materialism, hedonism, narcissism and nationalism, as well as a coursing nostalgia for a world that never really existed. Our contemporary Odysseys are redirected to the Apple Store, the palliative pharmacy, or forays along the River Amazon Prime. Guided by Google, whereby all things are knowable, we wonder why we are so absent-spirited, so lost, and so adrift. We may say that these secular surrogates, these ‘isms,’ constitute our values, our de facto religions, those in which we most invest our energies. But we have to ask the obvious question, ‘How well are they working for us?’”