The Spirit of the Soda Can

"Redemption centers" for recycling have their own grace. 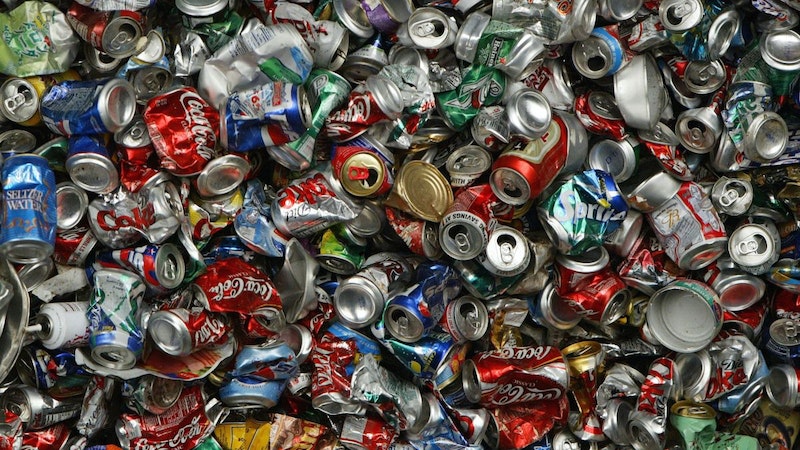 I’m in line at the redemption center. Richmond, California. Monday morning. Dropped off our three-year-old at the new preschool, after multiple “Big hugs!” Now I’m dropping off the cans. When I got here, about an hour ago, I pulled into this line as the 12th vehicle. Driving the gray Prius V with the car seat behind me, and I’ve filled it with my garbage bags of aluminum cans, 90 percent of which were once filled with sparkling water. These cans have been consumed over the last seven months, dating back to before the world flipped upside down.

For years we recycled all our aluminum cans in the big gray bins, every Tuesday. We did this in the old apartment for eight years. We did this at our house, for five years, before I started realizing we could do something good with the money from redeeming these cans. I started doing that about a year ago. Saving the cans, putting them in big garbage bags every couple of weeks. Donating the money.

It feels good to do that. Crush up can after can of sparkling water after they’re emptied. Making sure the soda and rare juices are free of the syrupy mess. Making sure the beer or sparkling wine have been cleaned out. A neighbor donates his diet root beers from Trader Joe’s. He crushes the cans with machine-like precision, leaving them flat as paper.

Here we are, mostly older guys from what I can tell, hauling cans. I’m the rare 40-year-old in this group. I asked a friend if he’d save his cans for me. He texted me back, “Fuck no!” That friend is overwhelmed with parenting, as I sometimes am. He has a three-year-old of his own. The idea of saving cans for a friend to redeem was simply too much for him to contemplate.

Redemption is an interesting word for it. As if the cans have sinned, done something wrong. In being mass produced, containing liquid, shipped, stacked at a market. Then picked up, thrown into a cart, bought, put away in a cupboard. Next refrigerated, and then finally taken out for enjoyment. Opened, poured, fizzling out their carbonation. The science of everyday. Drank. Consumed and emptied. Crushed. Thrown into a bag to wait. Then driven to this center, where they may finally be redeemed.

A scale gives this metal a hint of preciousness. Some meager value to be found on the margins. I talk to the man with the mask on about the air and how nice it is to breathe. I tell him Portland had it worse; a friend there had headaches for days, waiting for an air purifier to arrive. He said, “Worse than India? India’s got bad air.” The wildfire smoke finally let up recently for us in the Bay Area.

Trying to do some small amount of good, rather than send them back to be recycled for no money. They have a value. The value is weighed. And then I get dollar bills, which I’m half-afraid to touch without sanitizing myself. I’ll go online a few hours later and donate $100 to Fair Fight, the non-profit Stacey Abrams runs, which is dedicated to voting equality. The cash totals $70.13, which means there were roughly 1400 cans in those garbage bags. Combined with the $21 from February’s run and the $18 before that, it’s been about $100 on the year.

It doesn’t make me a better person, but it feels good to do something morally good. A small action in our time of paralysis. I know it’s an uphill battle. Over the last four years, we’ve seen how easy it is for greed to win. For inequality to grow even more extreme. For moderation to be the choice of so many, for hopes to return a sense of normalcy. What we’re in feels so abnormal, many people seek the safe and the “normal,” but what if the “normal” was never good enough. What if it were still too easy, what if the inequality was already such a problem, but we were too immune and distracted to see how serious the problem had become?

We complain about everything. We want things easy and for many of us, our lives are too easy. Where does humility and appreciation for small things, where do these things fit into our modern life, or do they fit at all? Do we have to actively go back, imagining something better than where we are now? Contradictions. Our lives are easier. Our phones dictate so much of our behavior. Helping us communicate and yet keeping us from communicating.

We sit in between, not knowing if progress is real, or if it just seems that way. When you’re in it, you don’t know where you’re going. Only with time and retrospection, with an awareness of history, do you know where you’ve been.

Right now, I sit here waiting. Behind a beat-up, red Toyota pickup, with about 10 giant garbage bags filled with cans strapped under a tarp. Waiting to go next, to redeem mine.