When the husband is away, the wife and the cousin smoke kush. 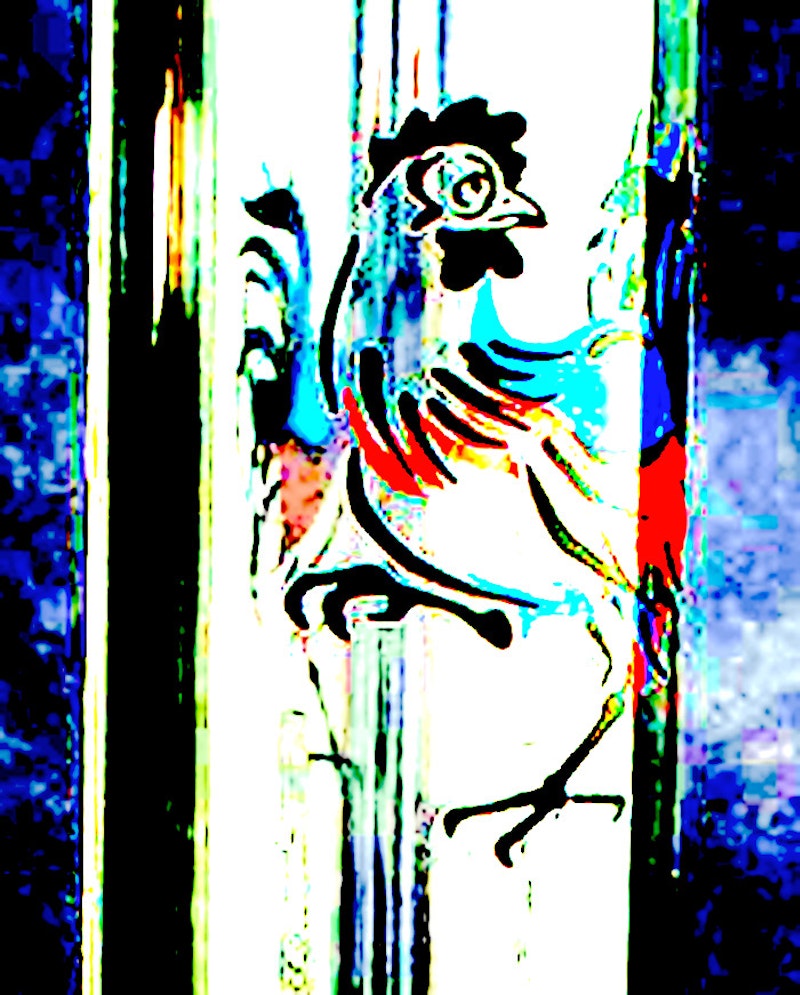 “Bennington, have you ever heard of SNAP?” No. Rooster knows I can’t “snap” my “fingers.” I’m a bird. I can’t do that. All we have in our arsenal is various calls and claw noises. That’s fine by me, but I’d prefer a wider palette, perhaps something closer to the gorilla—the male chimpanzee also has some extraordinary qualities as a vocalist. Nevertheless, I’m a bird, a rooster, otherwise known as a “chicken” by you people, and I’m brave in my stance that language is a virus and only Laurie Anderson from your world has grasped and communicated this concept on a wide level. I thank her.

Living with my cousin and his wife Monica has gotten easier since they let me smoke weed again. “I’m living da high life, mahn!” Rooster tells me to stop doing “the Jamaican thing,” Monica corrects him: “it’s patois, honey. And no, Bennington, you shouldn’t do it in public—but the barn is fine.” Rooster was appalled, and said as much, but Monica and I high-fived and did bong rips together while he just sulked in the corner, flipping through some door stopper 19th-century novels looking for a new way to describe a leaf. But women remain a mystery to this bird—that’s not true, but lately Monica and I have been hanging out a lot more.

NOT LIKE THAT. We’re friends. We smoke loud and play Super Smash Bros. for hours. I even got Monica to start smoking cigarettes again. We’re up to seven packs a day. “Seriously?” Rooster walked in and wasn’t happy. “Look, honey, all the Chinese are doing it, and if I’m a ‘chicken,’ and I’m treated like a ‘chicken,’ and society abuses me because I’m a ‘chicken,’ then I might as well act like a ‘chicken,’ hmm?” Rooster started digging into the wood flooring with his spur claws. “No. The Chinese are no model for a bird. They have no respect for our race. They hang us from shop windows and expect business. We’re merchandise for them.” Monica went ooh-ooh, and said, “Well that’s good. That’s fine by me. Better than being thrown in a ditch. At least I’m desirable.”

We don’t mind being couch potatoes waiting for the end. Why not? We saw (torrented) that movie Everything Everywhere All At Once and really vibed with it, like heavy. I mean we were straight tripping at that part with the everything bagel. Whaaaaaat. Sooo crazy, yo. Honestly. But for really though. We’re having a good time. I like eating pizza and ice cream and drinking weed water and smoking weed and living in weed and only knowing my cousin’s wife as a friend, my only friend. I’ve been in this situation before, and it’s always gone badly, but I’m pretty sure this time it’ll work out. Rooster hasn’t been home (he’s on “book leave”—what does that mean?), so Monica and I have been doing dabs.

Don’t worry, it’s still weed, or at least weed adjacent. We were smoking some knife hits when Monica pulled out the white lady. And I don’t mean Anna Kendrick. “Monica, no.” She held it up and walked towards me slowly, and my body took over and I fled. She looked like a demon. Now, I’m convinced, she is. “Come closer, Benny,” she said, wide-eyed and smiling, “the white lady loves you more.” I screamed like the guy in La Cage Aux Folles and ran out the door. I’m no longer keeping on smoking that loud with Monny. I’m back on that sober house shit.

I called Rooster. He agreed. He came back for Monny’s hot couch weed intervention. “Not even Xbox?” Rooster just hung his head and sighed, saying slowly, “Not even Xbox.” It was heartbreaking. Can’t we have any fun in this life?