Gallons of Rubbing Alcohol Flow Through the Strip

My recent trip to Las Vegas felt too fraught to be a real vacation. 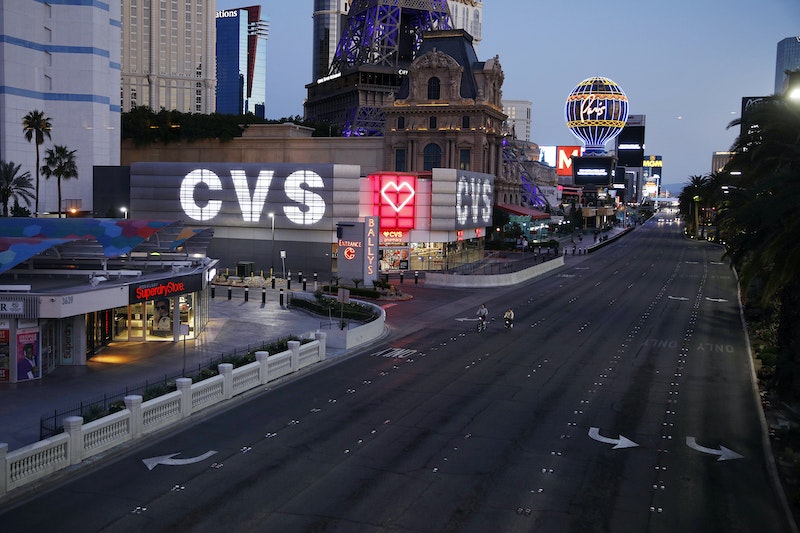 It took a global pandemic, but airport security is finally bearable. It was my first flight since early February, on Southwest Airlines, which left middle seats empty and required masks save for when one was “actively eating or drinking.”

Actually, skip the exclamation point. My trip felt too fraught to be a real vacation. More like a chance to feel the same sadness and anxiety in another bed and under a slightly worse shower, while enriching an economy of strangers (and a couple of friends in the service industry) 2000 miles from home. Since early June the Las Vegas Strip has slowly reopened its casinos and restaurants, putting in place health and safety measures like automatic thermal scanning at some of the fancier establishments like The Venetian. (My rather less fancy spot just off The Strip employed thermometer guns.) Hand-washing stations were planted in the midst of unmanned slot machines that sometimes bore signs that read “This Machine Is Off For Your Safety.” Thanks, casino!

It’s definitely a more controlled atmosphere than in June, when the sleek Cosmopolitan casino made the news with video of the mask-less enjoying themselves like nothing had happened, which made everyone else in the world angry. A local card dealer coined it the “Wuhan of The Strip.”

Also: So Much Pot. Even with the now-mandatory masks, the smell permeates every step of The Strip. I had to take more of those steps than anticipated, due to the closure of the monorail and the vagaries of bus routes due to construction. Everything looks like walking distance but isn’t, a lesson it’s taken me several trips here to absorb.

The town isn’t back to normal yet. September hotel occupancy was down 30-50 percent from the same time last year, relatively worse on weekdays. The MGM Grand, which may go to a weekend-only schedule, had even masked up its famous lion. An empty stadium has greeted the first season of the Las Vegas Raiders, the city’s new National Football League team via Oakland (via Los Angeles) that actually threatens to be decent this year.

A Thursday morning stroll on the strip, heading southbound from the colorful Peppermill restaurant, was depressing. I’ve published two short stories set in a post-apocalypse Las Vegas and figured this was my chance to experience it for real, but despite the higher than usual ratio of derelicts-to-tourists it didn’t feel dangerous, just desolate. But things picked up significantly as the weekend approached. For a tourist town, mask compliance was surprisingly strong, even outdoors, though it waned in the afternoon as the temperature rose. There were shorter hours and closed shops, especially at the high end—no aqua brushed leather shoulder bag from Prada for me.

Some things in Vegas (like sneaky resort fees and perfectly nice drivers with very strange ideas about the world) never change, although there were some virus-induced fits and starts. Nevada’s vote-counting process proceeded with more alacrity than my hotel’s breakfast service. The familiar canned casino music, now audible in the unusual quiet, strangely ended up being my favorite part of the trip, somehow providing poignant escapism into happier times—“One Way or Another” by Blondie, “Free Fallin’” by Tom Petty, and “Girls on Film” by Duran Duran, whom I saw perform some 15 years ago at Mandalay Bay casino in Vegas, back when such things weren’t against the law.

Some Las Vegas attractions are tiptoeing back on stage, like the hip acrobatic cabaret Absinthe, with mandatory audience masks and other changes. The state-mandated 25-foot gap between the stage and the closest audience member is proving a challenge for many shows looking to re-open.

The bad news for me was that the illusionists Penn & Teller were on pandemic hiatus. The other bad news was that Carrot Top wasn’t, though he has been forced to relocate to a larger space at his base at Luxor, with the audience capped at 250, per state regulations. Top lamented to a Las Vegas Sun podcast that, “Audience interaction and that kind of stuff is going to be hard [to replace] there, because it will be less intimate, less one-on-one with the audience, which I think is one of the things that makes my show fun.”

If one consequence of COVID is that I can buy a ticket without the risk of spending the evening on stage with a comedian, I’ll take it. Seriously, it must be hard for comics and other performers to read the room when the audience is far away with their faces covered.

I was oddly happy to see two men in crumpled matching outfits, obviously suffering, hanging on to a moving handrail with one moaning “Why did we stay up all night?” I’m glad they found something to do, as very few nightclubs were open and those that are require expensive reservations. I did go to a smoking bar and felt hedonism-adjacent for a while. It was a novelty to worry about something else airborne besides the virus.

Fleetingly, Vegas felt normal. Construction was ongoing both on S. Las Vegas Boulevard (aka The Strip) itself, and at Resorts World, a casino hotel due to open on The Strip in the summer of 2021, signs of optimism for the city’s tourism trade. I wouldn’t bet against Las Vegas just yet.