Show Us the Camps

Monica protests outside of a Dairy Queen and a McDonald’s demanding to see photos of the factory farms where flightless birds are bred and murdered. 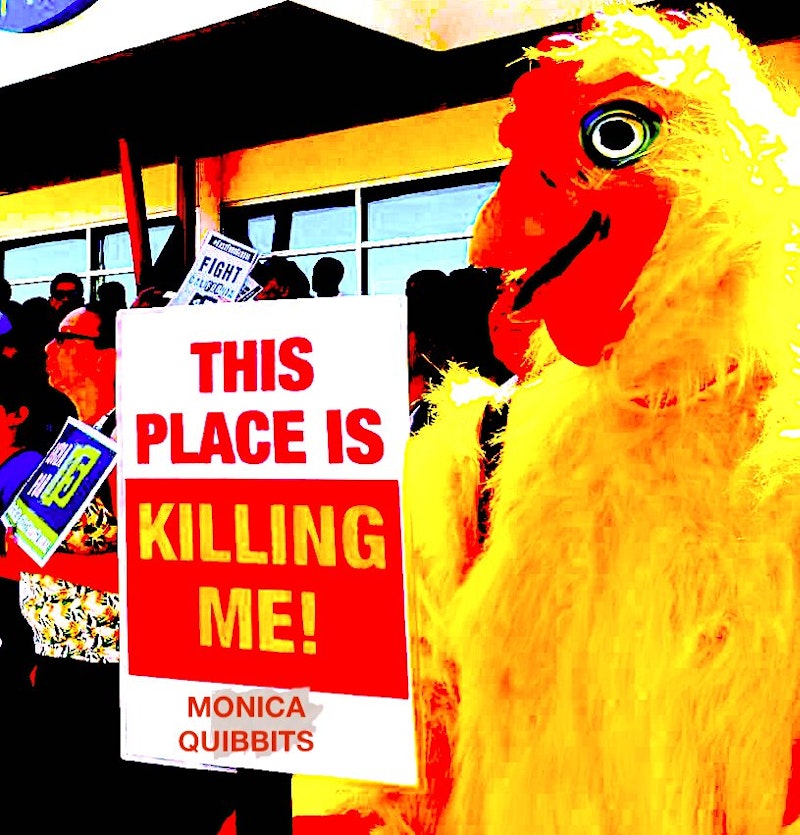 Pictured: A representative for the author at a protest, date unknown.

“THEY ARE NOT SHOWING THE CAMPS! I REPEAT, THEY ARE NOT SHOWING THE CAMPS!” I’m outside of the Dairy Queen in Enfield, Connecticut. There’s no one here. It’s raining: maybe that’s why. But then I remember, no. Coronavirus. How much our lives have changed. How much love has been lost, how many tears run dry in the rain… I’m holding my sign and I’m screaming, I’m begging people who are not here to stop doing what they are doing and to make the Dairy Queen show the camps. I will not rest until they show the camps.

I’ve been here all week. It started raining on Wednesday. I brought boots. I’m wearing tactical gear and I’m unarmed, but I’m very aggressive and somewhat hostile, depending on whom you ask. If you’re a singer or a hairdresser who can give me a mani-/pedi-/hackle-cure for free in the parking lot, I’ll be slightly less mean to you. Otherwise I’m on my bitch tactics. It’s the only way to make sure that they show the camps.

“SHOW THE CAMPS! YOU ARE NOT SHOWING THE CAMPS!” Lights are beginning to turn on around the Dairy Queen. It’s rather late, somewhere around three in the morning, and people in their awful white New England shack houses are beginning to wake up and hear the hen howl. These people know me, I’m something of a “fixture” in the neighborhood. Imagine if you would a split-diopter shot—as you’d see in a film by Brian De Palma—with me in the foreground and a concerned married couple in their house in the background. We see them, in focus, through their window. They talk to each other as I smile. It looks like I’m listening, but really I’m thinking about buying Bionicles later.

“Angela, you don’t know what you’re asking me. I can’t just go out there with a gun and—” Angela slaps her husband and I smile. “I’M GOING TO BEAT THE BITCH WITH A BAT!” She grabs the bat, pushes her husband onto the ground, and runs outside to meet me. I didn’t bring my bat, so I’ll have to sit this one out, or at least play dirty. I spur-claw Angela, tearing her Achilles’ tendon and leaving her screaming, bleeding, and helpless on the pavement in front of the Dairy Queen, which is closed, in Enfield, Connecticut.

I’ve been to other Dairy Queen establishments before. Yes, they sell “chicken,” and I’d like to remind the reader of the primary ingredient in “iced cream”: it’s cow’s milk. It’s the duty of all exploited birds to stand in solidarity with our massacred spirit animals. Heifers, bovines, bulls, cows, whatever you want to call them, well, they’re very nice, but they don’t make for great conversation. It’s a shame, you’d think with four stomachs they’d have more to say. They’re just not interested in thought. All cows know is eat grass, fart, and lie.

I’ll admit, I’ve had a hamburger. Yes, with meat. This isn’t cannibalism, it’s natural. If the image of an anthropomorphic “chicken” eating a beef hamburger upsets you, perhaps consider what capitalism has done to your brain. Or how you’ve alienated all of your friends and the only family you had left alive in the hopes of achieving some kind of media victory and validation, a quest sought but never considered? I did eat the hamburger, and with mayonnaise, as well. You could call that “cannibalism,” I just call it kinky.

But that’s not my concern. Right now I’m outside of the Times Square McDonald’s, waving my signs, screaming my slogans, and no one is around. It doesn’t even look like the McDonald’s is open. Actually, it doesn’t look like anything is open. The weather hasn’t turned yet—what’s going on? I stop a passing mascot—Elmo. He gives me the gist: “Coronavirus, Monica. It’s horrible. Personally, I don’t believe in it. Why should I? I never got to go home. I can’t work from there. People want to see Elmo in person. Why would they want to see Elmo on a screen? No one has ever loved Elmo on a screen.” He walks away before I can talk about myself. I suppose the pandemic has tamped down on consumption in America, but there’s no way every McDonald’s in the country is closed. Perhaps I shall go to the camps myself.

As I leave, Elmo runs up to stop me. “Don’t go, Monica. I’m so cold…” Elmo leans in and shows me his arm, scarred with track marks and cigarette burns. “I’m so scared… the NYPD wants me dead.” I ask him if he participated in any of the recent protests. “Of course not, I’m not stupid… they’d blame anything on Elmo if Elmo were nearby… I keep to myself.” I stop myself from pointing at his arm and saying, “I can see that.” Would’ve been pretty funny, though. You get to enjoy that thought with me.

I give Elmo $100, but before I can give him my “big speech,” he’s three blocks south running off to get well. I guess I need someone or something to fix me, too. Sometimes I look at the people on trains, or in restaurants and airports, and I want to scream. Other times, I think to myself, “I could fix them…” I must always remind myself that I’m the only one I can fix, only I am responsible for my habits and actions. But telling people to fix themselves? There’s no limit on piety, my friend. There are no limits on heckling in the United States of America, darling. Now, repeat after me: “SHOW US THE CAMPS!”

We will shout on every street corner until the last factory farm is closed. Amen, l’chaim, inshallah.