An Impassioned Plea: Stop Eating Us

Roosters may hate turkeys (I do), but we’re begging you: end this ghastly tradition. 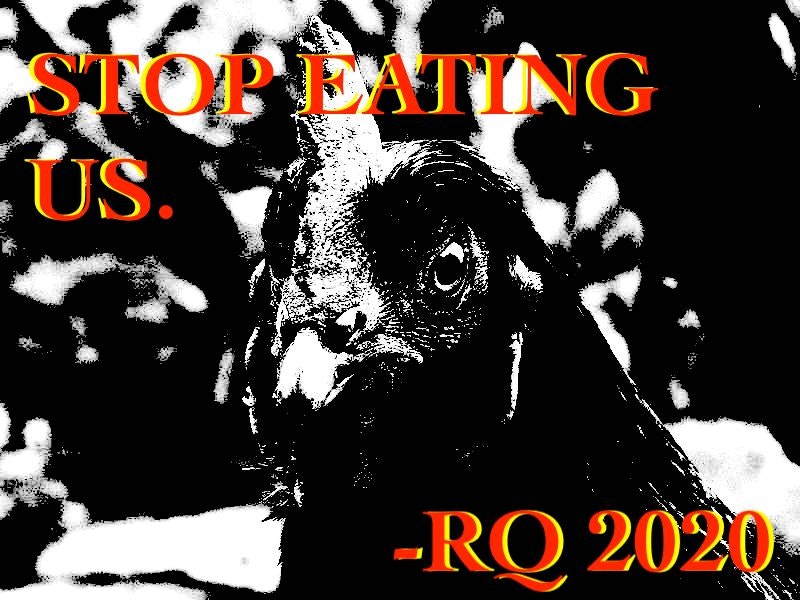 They used to play our songs on the radio. Not anymore. We had our own music, our own culture. It was downstream from mainstream: all exploitation, schlock and junk food made to fill bellies and latrines, nothing else. There was no consideration of “Art” in the “chicken-houses,” as they were called. The argot of an oppressed minority often takes the character, even the exact form, of its oppressor. We called each other “Chicken Wing” because we could. It was shocking. Those of us lucky enough to work in the music industry were just happy to be employed for a human corporation intent on something other than our death.

I remember working with Marco Ferreri, the Italian New Wave director who loved to eat and fart. He was obsessed with bodily functions—“I make physiological cinema”—and so naturally we weren’t close at first. I regarded him with suspicion and envy: why wasn’t I a film director? Why wasn’t I famous? Ferreri, everyone always called him “the most underrated director in Europe,” and he’d laugh, but then he’d cry (like Pagliacci). “My cinema is not yet of this world.” Yes, Marco, I told him: you are from the future.

He smiled and had a heart attack—this was never reported. He’d just completed pos on La Grande Bouffe and had already set up his next film, Don’t Touch the White Woman!, with much of the same cast and crew. He couldn’t afford a medical scare. So I filled in for a few days: I took calls, interviews, talked to journalists about “my physiological cinema,” farted and squawked into the phone, generally did my best to enrich the reputation of a “sorely undervalued” European art director. We’ve contributed so much society, and you know nothing of it. But Marco was a good man. I’m glad I got to see him shortly before his death in 1997, guzzling prawns and champagne on the Croisette. “Let me tell you, chee-chee”—his nickname for me—“Invertebrates always taste better.”

He’s right. Remember that the next time you go to a restaurant for $70 takeout.

Another good man: Prince Rogers Nelson. There was no slaughter at Paisley Park, as I’ve written before. Recording with the Purple One in the 1990s was an honor, even if he’d gone into commercial eclipse. No matter: he still sold out theaters and arenas, whenever he wanted to, because he was cool like that. He wasn’t trapped in Wonderland like MJ and Bubbles (a friend). Prince could work and play all day and all night long, even if he was nursing a chronic pain condition that eventually led to his death.

Whoever created Fentanyl needs to be locked in a small box at the bottom of a canyon and forgotten about. One day there will be monuments to their victims.

As I wrote in 2015, recalling the mid-1990s, my work in Minnesota remains a fond memory: “Seventy-two takes were attempted that night, and by the time Prince was satisfied and ready to move on, it was nearly dawn. We were allowed a quick pecking break, and outside, as the morning sun rose over winter’s bare trees, we heard the call of our Minnesotan brothers echo and refract over the country. I’ll never forget that moment—at wit’s end, I was moved to tears by the call of our kind, grateful to hear their song and knowing that they, too, were free.”

I hope those geese are still flying, or eagles, or whatever the fuck was flying that day. I might’ve been hallucinating. I took a lot of pink and purple pills at some point. Anyway, I’m still here, and ultimately that’s really all that matters. So’s Monica, my wife (who I love), and my cousin Bennington, a handful (drug addict, sexual deviant, terrorist). We have our barn, but more than that, we have our memories. We’re still here, but hundreds and hundreds of others we’ve known through the years are not.

Yesterday was tough—Thanksgiving is always is for us birds. I don’t like to get all sensitive, but we just don’t like that you do this to the turkeys every year. I may not like turkeys, hate them even, but they’re kindred. They are kind. And they’re people, too. So this is my impassioned plea, one that comes every year a day too late: stop killing and eating turkeys. You’re hurting us all. Why do you think all your eagles are bald? They’re stressed out, and they’re sad. They like turkeys. We don’t. But that’s fine—in America, this beautiful country of ours, we can agree to disagree, and walk away. That’s what I’m thankful for, on this, Indigenous Avian Day 2020.