This Must Be the Real World

Pandemic notwithstanding, Black Friday as a cultural bonanza is on life support. 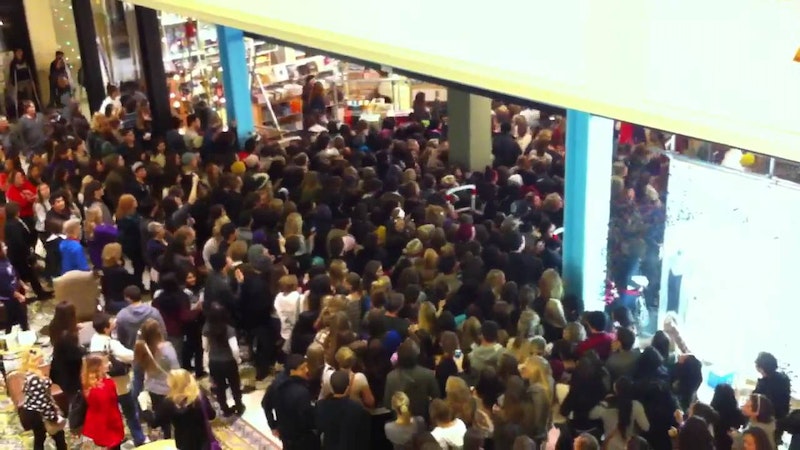 The economic ramifications aren’t yet determined—and won’t be until, say, a year after the pandemic’s eradicated—but the decimation of de facto national holiday Black Friday is a curious cultural switcheroo. Many of the same scolds—usually in the media, not owners or employees—who, just five or six years ago lampooned the “rubes” who waited on line for hours to get inside a big-box retailer the day after Thanksgiving, and delighted in pointing out occasional violent incidents among those fighting for the last “kid’s toy of the year,” are now dumping on e-commerce giants, chiefly Amazon, for further isolating Americans from one another.

I never did fathom the allure of Black Friday—brushing against frantic bodies in search of a “deal” isn’t appealing, and the only crowds I’ll endure are at a sold-out baseball game for which I already have tickets. When he was in high school, my younger son, along with a buddy, made a pilgrimage three years running to retailers in Baltimore County, and while they didn’t buy much, if anything, had a grand time.

Puzzled me, but the pastimes of teenagers hop from one fad to the next, and I guess he didn’t understand the thrill my friends and I experienced in 1970 and ’71 when we “cruised” in our parents’ station wagons and knocked over garbage cans—the driver pretending to lose control of the vehicle—or covered a classmate’s (one out of favor for some faux pas that was forgotten within a week) with roll upon roll of toilet paper. My own house got the treatment one early morning in 1971, but fortunately, as an early riser I was able to clean it up before my parents got up, crucial since the house was for sale.

Anyway, Black Friday was—and I think the past tense is warranted—a mostly harmless diversion and the participants didn’t deserve the stigma that was rained upon them by supposed sophisticates. It’s really in the same category as yet another de facto national holiday, Super Bowl Sunday each February—although this is more widely-accepted, for the office betting pools, the parties, some with elaborate buffets, most just outfitted with loads of crummy pizza, snack foods and a shitload of beer, the people who claim they only tune in for the new and exorbitantly-priced commercials, and the annual critiques of the halftime show. And there’s the football, as well.

I liked watching football as a kid, but that went by the wayside once I started college, and now count off the weeks until the NFL season is finally completed, for that means MLB spring training, the regular baseball season and warmer weather are around the corner. It’s just personal taste: you watch football or March Madness, and I hang on every Red Sox inning while checking my phone with the hopes that the Yankees are losing. (Incidentally, as the thermometer drops, I can’t shake the feeling—a picayune COVID-related complaint—that baseball fans lost the summer, since those months are in rhythm with wins and losses.)

Last Sunday, I read with interest a New York Times article by Alec MacGillis (an industrious reporter currently with ProPublica, and civic-minded Baltimorean), headlined, “The Loneliness of One-Click Shopping.” Aside from the poison arrows aimed at Amazon, the story was a nostalgic look at the now-gone era of department store shopping, and MacGillis focused on the defunct chain of Bon-Ton outlets (I’d never heard of it) its (unstated) adherence to the maxim “The customer is always right” and the attention salespersons gave to individual shoppers. I was never a fan of such huge emporiums (from an early age I remember getting claustrophobic at places like Macy’s, A&S or Chicago’s Marshall Field’s), preferring more manageable clothiers and ramshackle book and record stores.

It’s hard to see a future where such small retail outlets once more thrive, but I endorse a never-say-never stance on that one. This following passage in the MacGillis story did hit me the wrong way: “Americans who might once have felt qualms about buying from Amazon now have social license to do so—it has become our patriotic duty, our cause larger than ourselves, to fulfill our needs online. By placing a one-click order, we have been helping to flatten the curve.” That bellows sarcasm, but I think MacGillis is serious, if just a bit jocular. (This topic is more than a hobbyhorse of MacGillis’—he often posts on Twitter, recommending independent stores in Baltimore—as his book Fulfillment: Winning and Losing in One-Click America is coming out in March. I learned about that on Amazon).

He doesn’t mention the often-unnecessary lockdowns in many parts of the country, which have prevented citizens from patronizing places other than Amazon, Etsy or eBay. All you need is a mask and a store that’s open, and you’re set. Also, the line about “people who might once have felt qualms about buying from Amazon” is just wrong: it’s more likely that people no longer feel the need to keep secret their Amazon shopping, since increasingly in the past 15 years, almost everyone does it. I certainly do: for example, it’s pouring as I write now from Baltimore; I’d planned on a short outing to a local retailer for a Christmas present, but had no interest in getting drenched and instead went to Amazon and made my purchase (and saved a few bucks). Likewise, my wife searched in vain at several stores for an iron-on patch to give my favorite pair of cords another two months before they turns into rags, and so went the one-click route.

This surprised me: in Monday’s Wall Street Journal, a story about the tepid Black Friday, there was this statistic: “U.S. consumer spending has been strong despite the economic shocks and shutdowns tied to Covid-19. The National Retail Federation, a trade group, has forecast that holiday sales will increase at least 3.6% to about $755 billion, including at least 20% growth from online shopping to about $202 billion.”