From Inca Kola to Boga Cidre

The author examines the globalization of everyone's favorite carbonated beverage. 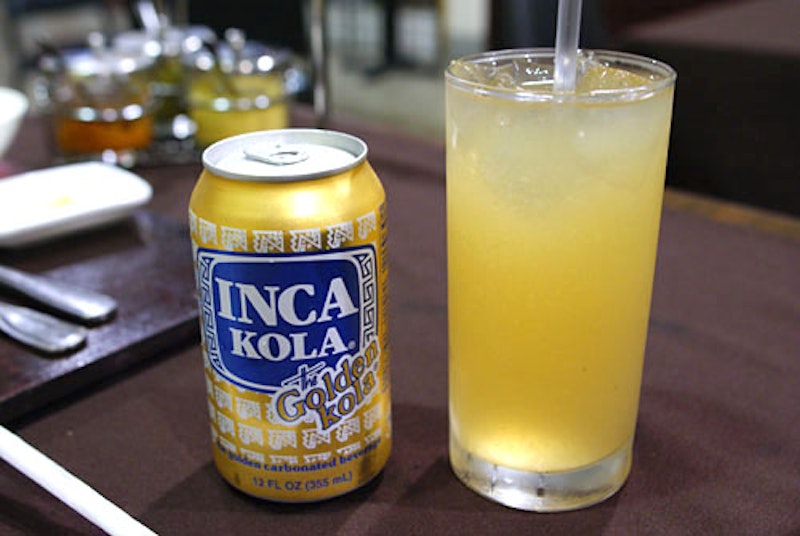 A couple of years ago I threw a party. I don’t hold parties often, but in this case there was a specific idea.

I lived in Montreal’s Nôtre-Dame-de-Grace district. NDG’s an ethnically diverse area, featuring a number of markets and corner stores—dépanneurs, in the Québec vernacular—many of them owned by immigrants, and catering to people from around the world. When I bought groceries from these places I’d see something unusual in the store’s freezers: Soft drinks. Not Coke and Pepsi and ginger ale and the like, but sodas boasting flavors I didn’t see in corporate grocery stores. Banana sodas; watermelon sodas; even champagne sodas. They piqued my curiosity, but they usually cost a little more than the everyday soft drinks, and faced with higher prices I have a habit of falling back on what I know.

So it seemed to me that a dedicated soft-drink-tasting party would be a good way to finally gratify my curiosity. I’d gather the wares, invite friends, and we’d taste the drinks as a group to see what worked and what didn’t. It wasn’t hard to find people up for trying free sodas. My girlfriend and I found drinks to serve from every continent except Australia. Then I decided to look online for information about the different flavors, so I could properly present the drinks to my friends. I was surprised to find out about the diversity of origin of the sodas, the anecdotes around some of them, the stories there can be behind a soft drink.

Take Inca Kola, a bright yellow soda that came, unsurprisingly, from Peru. I learned that Coca-Cola’s the most popular soft drink in every market around the world—except Peru, where Inca Kola, introduced in 1935, has beaten it consistently since the 1940s. In 1995, Peruvian McDonald’s franchises began selling Inca Kola alongside Coke. Inca Kola, which tastes a bit like bubble gum, is locally made, and from what I read, its success was something of a source of national pride. Finally, in the late 90s, Coca-Cola bought half of the family company that makes the drink; as part of the ceremonies around the acquisition, the CEO of Coca-Cola flew to Peru to attend a press conference and, in public, take a drink of his competitor’s product. The conference was apparently seen as a victory of a small Peruvian business over a major American corporation.

I realized that I was used to thinking of sodas as strictly commercial mass-market items. Which to an extent they are, but narratives can grow around those kinds of items as well as any other. Like any type of food or drink, a soda is a cultural product. Not every drink will have a story around it, though some will. But the flavor of a drink, the way it’s marketed, these are born of local conditions. If North American soft drinks have colonized the rest of the world, local traditions still persist in soda form as well as in any other.

Inca Kola was only one of a number of drinks we found from South America or the Caribbean. Among them were sodas the flavor of sorrel, fruit punch and banana—tasty, that one, exactly like a banana popsicle turned into a soft drink. Ting, a grapefruit cola, originally came from Jamaica; it’s a little tart, the party judged, but distinctive. On the other hand, Kolashampan sold itself as “The Taste of El Salvador,” and we concluded that if that ad copy is right, El Salvador tastes like mediocre cream soda. (We also learned that “champagne” in a soft drink context means “cream soda.”)

From Tunisia we found Boga Cidre, a soft drink made from carob beans. It was slightly bitter, not unlike root beer. Its name was an abbreviation of the French for “soft drink,” “boissons gazeuse,” a reminder that Tunisia had once been a French protectorate. I was amused to find the drink had attained a minor kind of cinematic immortality: the makers of the original Star Wars had grown to like the stuff when they’d filmed in Tunisia in the 70s, and when they made the prequel movies the soda’s name turned up as the name of Obi-Wan Kenobi’s mount in Revenge of the Sith.

From Italy came Frizz Cola, a sweet carbonated coffee drink. I found a website for it, featuring machine-translated text and several pictures of women in swimsuits photoshopped to hold bottles of Frizz. Like Inca Kola, the drink’s the product of a family company, in business since 1945.

Asia had a phenomenal number of drinks. A Chinese company, Starswings, produced lychee-flavored soda. Taiwan’s Oceanic Beverages made an apple-flavored drink. Japan’s Shirakiku Ramune has several different flavors (originally “ramune” was apparently a phonetic derivation of “lemonade”), and a distinctive bottle design: made of glass, it’s sealed with a marble that you plunge down into the neck of the bottle. Wikipedia tells me that kids love it because from a certain angle the top of the bottle looks like an alien head. Also from Japan was Suntory’s C.C. Lemon, which tells you how many lemons’ worth of vitamin C you get in each bottle. The bigger the bottle, the more lemons the drink promises. I have my doubts, as the nutritional information label tells me that in fact there was no vitamin C in the bottle I got.

Korea’s Lotte produced Milkis, a milk soda. Reaction to Milkis was oddly divided along gender lines. Most of the males thought, “Hey, this is a lot better than I’d thought. Milk solids and sweet carbonated water is basically what you have in an ice cream float once the ice cream’s melted. Which is what this tastes like.” Many of the women, on the other hand, thought the stuff tasted like semen.

The stuff about which there was total unanimity came from Iran. While most of the drinks were overall well-received, Abali yogurt soda was agreed to be awful—not simply “bad,” but “give me something else right now to get this taste out of my mouth” terrible. Admittedly, none of the people at the party had a Middle-Eastern background; I later heard that if you start on the stuff young enough, you develop a taste for it. If nothing else, it was a useful reminder that no taste is universal.

One of the friends I invited was from England, and he was excited because he loved a certain English soft drink called Lucozade, which he looked forward to introducing to the rest of us. But he ran into a problem—he couldn’t find the stuff anywhere in Montréal. He even went so far as to e-mail the company who made the drink, and they told him that it wasn’t distributed in this part of the world. He turned up crestfallen, only to learn that my girlfriend had happened to pick up a couple of bottles (one lemon-flavored and one orange) in a store in Chinatown earlier that day. She hadn’t known they were British, as the bottle was mostly covered with Chinese characters. The drink had been imported into the Chinese market, with appropriate trade dress, and then imported again into a Chinese grocery store in Montréal.

All these drinks, all these flavors, available within walking distance of my front door. It sounds like a Tom Friedman parable in syrupy carbonated form. And it is that; certainly globalization has something to do with the ease of finding these sodas from outside the North American mainstream. But so does Canada’s relatively welcoming immigration policy—about one in five Canadians is an immigrant (compared to about one in eight Americans). So I look at it in another way, as a parable about multiculturalism. The number of stores run by new Canadians, and their choice to stock goods appealing to other new Canadians, leads to a greater variety for everyone.