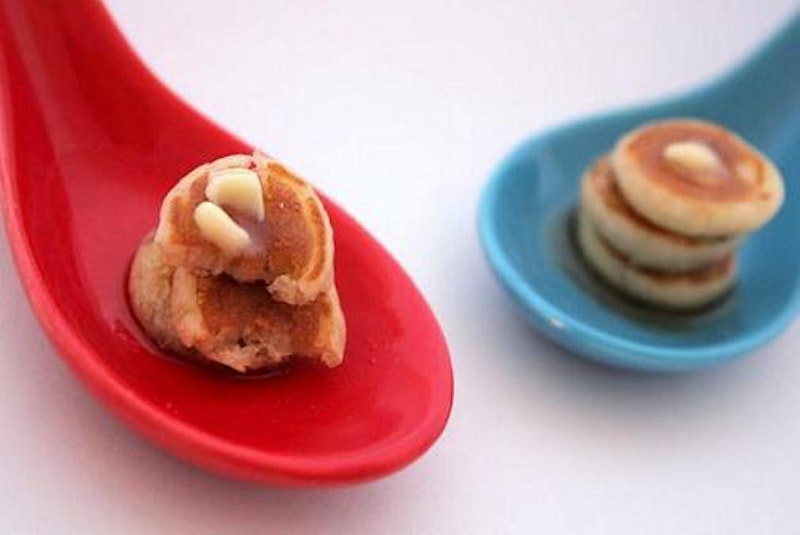 Amazing, isn’t it? What we can get away with, I mean. Like pizzas. Pizzas aren’t getting smaller or appreciably more expensive, are they? Part of the reason why is that if the dynamics shifted suddenly and significantly—if pizzas doubled in price, while contracting to half their current size, across the board—consumers would riot, and because almost everyone enjoys pizza, retribution would be swift and crude. Anti-corporate types like to snarl at most things pre-fab, but one benefit the frozen crusts most pizza chains use is that it keeps the employees reasonably honest, in terms of how large the pizzas are. So maybe your pizza is late, or overcooked, or undercooked, or perhaps the quantity of toppings is pathetic or the whole thing is soaked in grease, but without fail you can count on that pizza being the size it’s supposed to be. Nobody can fuck that up.

Pancakes are a totally different ballgame. The rules aren’t even endemic to each chain, or even to each franchise in a chain, but to each line cook. There’s no need to single out any one restaurant here; everybody’s got uneven batter spattered on their aprons. No sidestepping it: the average, tradition buttermilk pancake, an average of six to seven inches in diameter as recently as a decade ago, is now around four to four inches and shrinking fast. The days when one would order a full stack of flapjacks and a glass of milk—no more than that—and really struggle to power through every last bite of those five syrup and butter slicked pancakes because, fuck, that platter was gratuitous, over the space or 30 or 45 carefully paced minutes? Those days are long gone. Today, you’ll polish off that full stack in seven minutes flat and immediately start eying up other people’s pancakes, licking your own plate clean, busying yourself with the business of requesting, preparing, and knocking back more cups of coffee than you really need to drink.

The economics of this aren’t hard to parse, and the business model is hardly novel; the more interesting question is why no one is up in arms about this is terms of pancakes. Perhaps the answer is that nobody cares quite enough about pancakes; that pancakes, as part and parcel of breakfast as an idea, don’t mean anything, in the same way that bacon or sausage or grits or eggs don’t mean anything, because breakfast is something we get through en route to starting the day. With so much to look forward to, or dread, a mediocre breakfast is quickly forgotten, because in all likelihood we weren’t there mentally while dissecting and dispatching it. (On the flip, a splendid breakfast stays with the diner and may merit an effusive referral among friends. By contrast, pizza is generally a dinner meal; expectations for dinner, regardless of whether it’s a date situation or just a family sit-down, are generally higher, maybe because dinner represents the day’s climax or culmination, or the prelude to it.) So there’s a divide there, is what I’m saying, comparable in some ways to the widening gulf between the very rich and the very poor. Everybody protests, perseveres, or funds super PACs, and the meaning of the phrase “silver-dollar pancakes” continues to devolve, and nobody much cares.