There are more lies, making this a book of horror. 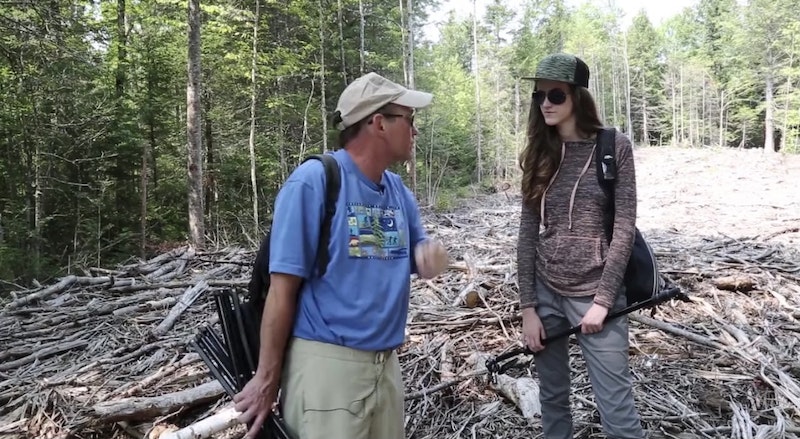 Derrick Jensen, along with co-authors Lierre Keith and Max Wilbert, in Bright Green Lies take as a given that climate change due to carbon emissions is causing devastation to the planet, with horrifying facts such as that in the last five decades, “humans have killed 60 percent of the earth’s animals.” Most readers will anticipate the villains: corporations, capitalism. But what about the environmental movement that was supposed to be fighting those villains, fighting for us? As the authors put it, “Something has gone terribly wrong with the environmental movement,” and that’s that the environmental movement is lying to us about solutions.

The authors offer vast experience as writers, journalists and activists. Jensen, author of 25 books about the environmental movement, is co-founder of the organization Deep Green Resistance, along with co-writers Keith and Wilbert.

The term “Bright Green” is what Jensen et al. use for that part of the environmental movement that tells us that technology and capitalism will save us. For example, if we all invest in solar energy panels for our houses, we can save the world. The “bright greens” appear in the middle (centrists) of what the authors call a “Spectrum of Environmentalism,” of various environmental groups or philosophies. The Bright Green philosophy defined as: “Environmental problems exists and are serious, but green technology and design, along with ethical consumerism, will allow a modern, high-energy lifestyle to continue indefinitely. The bright greens’ attitude amounts to: ‘It’s less about nature, and more about us.’”

This book demonstrates how and why this philosophy is wrong. The Bright Greens hue to libertarian philosophies, from the “Wise Use/Environmental Managers,” to the “Cornucopians,” to the “Technocrats/Trans-Humans,” which go from “the status quo is fine”. Jensen et al. are writing from the far other side of the spectrum. There is a little bit of the “Lifestylists” philosophy, which is that “Humans depend on nature, and technology probably won’t solve environmental issues, but political engagement is either impossible or unnecessary. The best we can do is practice self-reliance, small-scale living, and other personal solutions. Withdrawal will change the world.”

But Jensen won’t stop at the idea that this is “the best we can do.” Personal solutions are part of what they’re arguing here, but they’rerooted in the far side of their spectrum, as Deep Greens, who feel that “The living planet and nonhumans both have the right to exist. Human flourishing depends on healthy ecology. To save the planet, humans must live within the limits of the natural world: therefore, drastic transformations need to occur at social, cultural, economic, political, and personal levels.”

Unfortunately, the “drastic transformations” will probably happen to us.

The “lies” part of the title refers to the lies of the mainstream environmental movement, taken over by the Bright Greens. Bright Green Lies builds on the arguments made in the movie Planet of the Humans, directed by Jeff Gibbs and produced by Michael Moore, which they released on YouTube last year. That movie created a stir, and the MSM, including YouTube, tried to dismiss, censor, and lie about it. There are powerful forces that don’t want anyone questioning the Bright Green environmental movement, because there’s big money involved in Bright Green “solutions.”

The biggest bright green lie is that moving to “renewable” power, or “renewables,” will save us. Renewables is a handy, intentionally catch-all phrase: it sounds good, but solar and wind energy, which most people would assume are “renewables,” account for only a small amount of all renewable energy—the larger percentage is from hydroelectric and “biomass.” Jensen et al. write about the awfulness of dams: just look at what Glen Canyon Dam did to the Grand Canyon. But, again, when mainstream bright green environmentalists argue for more renewables, they’re in part arguing for more dams.

But the real lie here is the term “biomass,” which is trees. This “renewable” resource is actually forests harvested and ground to pellets, and in many cases in the United States, sold to other countries, like Germany, as part of their “renewable” success story.

Bright Greens also lie about solar and wind energy in the sense that these technologies rely on resource extraction, i.e. mining, which is never good for the surrounding land people and wildlife. Solar panels in particular (and smart phones) require rare and toxic materials, from mines in Africa, Asia and South America. The solar panels that rich and middle-class white people are buying and installing come at the cost of environmental devastation of poor people of color on the other side of the world. Also, the energy required, using fossil fuels, to make solar panels and windmills effectively negates any gains made by using renewables. They’re all for show. And worth noting: those panels become toxic waste after about 20 years.

There are more lies, making this a book of horror. One lingering question, not answered, is how Bright Greens live with themselves, since they must know that what they’re saying is wrong. How do Bright Greens like Bill McKibben and Naomi Klein—who have written important books of their own—not see that cutting down trees and calling it “biomass” is a huge lie?

The “solutions” part of Bright Green Lies is the most depressing, because the solutions needed are so huge. There are no “Ten ThingsYou Can Do To Save The Earth” “listicles” because that’s Jensen et al.’s point: that kind of cuteness is meant to make us feel better about ourselves while mega-corporations plunder the planet. Instead, weneed to “stop civilization,” and “stop believing technology will save the planet.” They’re arguing for a return to “land-based economies”—not living in cities—more of a return to living like natives did thousands of years ago. That plus a complete stoppage of all mining and timber harvesting. So, basically, impossible.

If there’s one small hope to reverse climate change, according to scientists quoted in Bright Green Lies, it’s restoring grasslands and forests. According to soil scientist Dr. Rattan Lal, “A mere 2 percent increase in the carbon content of the planet’s soils would offset 100 percent of all greenhouse gas emissions going into the atmosphere.” That quote comes from another book, by Ronnie Cummins, Grassroots Rising: A Call To Action On Climate, Farming, Food, and a Green New Deal, in which he writes, “Our living soils and forests have the capacity to sequester and safely store enough carbon to bring us back to the safe levels of CO2... that we had before the advent of the industrial revolution.”

Hoping for these huge solutions and changes, hoping for governments and environmental organizations to do something is what causes despair. The authors’ most practical advice to individuals: “Find something you love and defend it.”