If you still have Campbell’s cans with the old labels, save them. 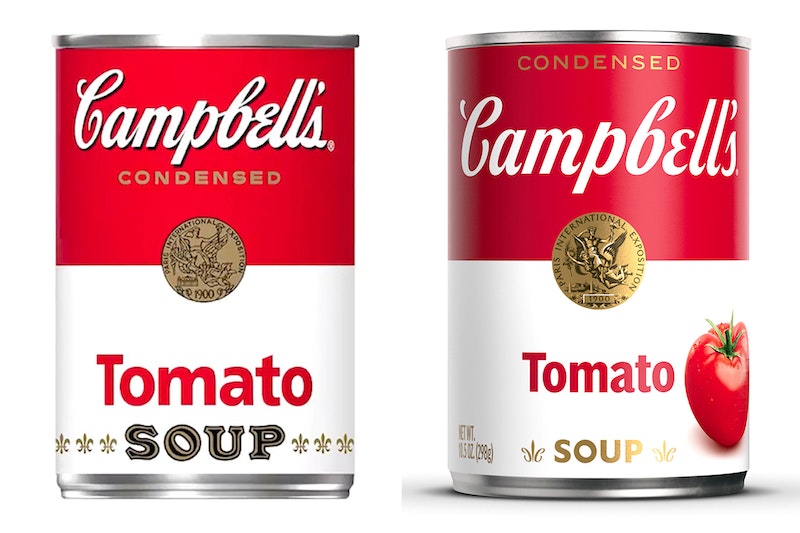 This last summer my daily efforts to seek out the new and exciting, like the delirium-inducing rendition of Hendrix’s, “Voodoo Child,” by Korean gayageum virtuoso Luna Lee, or the rediscovered and comforting, like David Swift’s 1963 romantic comedy and cinematic soufflé, Love Is A Ball, suffered a tiny but gutting blow. Campbell’s soup can labels, made famous by Andy Warhol, have been scrapped and replaced right under our masked noses. Too occupied to jet away to some faraway land to sniff out oddities in the markets of The Casbah or the backstreets of Paris, having a display of the iconic cans helped compensate my sometimes forlorn circumstances.

They endured as welcome avatars in place of actually owning, at last auction, an $11.8 million Warhol soup can painting. For decades I’ve kept a selection of the tiny masterpieces on a special shelf; ready to class up a grilled Velveeta or impress a weird, thus smoking hot, Pop-art savvy date. Few icons of contemporary art have functioned so, as default source of sustenance, and a way to achieve physical congress as simultaneously. This unanticipated extinction of my collection has left me hungry on so many levels. I don’t care to wallow in bitter outrages of such cultural and coital dissolutions but there is, I think, some value in reflecting on what you lose in order to risk what you may gain.

What marketing monster is responsible for this atrocity?  That would be Linda Lee, the philistine CMO of Campbells meals and beverages division. Outrageously as per conflicting reports of her claims to be a “Campbell’s Kid” hadn’t even had a bowl of the nectar until 2017. Lee joined the company two years later in December of 2019. If you were wondering what was going on behind the tsunami of sickness that’s Covid, wonder no more! As Zoom, TikTok, and other now ubiquitous warts on humanity were jammed down our throats Lee was quietly carrying out her fascist psyop on America’s cultural ace-in-the-hole that are Warhol’s soup cans.

The effort to compensate for an end to Warhol’s tiny but legendary, visual sleight-of-hand, has been considerable. Its modus operandi, seemingly inspired by the technique of a clueless, blathering child attempting to rationalize getting a Beyoncé tattoo on their ass cheek by overwhelming the parent with whiney outbursts of, “Just wanting to fit in” was never going to be stopped. The new label, which now includes an image of the main ingredient, “Has been adapted to the needs of today’s busy [culturally illiterate] consumers.” This dark, switch-a-roo is also supported by a suite of garish, “NFTs”, or “non fungible tokens” which are fancy IUOs in the shitty, vacuous world of cryptocurrency. Created by the artist Sophia Chang, God bless her, these digital atrocities are reminiscent of Donald Trump, sick from eating too much candy, doodling on an advertisement with a gold sharpie.

Canadian Campbell’s also did a lame, colorful, limited edition of the labels in French for the 60th anniversary of Warhol’s work to quell the foreseen outrage of the assumed sophisticated, unreasonable nature of their Quebecois population. These imposters, which will never be a suitable replacement in the sacred, ritual of placing a can of chicken noodle on Andy’s headstone, are now everywhere. Warhol’s paintings could be savored visually and, when warmed by the sun, if you placed your nose close enough to one of them, as I did in Chicago during the summer of 1989 at the Warhol retrospective at the Art Institute of Chicago, could also induce a rarefied high from aroma of fine pigments and acrylic vehicles in the paint. Sadly, the only smells arising from the NFT-themed rebrand are the acrid wisps of singed lithium wafting from the core of a warm laptop.

Great works of art, whether they’re in a gallery in the Louvre or someone’s garage, are marked by the reaction of each individual experiencing them. Art is not math. You can’t add up the integers of a painting and expect everyone to come up with a universal sum. Warhol was a genius in this way. A good way to measure the strength of a work of art, other than the last price at auction, is to review the number of reports of idiosyncratic experiences other people share in the comments sections of blog posts, articles, and videos. I recommend reading the articulations of these personal experiences of Warhol’s work and others that people have taken the time to make. You will always be surprised and your life made richer.

There’s nothing anyone can do. Perhaps it’s not as frustrating as the onset of race-baiting is for some of us or as arresting the unraveling of the Steele Dossier is for others but it’s still something to acknowledge. We’re all victims and should lower our heads as we pass the new, dumbed-down, display of this famous, family of soups as we waddle by in the grocery store. It’s something to collectively mourn. I recommend if you still have Campbell’s soups with the old labels; save them. Move them from your kitchen cupboards. Put them on a pedestal in the living rooms of your tiny flats and illuminate them with fancy, expensive, gallery spotlights and appreciate what Warhol did to make the world more fun.