One way to alienate your new gay friends is loudly announcing your enthusiasm for a Chick-Fil-A product at a Pride event. 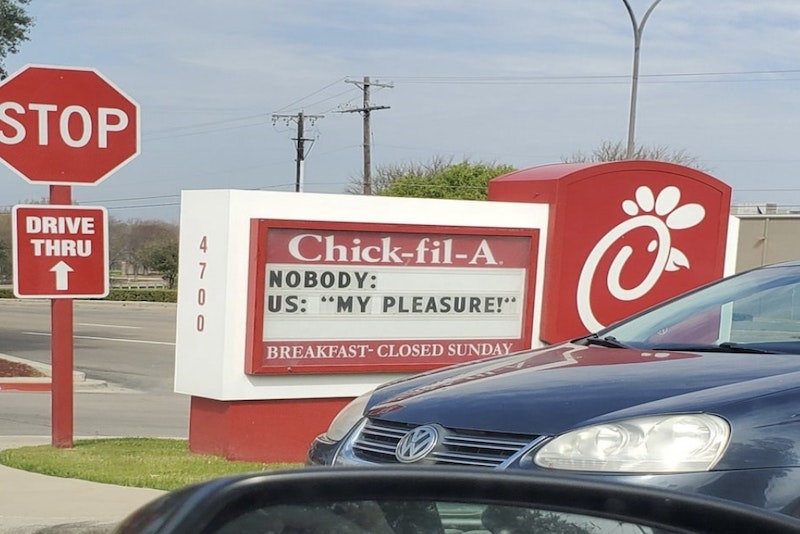 Since coming out in May, I haven’t been the most active member of the LGBTQIA+ community. I attended my first Pride parade in June and had a blast. I dealt with hate comments on my subsequent Instagram post, blocked, deleted, lost homophobic followers and “friends,” didn’t give a rat’s ass. Let’s part the Trumper Red Sea here; trash takes itself out.

I poured a Pride candle and sent the proceeds to the Delmarva Pride Center, my local group dedicated to education within the community with a goal of opening a center for supporting youth. Coming out isn’t easy anywhere, but particularly in our very conservative Republican area of Maryland; most libs are on the Western Shore of the state.

Recently I decided to attend a monthly social event of our local Pride chapter at Cult Classic Brewing on Kent Island that I’d been wanting to check out anyway; they have lots of fun events and activities. It was WINGO night which means you play Bingo and win free chicken wings in the rounds—who doesn’t love that? Well, the friend I went with who’s a Pescatarian, but hey, it’s just fun to hang out and play. I shared my Mango Jalapeño wings with the table for the round I won.

So it’s a good night and everything was going fine for me in baby-gay land getting to know some cool people. I’ve shied away from these types of public events as someone who came out over age 50 because I’m afraid I’ll feel a bit left out. If others in the community have been out for most of their lives I don’t know how they’ll feel about someone who as a married mother of four now all the sudden wants to join their ranks. Will they be welcoming or standoffish? I’ve received some mixed reactions, and after having a look at a few LGBTQIA+ dating sites decided they aren’t for me. Unfortunately I don’t live in a place where I’m able to be around many folks in the LGBTQIA+ family, hence my effort to reach out more, so most of what I’ve seen has been online. I get discouraged to learn of lesbians who don’t accept bisexual or transgender community members and worry what’ll happen if I encounter those attitudes in person because I believe in all-inclusiveness and acceptance for all.

Anyway back to WINGO. We’re sitting around the table, and just as I’m at an event where I’m trying to fit in and make new friends in the gay community, guess what the fuck I did? At our crowded table of LGBTQIA+ community members, I turn to my friend and in my typical loud, enthusiastic fashion say, “Hey on our way back can we stop at Chick-fil-A because I really want to get a Peppermint Chip milkshake! I haven’t had one yet all season and they’re my favorite!”

It was like you could hear the vinyl record-scratch as the sounds of a hundred people having fun screeched to a halt, the DJ stopped announcing numbers, the crickets entered stage left with their orchestra of chirping.

In case you aren't woke, there is a long history of Chick-fil-A being owned by a homophobic Jesus freak.

Supposedly over time the chain has chimed down their donations to anti-gay groups, and at least GLAAD managed to use the words “cautious optimism” (spoken like someone who misses their Spicy Chicken Deluxe) but let’s face it, you still can’t get Polynesian sauce on Sundays.

Back to the situation at hand, the table fell instantaneously silent and everyone was staring at me after I made the Peppermint Mint milkshake announcement. I think the Chick-fil-A ban is a pretty universal in the gay community and I might’ve just committed an oh-hell-no faux pas; no waffle-frying my way out of it. They’re coming for my freshly-minted gay card. I triple-blinked, giggled nervously, and did what I always do as someone with social anxiety when I’m nervous in social situations, which is talk way too much. I blabbed on about how I would normally never buy Chick-fil-A, fuck those homophobic pricks no matter how polite and friendly their staff consistently is, that I absolutely only think it’s okay to go there once a year for that one milkshake... Blink, blink, nervous smile.

Will I get cancelled by the gays over my holiday milkshake, served as it was in its earth-slaughtering Styrofoam? Not invited back to the reindeer games? I don’t know. I haven’t read the handbook to see how serious the charges and punishment are when it comes to Jesus Chicken violations. I’ll have to stick to flaming liberal Whopper juniors with cheese in the future and hope for the best.