When Tide Pods Eat Themselves 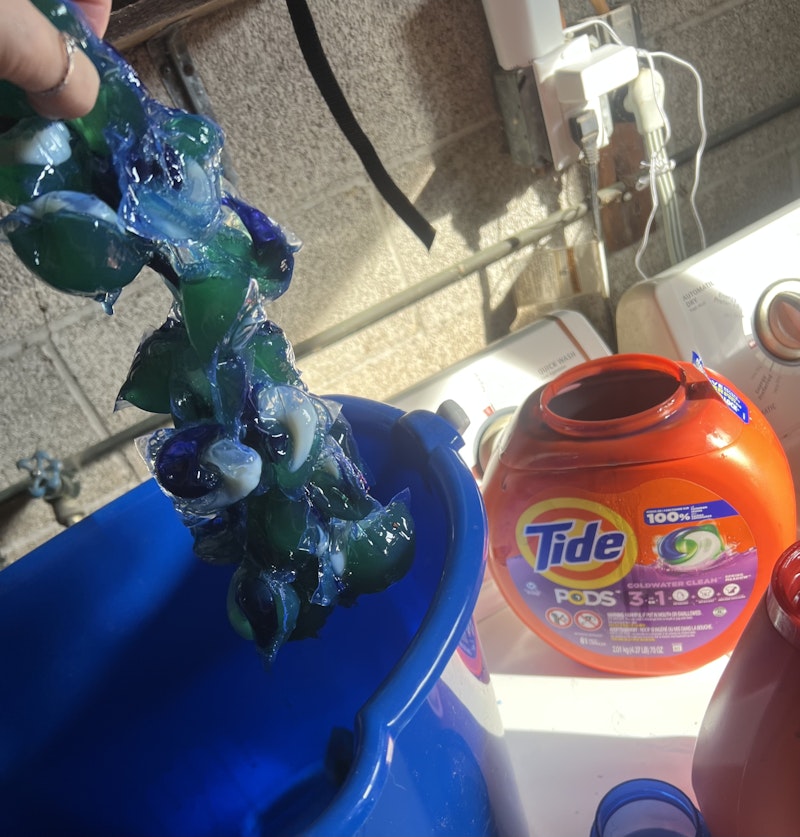 As a kid in the 1970s, laundry was simple. You put a cup of gross powdered, toxic-smelling, often clumped-together laundry detergent into the machine. There was a metal spout on the Tide box, and a plastic cup, so you never had to touch anything. Even though we didn’t have much money, we always had Tide detergent, because my mother insisted it was the only brand that worked to get the mud out from my brothers and I sliding down giant hills on flattened cardboard boxes and other apartment complex shenanigans.

Today, I still only buy Tide because, as I raised my own children, who were encouraged to also get muddy in the Chesapeake Bay swamplands of the Eastern Shore of Maryland, I learned that off-brand detergents don’t work for shit. Somewhere along the line, the “Tide Pod” entered the scene. I suppose it was a convenience, and mostly don’t mind it except when the machines shake the container onto the ground and I have to curse and chase them around the laundry floor like a boring-housewife Easter Egg hunt, but it becomes a problem when the stupid things encounter any minor inconvenience like temperature or moisture level changes. I’ve heard of kids eating Tide Pods, and don’t know what the fuck that’s all about, but come on, that’s just parenting… mamas, don’t let your daughters grow up to eat Tide Pods.

I’m not sure what happened, but somehow I guess some water got into the Tide bucket. When I’d reach in and get a pod, I’d feel this increasingly large gelatinous, gooey Tide Pod mothership. There was loose Tide liquid at the bottom of the container, so some of the pods were breaking. I don’t know what in the biological science project was going on—how the reproduction was occurring, but every time I would go to do laundry, things would get stickier and more disgusting. I’d have to wash the goo off my hands for ages each time I ran a load. I vowed to soon extract all the Pods and deal with the growing bacterial Pod-cast of characters, but as time went on, the mound simply grew until one day I was just out of loose pods so it was time for surgery.

I prepared the autopsy area with Dexter-like precision: a plastic container to hold the miscarried alien fetus of Tide Pods after this gory d&c delivery, sharp scissors, a bucket of water and towels. As I manipulated the monstrosity out of its plastic womb (it was so big it got stuck), several nearly-whole Tide Pods burst, and the thick, sticky blue goo oozed on my hands and wrist; hence the water bucket.