What about olive loaf? 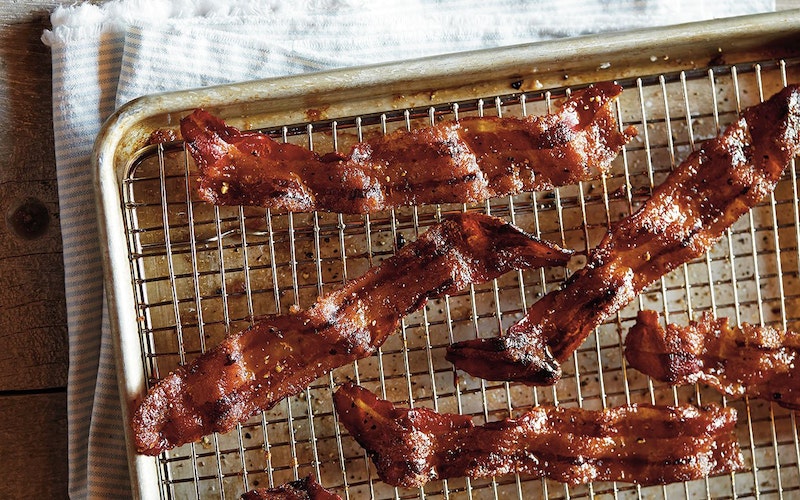 I get it: Americans like bacon (and if not, such an admission is an Internet infraction). And I got it nearly a decade ago when this really, really dumb bacon meme took off. Even today, when obligatory nods to current trends—sending “good thoughts,” for example, to the victims of some faraway natural or manmade disaster, and then, duty done, promptly moving on to excoriating Ben Carson or Bernie Sanders—have swallowed the media, this bacon baloney persists. It’s becoming the Donald Trump of won’t-fade-away resilience (and if it looks like the beefy Trump eats pounds of bacon, who’d be surprised?). I prefer pork chops—and don’t care if the pig was slaughtered here in Baltimore or in Chicago—but by chance, bacon became the lazy cry against the medical studies that are released nearly every week, often contradicting one another. I also eat bacon on occasion, mostly on sandwiches, but don’t wear it as a badge of rebellion. This isn’t self-righteousness on my part—the necessity of a flat tax and raising the age of retirement for Social Security recipients might fit—just a small fact.

Last Friday, in The Los Angeles Times, there was an especially noxious op-ed by Liesl Schillinger, a prolific writer, proudly pledging her allegiance to bacon. The headline, “If bacon is so bad, I don’t want to live,” was unlikely written by the author, but rather a time-clock copy editor in the emptying newsroom of that failing Tribune Co. newspaper. In the course of throwing cold water on the recent study by the World Health Organization, which linked promiscuous consumption of bacon, sausages, salami and other red meats to possible colorectal cancer, Schillinger sensibly ran through other food villains in the past several decades. Like eggs: just this year, yellow yolks, for decades considered an agent of high cholesterol, have been declared perfectly safe. I guess all those “white egg frittatas” will soon disappear from tony brunch joints, replaced by the formerly eyebrow-raising Eggs Benedict.

In 1992, when my wife was carrying our older son, her obstetrician told her to abstain from coffee for the duration of the pregnancy. Two years later, the same doctor, when queried about dietary restrictions, said coffee was fine, as well as the occasional glass of wine. That’s how fickle these inexact rules have become.

Back to the irritating bacon fetish. Schillinger’s opening paragraph: “Last week, I salivated as I beheld a photograph illustrating a newspaper article about the newest villain in the rogues’ gallery of foods suspected of colluding in human destruction. The photo showed a frieze of sizzling strips of bacon, caramelized crispy brown at their edges, striped russet and tawny gold down their curling lengths. I wished the picture had been scratch-and-sniff. Seeing it, I longed to fry up a mess of bacon on the spot (I sprinkle it with sugar as it sputters, which adds sweetness and crunch) and pile it atop an egg salad sandwich (made with Hellman’s mayonnaise, naturally).”

She then points to her 96-year-old grandmother who “has smoked (and eaten red meat) for as long as I can remember, and she is as hale as an ox… Americans who conscientiously seek to obey the continually shifting dietary dictates of the fear brigade need to ask themselves: Where does prudence end and joy-sapping paranoia begin?”

So Schillinger’s relation is the Keith Richards of grandmothers. Maybe, if she makes it to 100, Willard Scott will feature her on his dopey Today segment, and instead of the typical Kentuckian who’s lived so long “by keeping busy gardening” or “knitting,” Grandma will be the bad girl on the program.

Obviously, Schillinger is correct when arguing that the most acetic of Americans sometimes prematurely knock off—whether from cancer, stroke, heart attack, etc.—and that everyone will die from one cause or another. No argument here. I simply retch upon seeing yet another rhapsodic paean to bacon. At least she didn’t veer off topic by saying she’s a “chocoholic,” and just loves “sinfully rich” desserts that are her “guilty pleasure.”