When I Worked With Prince

Reflections on recording with the Purple One 21 years ago. 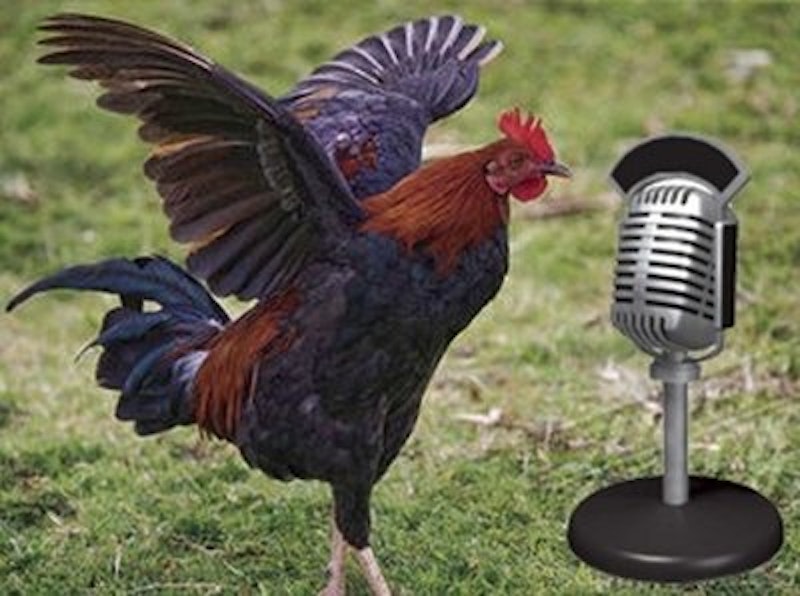 Even though it’s been years, I’m not sure I should be disclosing this. I have a family to protect, and still I fear the wrath of the Purple One. For a long week in the early-1990s, my barn was contracted by Paisley Park studios to record with Prince. One morning after a particularly hectic pecking session, Bishop Boston presented us with a fax that read, “NEED SOMETHING CRANKY & FUNKY. ARE YOU INTERESTED? STOP. Ƭ̵̬̊”

I assumed he was interested in having me play bass on a couple tracks—I used to be pretty prolific, you know. I played gigs. But my ego was quickly deflated by Prince’s specific requests. Bishop Boston fed us the details of a very short phone call with the engineer—they wanted to replace the hi-hat and layer the snare with our spur claws scraping a blanket of velcro. Prince also wanted us to (his words, not mine) “squawk” along with his guitar solo and harmonize with it. Although I chose to hold my tongue, his stereotypical notions of our kind offended me. Prince clearly knew nothing about roosters or our rich musical history. My uncle Albert can be heard at the very beginning and the outro of “Good Morning, Good Morning” by The Beatles. Family lore goes that John Lennon was very accommodating and understanding of Albert, even if all he wanted was a couple rooster calls. Lennon made Albert tea and inconspicuously added a drop of “clear honey” that came out of a thin glass vial. Albert always ended the story there, but all the Quibbits knew why he came back with his feathers’ tie-dyed.

Everyone else in our coup jumped at Prince’s offer and eagerly acquiesced to his ever-changing ideas. Monica and I were trepidatious, but we figured ought to honor the family legacy and leave a scratch on a world that hardly ever respects or honors our bodies, let alone our creative abilities. With only a dozen of us in the back of Bishop Boston’s truck, the drive to Minneapolis went smoothly, with plenty of room for pecking and squawk talk. Without velcro, we practiced scraping on a patch of astroturf, singing along to our own songs—old standards like “Frightened & Flightless,” “Bliss of the Barnyard,” “Court Her with Corn,” “The Yellow-Hackled Bandit,” and “Cruel Coup Blues.” Naturally, my cousin Bennington had to get political with “For Those Who Fell in the Slaughterhouse,” but we all called for him to stop being such a downer. We were about to make history. Uncle Albert had passed away suddenly only six months before, and I was determined to honor his legacy and pay my dues to the Quibbits clan.

We arrived at Paisley Park close to two in the morning, ready to rest, but the Purple One had waited for us long enough and wanted to start the session immediately. All of us discreetly pecked at the cocoa leaves we’d smuggled and were promptly perky and ready to peck. The engineer brought us into Studio B and corralled us rather roughly onto an enormous velcro carpet. We started to practice clawing in time, but a small voice came over the intercom—“Quiet please.” It was him. We all turned toward the glass and saw Prince silhouetted behind the soundboard, adjusting various faders and equalizers. A hush came over us as we awaited further instruction. The intercom squeaked and Prince spoke again—“We’re going to do the guitar solo first. Just do what feels right. Keep it sexy. Key of F. Take one.” Prince pushed play in the middle of the song, just a few bars before the solo. I felt a bit of a cocoa-induced panic, not knowing where to come in or what note the solo started on. Of course, Bennington nailed the first B-flat blind, and squawked his histrionics as the rest of us struggled to keep up. Seven bars in, the tape stopped, and the intercom squeaked again—“Nice start but more feeling. Y'all are too hesitant, let the spirit electric guide you. From bar 4, take two.”

Seventy-two takes were attempted that night, and by the time Prince was satisfied and ready to move on, it was nearly dawn. We were allowed a quick pecking break, and outside, as the morning sun rose over winter’s bare trees, we heard the call of our Minnesotan brothers echo and refract over the country. I’ll never forget that moment—at wit’s end, I was moved to tears by the call of our kind, grateful to hear their song and knowing that they, too, were free. My coup stood in solemn respect, though we were quickly startled out of our silent prayer by another engineer calling us back in. The first engineer had collapsed into a purple couch in the control room, but the Purple One remained poised in perfect posture behind the board. With his arms crossed, he called to us through the glass, sans intercom, and did his best to explain what he wanted. None of us (except Bennington… ugh) were classically trained, and most of Prince’s instructions went through one ear and out the other. I turned to Monica, panicking again, asking if she caught any of that. “He erased the drums—he wants us to recreate them.” I almost passed out! But more cocoa was passed around, and I felt ready for anything. Without conferring or asking for clarification, the intercom bleated “HIT IT!” and Bennington pecked out a stirring intro fill, and the rest of us followed his lead, feeling loose and getting creative with our moves, barely keeping time. But after 72 takes, the song was in our bones.

It took just six full passes before Prince was satisfied, and he curtly informed us that our work was done and that we needed to leave immediately. We wandered around in a daze before Bishop Boston was yanked from a deep sleep by the Purple One repeatedly poking him in the face and yelling directly into his ear, “WAKE UP FARMER! WAKE UP FARMER! WAKE UP FARMER! I DON’T NEED YOUR ROOSTERS ANYMORE! WAKE UP! FARMER WAKE UP! I NEED TO BRING IN THE GEESE!” Too tired to register this slight, Bishop Boston rubbed his eyes and guided us out the door and down the dirt road back to the truck. Prince watched us leave, arms crossed, but once we were out of earshot, Bishop Boston turned to us and said, “I’m sorry, guys. I hope that was worth it. I didn’t exactly know what we were getting into. I hope you don’t feel used.” I didn’t feel much of anything at that point, and as soon as we got into our carriage, I conked out, and slept the whole way home, and another day after that. We were all beat, but it was a peaceful weariness from hours and hours of work.

As the next year went on, I held my hopes low, expecting the song to be canned or mixed without our contributions. The whole coup was pleasantly surprised when the standalone single “Verily I Feather U” was released. He kept everything—the track was kind of a mess, to be honest. But Bishop Boston received a box of hundreds of copies on the day it came out—cassettes, CD’s, 45s. The cover was risqué even for Prince—a marbled outline of a very curvy, naked woman with two small feathers covering her breasts. Tipper Gore flipped, and Warner Brothers caved, recalling all copies. Prince started writing “SLAVE” on his face at his concerts, and all the press surrounding his unique name change overshadowed any music of his for the rest of the decade. “Verily I Feather U” was never re-pressed, though apparently Prince played the song live for the first time at his concert for Baltimore this past May, sampling our decades’ old work. Copies of the original single go for thousands of dollars on eBay to this day, and naturally Bennington just dropped his off at the local second-hand store, trying to curry favor. Monica and I are sitting on ours to this day, eager to show our chicks and new friends. I know my uncle Albert would be proud.