When Baltimore Was a Clothing Powerhouse 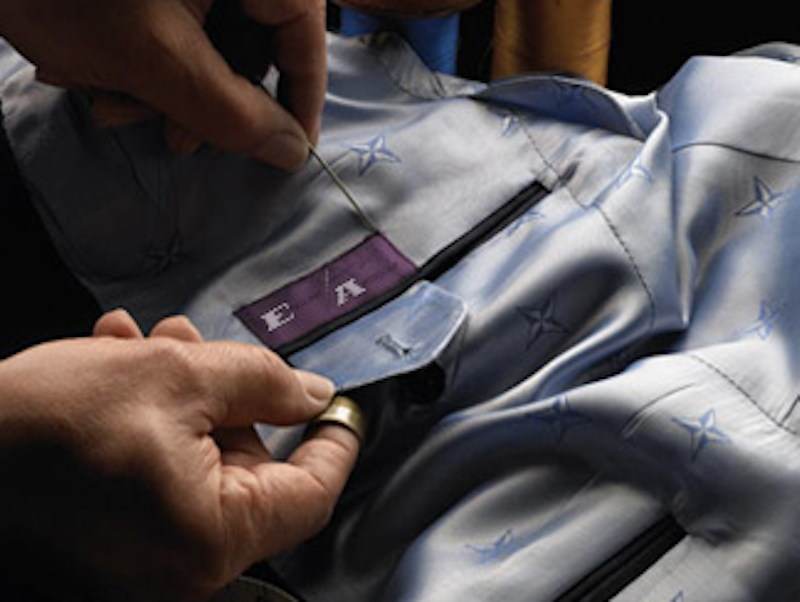 Clotheshorses and wannabe Beau Brummells can probably recall when Baltimore, head-to-thread, was the second largest clothing manufacturing center in America after New York. And political hobbyists can chuckle over knowing that in Maryland clothes not only make the man but a few fine suits can also influence politicians and policy.

Many of Baltimore’s purveyors of fine English tailoring were Eastern European Jews. At its apogee, the men’s clothing industry boasted a half dozen or more top suit manufacturers—Oakloom, Lebow, Jos. A. Bank, Hass, Schoneman, English American and Stetson-Dee—many of them clustered in the huge loft buildings that were demolished to accommodate downtown’s Convention Center in an area that was then known as Hopkins Place.

Now there is only one remaining, English American. Jos. A. Bank was recently subsumed by Men’s Warehouse in a stock buyout. Men’s Warehouse is headquartered in Houston, though it says it will retain the Bank brand. Hass and Lebow were earlier absorbed by English-American as were other labels from low-end to Oxxford, the priciest American-made off-the-rack suit.

Jos. A. Bank has outfitted platoons of rising look-alike stockbrokers, attorneys and other young professionals who wore the conservative (when it was called “Ivy League” or tweedy and years later preppy) look on the way up the ladder. Many graduated to haughtier labels such as Lauren, Zegna and Brooks Brothers as paychecks improved and social status advanced. But a cautionary note from a clothes-snot to the women at The Sun who write about the business of men’s clothing: Any shop that advertises three suits for $199 should not be characterized as “upscale.”

Among Jos. A. Banks’ most celebrated customers was Gen. Alexander Haig, White House chief of staff under Presidents Richard M. Nixon and Gerald R. Ford and secretary of state under President Ronald Reagan. Haig was often toasted as an elegantly haberdashed power behind the throne whose profile and portrait appeared in fashion magazines as testimony to his sense of style. By his own word, Haig visited his brother, a professor at Loyola University, frequently with time set aside for visits to Jos. A. Bank to augment his expansive wardrobe.

A candidate’s new clothes were often an investment by a patron. You can be certain that when political major domo Irv Kovens had a favored candidate or a cause he didn’t call the State House chaplain. He summoned his tailor.

During Spiro T. Agnew’s haughty Chivas Regal days as governor and vice president, he accepted many tributes but none more revealing than his wardrobe. Tall, drill sergeant-erect and with salt-and-pepper hair slicked back over his bullet-shaped head, Agnew was considered among the nation’s best-dressed governors. His mansion closet was lined with made-to-measure suits of smooth silken fabric, two-button, single-breasted in the style of the moment, tailored by Stetson-Dee and underwritten by Kovens.

And sifting through the cobwebs of 40 or more years, fur coats changed hands in a New York hotel suite and wound up in the wardrobe of Maryland’s First Lady Judy Agnew, though this exchange was courtesy of one of Agnew’s co-conspirators and not Kovens.

When Marvin Mandel was elected governor to succeed the departing Agnew, among the first congratulatory gifts to arrive was Kovens’ personal tailor, Herbie Alper. Equipped with a tape measure and a selection of swatches, Alper draped Mandel in bolts of muted plaids and subtle stripes, sharkskins, serges and the obligatory tuxedos, 10 suits in all for the first order, with more to come, enough news threads for a proper coming-out of Maryland’s new governor. Years later, at Mandel’s trial, it would be revealed that the suits had been disguised in Kovens’ ledgers as guard’s uniforms for the security force at Kovens’ Charlestown Race Track.

On a slow afternoon some years later, Mandel said, “Let’s drive up to Baltimore and get some suits.” At Stetson-Dee, the tape measures and swatches were waiting at about the time when polyester was making its grand debut in the wonderful world of double-knits, circa the 1970s. Mandel’s take, a half-dozen suits, mine five, at a time when a made-to-measure suit in Baltimore cost about $60 at the manufacturer’s price.

At a meeting in Kovens’ office at his West Baltimore emporium after I’d left government, Kovens made reference to the suits he had once bought for me. “What the hell are you talking about, Irv, you never bought me any suits,” I said. Kovens referred to the suits I’d had made at Stetson-Dee. “Irv, your buddy double-dipped you, and I have the cancelled check to prove it.” A few days later I returned to Kovens’ office and presented the check. When the bill for Mandel’s suits had arrived on Kovens’ desk, the conniving tailor had included mine as well.

Kovens, a wealthy entrepreneur, wrapped himself in the gaudy tic-tac-toe plaids of the era, cuffless and flared, and with lapels the wingspread of a B-52 bomber, many of the suits purchased out-of-state at a high-fashion chain called Couzens, with outposts in Miami, Bal Harbour, Las Vegas and San Francisco.

Kovens was also patron and political godfather to William Donald Schaefer. It cannot be documented that Kovens ever provided Schaefer with tailoring services. And it’s probably just as well because Schaefer’s kitschy wardrobe looked as if it fell off the back of a Goodwill Industries truck. It can be verified, however, that Kovens did supply Schaefer with television sets and other accoutrements, as requested, for his offices at City Hall and the State House.

Gov. Harry R. Hughes was an Ivy Leaguer right to the button-down shirts. When Hughes assumed the office, his friend and fundraiser, William Boucher, executive director of the Greater Baltimore Committee, tapped his businessmen buddies and set up a $50,000 slush fund to cover Hughes’ political activities and other needs.

And when Hughes passed the baton to Schaefer in 1987, the new emperor screamed that Hughes and his wife Patricia had depleted the Governor’s Mansion household account of nearly $7000 before Hughes left office to have their wardrobes altered to accommodate their new sizes. The transaction was confirmed at the time by release of the receipts and by word of the tailor, and elderly Greek woman from Annapolis.

Louis L. Goldstein’s favorite tailoring shop was Oakloom, which was originally a neighbor of Jos. A. Bank on Hopkins Place but relocated to an industrial building in South Baltimore that also housed the Maryland Workshop for the Blind. An Oakloom co-owner once worked in Goldstein’s comptroller’s office. Another of Oakloom’s prodigious customers was the sartorially splendid Nathan Landow, former chairman of the Maryland Democratic Party.

Oakloom was among the finest of Baltimore’s men’s clothing manufacturers. They tailored the private-label suits for Paul Stuart in New York, and couple of fine men’s outfitters in San Francisco and were the franchisee for Nick Hilton suits. Oakloom also had a custom tailoring division.

John McGuire, a former delegate and Circuit Court judge in Baltimore County, used to boast that he wore only Nick Hilton suits that he bought at the Canterbury Shop on North Charles St. Maybe McGuire didn’t know that they were manufactured in South Baltimore and he could have gotten them half price at the source.

Back in the bodacious 1960s, when I was a political reporter for The News American (yes, this was once a three-daily-newspaper town), George P. Mahoney, the millionaire paving contractor and perennial candidate, had been hectoring me to join his 1966 campaign for governor as press secretary. “Come to work for me and I’ll put a decent suit of clothes on your back,” Mahoney said.

And at around the same period, the political panjandrum of the day, Jack Pollack, had been pestering me to have lunch. Finally I agreed to meet him in the dining room of the long-gone Emerson Hotel on Calvert St., which doubled as Democratic party headquarters and political hangout. We were seated at a corner table for two next to a potted palm. I assumed the palm tree had ears as Pollack was known for having a fondness for electronic eavesdropping devices.

Toward the end of lunch, Pollack pulled a wad of $20 bills from his shirt pocket and slid it across the table: “Here, buy yourself a couple of suits.”

“Buy yourself a couple of suits, no questions asked,” Pollack insisted.

“Jack, if you don’t put that back in your pocket I’m going back to the paper and I’m going to write a story that you tried to bribe a reporter.”

Jack turned red and retrieved the wad. I hoped the potted palm was listening. On the way out of the hotel, we came face to face with the publisher of The News American: “Jack, I’d like you to meet Mark Collins, my boss. I think I’ll walk back to the paper with him.”

—Frank A. DeFilippo was press secretary to Gov. Marvin Mandel from 1969-77.