Not Jaded by the Homeless

Seeing people who live on the street still breaks my heart. 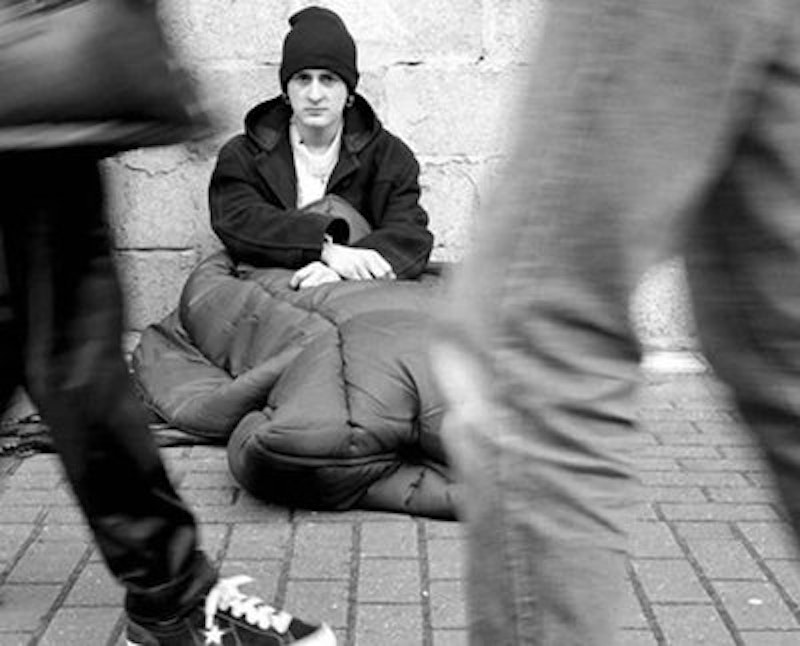 Tucked away in the suburbs of Philadelphia, I didn't go into the city enough to have seen homeless people during my childhood. I don’t remember ever seeing a homeless person where I grew up in King of Prussia (practically the birthplace of American sprawl and home of the nation’s largest shopping mall). I’ve never lived in a major city, so I really haven’t experienced firsthand this bleak reality. I wonder if people who see homeless people every day are jaded: if they somehow find a way to see them but not see them.

About once a month I travel from my relatively sheltered life on Maryland's Eastern Shore across the Chesapeake Bay to Baltimore, home to this website you’re reading. On the way to a nice part of the city where the office is, I drive on Martin Luther King Jr. Boulevard, and I can tell you that this is sadly not the dream he had in mind.

The overpass areas are established homeless sleeping areas: there are dirty mattresses, piles of clothes and blankets; occasionally a head can be seen sleeping amongst the debris. There are stoplights all along the boulevard, and many of the homeless people walk between the cars, begging. If I lived in Baltimore, I couldn’t take this road to and from work every day, because I couldn’t afford it. If a homeless person comes up to my window, I always give what I can spare. I never carry cash but if I’m driving to Baltimore I try to remember to stop at the ATM to get $20 to cover the $6 Chesapeake Bay Bridge toll on the way home and something to eat. I never quite remember to keep a bunch of $1 bills in the car at least to give to people who might come by my window.

You never know which lane of traffic the homeless people will approach from: they could come from either side and they only have a traffic light’s time to approach cars. I neither seek nor avoid them; fate decides. There is no racial or age commonality among the homeless people who approach the car windows. It could be an older white woman in a wheelchair, a Latina man with a baby on his hip, an African-American woman holding out a baseball hat. The other day, it was a blond kid with a backpack; he was maybe 19 years old, the age of my oldest child. Seeing him brought tears to my eyes. He had a sign that read “Homeless and Hungry” and I apologized to him that I only had a dollar bill to give him. I’d forgotten to go to the ATM and had scrounged together a total of $7 in my purse and car change. I figured I could give the toll operator the quarters.

I don’t understand it when I hear people talk about homeless people in an annoyed manner, bringing up politics or blaming the person. “Probably on meth,” I’ve heard people mumble, or “They’ll just spend the money on booze.” Really? They’ll just spend the money on booze? Well, guess what, asshole. That’s what I’d fucking do if I was homeless, too. Because that’s gotta be pretty depressing to not have a home, so what the fuck else are they supposed to do with the money they spend all day collecting?

I cursed myself for not having given the kid my whole $7. He is someone’s son, I thought. I could’ve stopped at the ATM for another $20 before I got to the bridge. And he couldn’t do that. I looked at my car dashboard, which informed me it was 32 degrees outside, practically spring compared to the bitter cold weather we’ve had in Maryland for months. The sun was out, and at one stoplight near the Ravens stadium there was a man lying on an old mattress. Covered in blankets, he was wearing a Ravens hat and reading a paperback book. I wondered what book it was.