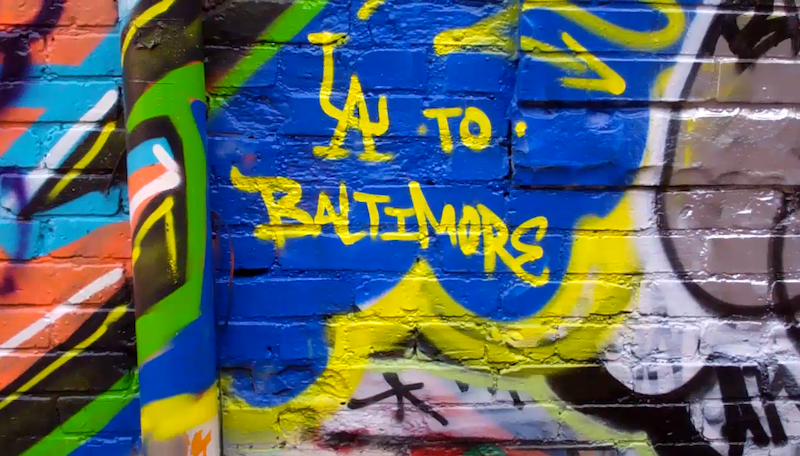 Welcome to Splice Today's new, intermittent underground Baltimore rap column, where hip-hop heads Raymond Cummings and Nicky Smith get intimate with mixtapes so fantastically obscure that Google searches will return nary a whisper. Are you spitting hot 16s into your collar while waiting for the cross-city bus or rhyming absent-mindedly while waiting for a conference call to start? We will know, and we will write about it, and you will envy us.

RAYMOND CUMMINGS: Something I can't get enough of—or rep enough, no matter how hard I try—are the mixtapes emerging from Baltimore's fledging "grill" scene. Have you tapped into any of that? What's been getting burn in your world, Nicky?

NICKY SMITH: Ray, we're all well aware—or should be—of the grill scene's problems lately. The Baltimore Police Department certainly is. Nearly every party or show staged by the Fuck-Boy Collective has been busted prematurely or infiltrated by NARCs. So there's been a huge influx of newly recorded material in the past couple of weeks as a result of the ever-reddening, all-seeing eye. And I have to be honest: that sizzling sound of the grill scene doesn't translate so well in a dark, damp, dank, strobed-out basement or deep in the bowels of the Copycat.

NS: His work is best appreciated one-on-one, I think. The most exciting piece of music I've encountered since Hit-Clips is the new mixtape from Actual Regarded Man. It's called I Only Eat Garlic Bread. ARM, as he's known around here, is a true outsider—so much on the outside that no one seems to even know where he came from. But his work is astounding, and untainted by excessive drink, drugs, or leisure. Lil B isn't a touch bizarre, comparatively.

My favorite tune so far is "Howard Hughes Was Right." What the hell could this mean? "I have reasons, intentions/Aviation/Intimation/Urination." Keep in mind, his nasally, ominous voice is under-laid by a rotating constellation of classic hip-hop sounds from all eras—808s, soul samples, trap high-hats, a few brostep wobbles—but if they're not being used sarcastically, ARM is certainly aware of the semiotics of his music, and that's more than I can say for anyone else in the grill scene, who, thus far, have sizzled further and further into obscurity. Compared to the beguiling brilliance of Actual Regarded Man, can you blame them?

RC: I can't, Nicky; I can't blame them. Also, did you know that ?uestlove has a "Howard Hughes Was Right" ringtone on his iPhone? He tweeted about it the other day.

By the way, how did they get that sizzling sound? It's all over these tapes; it's distracting, kinda played out. We're now living in a world where any amateur grillmaster on The Alameda can fancy himself a bedroom tastemaker. It's lame. Do you ever just get tired of all the mixtapes, all the product? There should be an international underground rap week of silence where everyone sits on their rhymes and beats and just vibes on the ambient music of absence.

RC: Here's the second tape we need to discuss: Young Adverb, The Carlton. This may be the first mixtape I've encountered devoted entirely, and almost indignantly, to clowning "The Carlton," a sort of anti-dance popularized on the Fresh Prince of Bel-Air television series.

NS: "Indignant" is the key word, definitely. These rappers are trapped in a junk culture, trying to express themselves as best they can, but all they have are the ineffable beauties and tragedies of life, references cribbed from “Nick at Nite” and easily-mocked celebrities. But Young Adverb is playing along, checking signifiers, ciphers, punching in his time card, so to speak, making music because it's what he's always done, but it's rather joyless and certainly not anything close to sincere.

Going back to something you touched on earlier, I think we all need to take more than a week to reflect—more like a year, or five, where no one creates anything. Of course nothing like that could ever be possible, but imagine how reinvigorating it would be. Music needs to mean something, sonically, lyrically, or both. This constant churn feels lifeless and self-defeating, almost.

RC: Yeah, I hear that, on both fronts. But we're just yodeling into the abyss, my ninja. There are some deficiencies in The Carlton's production, too. January's "Poppin' Fresh" tape was helmed by Clayton Mystique, a Canadian rising star with a penchant for bizarre noise samples and British Invasion 3.0 consonant grabs; he laced Adverb with beats so fucking strange and unique that Kanye should've nabbed him for his Yeezus Manhattan Project-esque sessions. There was a mad magic there, a mind meld of Prodigy/Alchemist or even Action Bronson/Party Supplies proportions.

But Mystique must have been too busy shopping for $1000 artisanal scarves in Leningrad, because for The Carlton something called The Association is behind the boards, banging out lame Heatmakerz knockoffs that don't suit Adverb, like, at all. Their shit is too high-BPM and distinct, too precise, and the whole thing winds up coming off as wrongheaded and uncomfortable, like if you threw a house party and invited two sets of friends who you knew wouldn't get a long just because you were depressed and wanted to be a dick.

Adverb's usual "adjective noun VERB" ad libs feel so limp and sad, given the context, sorta like when DMX fell off and his producers outgrew him but you'd still hear those canned barks on weak new shit, like he was trying to will the glory years forward. Has Adverb even had a golden age yet? Did he ever officially drop an actual album? You're more of a fan than I am, Nicky.

NS: Honestly, I think Adverb peaked a long time ago, at least four months back, at a warehouse party here. There were about three minutes of total, beautiful performer audience unity before he bizarrely trotted out The Carlton's title track as, like, the second song. You started to see people look around at each other with confused, pained, uncomfortable faces as Adverb cranked out anonymous song after song of precisely crafted. And here is where I'd say, "pop gold," but whatever The Association is trying to do with Adverb sounds like piss and mayonnaise.

What followed was a bizarre mesh of out-of-place air horns and machine gun hi-hats, songs that attempted to mash a variety of popular and standard song forms with the trappings (no pun intended) of more mainstream rap, verging on pop, aspiring to something bigger than that room and fucking up the batch bad. You could feel the air leave the room before the people themselves started filing out. Imagine the slow drain of enthusiasm that Lil Wayne experienced circa 2009-2011, but within the span of a few months. Our memetic and phenomenal behavior is becoming more micro and macrobiotic every year: raw and real as fuck, but witnessed by a precious few, who forget whatever revelations they had in an instant.

RC: Does this mean that Young Adverb's career is a "micro-meme" of sorts? Or is he on some sub-textural, next-level tear that we won't fully grasp until 2017?

NS: Hmmm. Young Adverb has reached the end of act one of his brand narrative. Who knows what's next? If his people even have anything planned? Anyone can play guitar—ask Lil Wayne, if he's still conscious for comment. For now, I'm moving on.

NS: The last mixtape to really catch my attention was guttercandy progenitor Zevius' 303-song Christmas Eve dump The Exegesis Of… It's closer to the scary and obsessive attention to detail of Aphex Twin than most of his peers' work. Zevius is an uncultivated recluse, a non-human entity of pure creativity who operates at twice the speed of a normal human, and five times the rate of a normal artist. He’s been described by the few people outside of his circle as "insect-like" and "supernatural." His voice is rarely recognizable, though Zevius' wizardry is in creating sounds that mimic human vocal noises - simply out-of-tone shaping. At this point, he remains an artist's artist, and easily the most sampled producer in the underground scene.

An interview with Zevius would be a holy grail: much social media play guaranteed!

RC: Don't say that, Nicky; be careful. Haven't we learned anything from the tragedy of Swayze? On another note: has anyone ever seen Zevius and Gucci Mane in the same room together? Honestly, for real, I haven't had the heart to spend any time with Exegesis yet. Maybe when I'm planning my next overdose.

—Raymond Cummings is the author of several books of poetry, including Crucial Sprawl, Seven New Poems, and Assembling the Lord. He infrequently blogs at http://voguingtodanzig.blogspot.com/