When federal stimulus money dried up, the state of Maryland, among the others, was forced to retrench and cut back on spending in order to balance its budget as required by law. 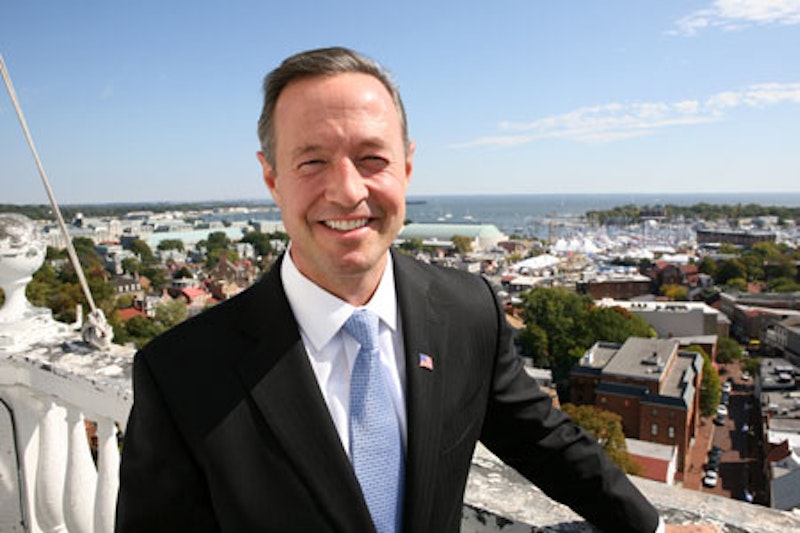 Financial woes flow downhill. When the federal government has money problems, it prints or borrows money and runs up deficits and debts. When state governments feel the pinch, they cut services or raise taxes and fees or adopt a combination of all of the above. And when city governments scramble for funds, they close recreation centers, swimming pools, libraries and charge for bulk trash pickups. The government closest to the people always inflicts the direct punishment on those it governs.

When federal stimulus money dried up, the state of Maryland, among the others, was forced to retrench and cut back on spending in order to balance its budget as required by law. Gov. Martin O’Malley (D) presented a budget that was based on cuts in education funding and aid to local governments but contained no new taxes. But, he said, he wouldn’t object if the General Assembly added a few new revenues on its own. The legislature has done exactly that, hiking a variety of fees (not taxes, mind you) that will restore funds to education and local governments by charging more to drink, drive (not at the same time), belong to the state pension system and to take medication if you’re in the state health care plan. And now the state is considering raising bus and train fares as well as tolls to satisfy bond holders at the same time that it expands free transit rides to state employees as a fringe benefit.

Much of the education money will go to Baltimore City and Prince George’s County, which have the neediest schools. This in itself is an audacious twist because Prince George’s has a property tax cap and relies on the state and, in effect, taxpayers in the other subdivisions, to put up the money that it won’t raise for itself by increasing taxes. Prince George’s has a $64 million budget surplus. And Baltimore City, with double the property tax rate of any other subdivision, once again finds itself holding the sticky end of the lollypop with a $65 million budget shortfall. To make up the difference, Mayor Stephanie Rawlings-Blake plans to cut her own office budget, as well shorten library hours, cut after-school programs and animal services and charge for bulk trash pickups. The people who pay the least need government services the most.

It is part mythology and part convenient phraseology to say that the federal government simply prints more money when it runs short, a favorite palaver of conservatives. But it’s close to the truth. What really happens is that the Federal Reserve buys up huge blocs of government bonds. And again, contrary to myth, the Fed—not China—is the single largest holder of U.S. debt. China holds about seven percent of America’s $14 trillion debt, followed by Japan and Great Britain. The Obama Administration and Congress are negotiating a series of budget cuts to prevent the government from shutting down. Originally the Republicans, prodded by the 85 new members in the House, had focused on cutting social programs such as WIC, health care and Planned Parenthood but Democrats raised a ruckus and resisted punishing those who can least afford to be hurt. About 80 percent of the federal budget is dedicated to Social Security, Medicare and defense spending. The remaining 20 percent covers all the rest, including discretionary spending.

The states, at least most of them, unlike the federal government, require balanced budgets. In Maryland, the requirement was sustained largely by myth until the early 1970s when a constitutional amendment was adopted and the balanced budget was codified. Until then, Maryland relied largely on the executive budget system, the strongest in the nation, that was adopted in 1917 after the General Assembly spent the state into bankruptcy. Part of the O’Malley/General Assembly strategy is to erase the chronic $1.6 billion structural deficit that plagues Maryland. The deficit began under former Gov. Parris Glendening (D) who signed the Thornton education aid bill without having a funding source and who awarded himself a cut in the income tax rate as an election year gift even though nobody was clamoring for it. But even after the budget shell game is over, only about half of the $1.6 billion will be wiped out. And that will be accomplished, in part, by sucking out money from the increased pension contributions by state workers and teachers that is supposed to prop up the pension fund but will be used instead for general fund spending in the operating budget.

Baltimore City has no such luxury. Its taxing powers are limited in one way or another to the property tax, tinkering with the piggyback tax rate and a variety of nuisance taxes, already at their tolerable limits. One-third of the city’s residents pay all of their taxes, one-third pay some taxes and the remaining third pays no taxes. Basically, six haute Zip Codes—Guilford, Homeland, Roland Park, Mount Washington, Federal Hill and Canton/Fells Point—support the entire city. So when crunch time comes, the quality of life ingredients in the city are the first to be cut—the 311 call center, graffiti removal, tree maintenance as well as those already mentioned.

State transportation funds for city road maintenance and repair have not been forthcoming. Under the formula, the city is supposed to receive 25 percent of the transportation money that the state collects for maintenance of city roads and streets. Most roads in the counties are maintained by the state because they are state roads. But the state has been raiding the transportation fund to support the general operating budget, which is $14 billion and change out of a total budget of $34 billion. The remaining $20 billion is federal and special funds. And when William Donald Schaefer became governor in 1987 he sponsored a budget amendment that allows the city to use state transportation funds to balance the city’s budget. The state has also been selling bonds and using the proceeds for operating funds instead of construction money. The state has just about reached its bonding limit and at some point soon will have to raise its share of the property tax to meet its bonded obligations. The state property tax rate is set every May.

The intricate roundelay of government finance and aid is an object lesson in interdependence. When one level hurts the others suffer. And right now the pain is being distributed, perhaps not evenly, right down to the last pot-holed city street in a kind of reverse Ponzi scheme. There was a time when the city went on a selling binge to bail itself out. It sold many of its assets to the state for hard cash because it could no longer afford to maintain them—Friendship Airport (now BWI-Thurgood Marshall), the city’s bus system, City Hospitals and later the Baltimore Zoo. Right now, there’s not much left to sell and no one around to buy. Everybody’s broke.