It's all about the pitching: Arrieta, Tillman, Matusz and Britton. 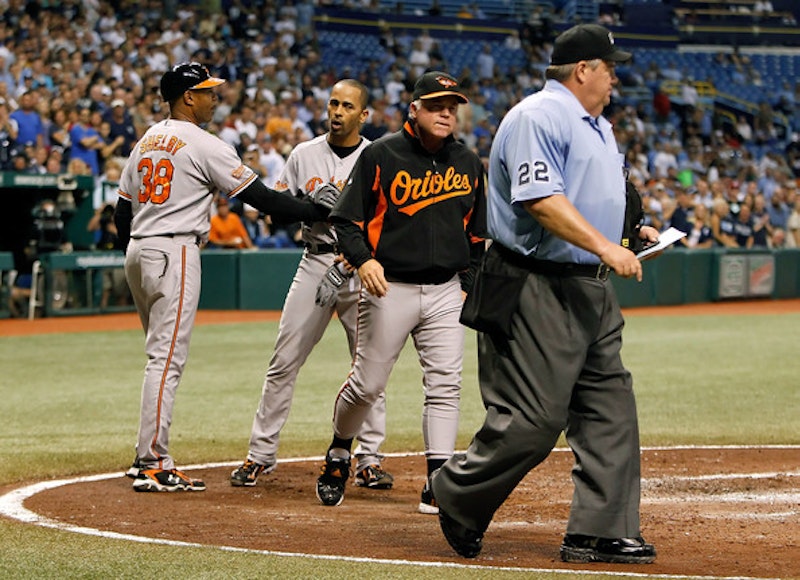 As the Baltimore Orioles set to break camp with their revamped lineup and brash talking manager Buck Showalter there is a renewed optimism surrounding the club. I’ve already predicted a 78-win season, which would be a 14-game improvement over last season's abysmal record. Some national writers have even predicted the O's to crack .500 for the first time in 13 long years.

Regardless of the Orioles final 2011 record this year's team certainly figures to be more entertaining and competitive than the bush league lineups of recent vintage. Showalter has not only brought credibility to the clubhouse, but his recent comments in Men’s Journal about AL East icons Derek Jeter and Theo Epstein add a little piss and vinegar to the mix. Showalter isn't backing down from the big boys. Some people may question the tactic of taking some pot shots at your competition, but the O's have been a doormat for Boston and New York for so long that the players and many fans have become almost deferential to them. Former manager Dave Trembley never stood up for his players when it came to dealing with New York and Boston. He gave impotent responses exalting the greatness of his opponents. Much Like Rex Ryan, Showalter isn't here to kiss anyone's rings.

Of course, if Showalter intends to win a ring of his own it will not come from the veteran hitters added this offseason, but from the continued development of a talented group of young pitchers. Jake Arrieta has the look of an innings-eating mid-rotation bulldog. Brad Bergesen has shown flashes of brilliance but ultimately looks like he'll settle into the back end of the rotation. Chris Tillman is young and has the minor league stats to back up the hype but his performance so far in the big leagues has been lackluster. That brings us to lefties Brian Matusz and Zach Britton.

Matusz, who recently turned 24, is coming off a stellar second half to the 2010 season. He went 7-1 down the stretch with an ERA in the mid 2.00s. He's been named on sleeper lists for numerous fantasy baseball sites. If any member of the Orioles current rotation has the chance to be an ace then Matusz is probably the guy. If he can pick up where he left off last season he gives the O's a chance to beat any team in the Majors on the day he takes the hill. Baltimore hasn't had that kind of dependability in the rotation since Mike Mussina signed with the Yankees.

Zach Britton is the Next Big Thing. Britton has been the darling of the Grapefruit League posting a 2-0 record with a minuscule 0.64 ERA in 14 innings. He is clearly deserving of the Jim Palmer Award that he was given after his performance in AA and AAA last season. Despite Britton's success and promise he's likely to begin the season at Norfolk rather than the O's rotation.

Given the many injuries of Justin Duchscherer, and the struggles of Bergesen and Tillman, it's likely that we'll see Britton in the Majors sooner rather than later. The Orioles won't need a fifth starter until mid-April. It's possible that a long reliever could make a spot start giving the team the chance to leave Britton in Norfolk until late April. If Britton isn’t called up until late April it will delay his free agency by a full season. It will also give the team a chance to give Britton and Tillman about three starts at AAA before they need to make a decision on who should be the fifth starter. I wouldn't be shocked to see Bergesen pitching out of the bullpen with Britton and Tillman in the Orioles rotation before the end of April.

Most Baltimore fans, myself included, will be thrilled with a near .500 record. Of course the ultimate goal of any team should be to win a championship. While that seems like a remote possibility for the 2011 Orioles, the continued development of Britton, Matusz and friends could make it a reality a few years down the road.