Songs For The End Of The Old World 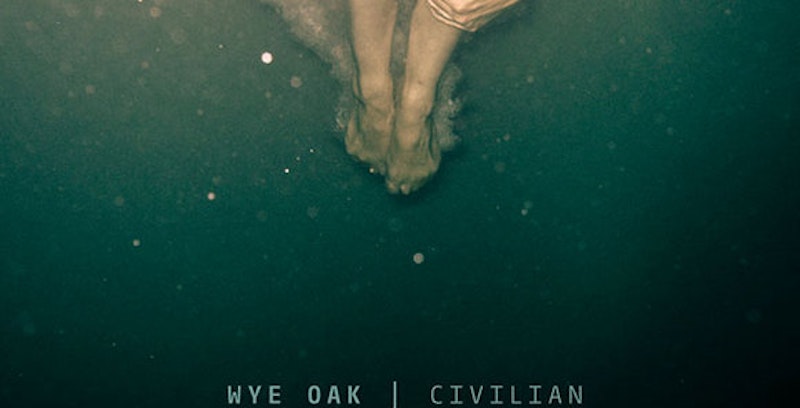 Heavy rain recently washed a month of winter’s snow into the streams of my town, and as night fell, the waters crept through the darkness towards the house.

Headlights from the cars at the top of the valley would cast an occasional glimpse of what was happening out in the yard, but distinguishing the ripples of water from the shivering of beaten grass was still impossible. As the shadows crept up the bases of the trees, it became clearer that the darkness was a rising waterline: no beacons of white birches in the lawn, all indistinguishably gray maples and oaks. We ran through the rain and backed our cars to the top of the driveway, all in a row, our own headlights doing no better job of cutting into whatever was happening out there. It’s the blindness that kills you, unknowns washing away unknowns.

If Arcade Fire’s The Suburbs sounds like the beginning of a new world, Wye Oak’s comparable Civilian sounds like the end of the old one. It starts slow and quiet, maybe a little bit expected and familiar, but immediately singing about the first deaths. By the time that the third song comes around, the album becomes a beautifully plaintive plea for affection, singing words like “holy” and “hold me” with equally sacred energy and concern, the gently throaty vocals of Jenn Wasner carrying the music to places that feel somehow important.

Song four, “Dog Eyes,” is where things go strange and awesome, pushing the band out of the “dream pop” label and showing off some more complicated, nontraditional musical arrangements. This is where the realization sets in: everything is changing, quickly, and there’s nothing we can do about it.

Song five, “Civilian,” is rich with melody and lilting, sad vocals. This is where the end of the world begins, building into a stunning, apocalyptic crescendo before allowing the second half of the album to recover. Song six: “Fish.”

As we traveled around the upper Hudson Valley, after the storms had subsided, we drove across rivers that had etched new paths on both sides of the roadway and were having trouble finding their way back, driveways that collapsed from erosion, trees that tore themselves from the soft soil. At times, along the quiet roads, it became difficult to imagine that anyone was still living in these houses, or driving parked these cars.

It feels stunningly appropriate that the cover of Civilian is someone submerged, as water provided the context in which the band truly became alive. Both Civilian and The Suburbs, bookends from two different bands, are titled from places just outside of the main action, casual observers of the bigger world, but never a participating member of the stuff that’s going down.

The album ends with “Doubt,” an inconclusively sparse song of uncertainty, a voice and a guitar, all that’s left after a very rich experience, exquisitely peaceful and despite trepidation, ready for what comes next.